Solved! What Is a Composting Toilet?

With increasing concern over water conservation, these devices are becoming more and more popular. If you’ve been wondering, “What is a composting toilet?” we have the answer. 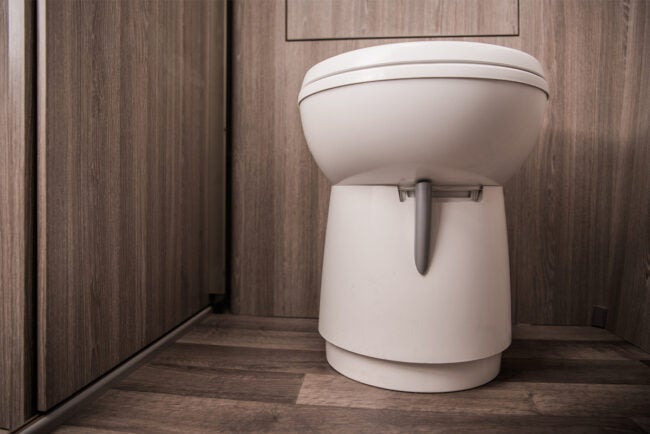 A: The question of exactly what is a composting toilet is a common one, and there are some understandable concerns. Let’s be honest, a lot of people worry that having a container of poop sitting in the house will be smelly and not very sanitary.

The truth of course is that if these were real problems it’s unlikely composting toilets would be so widely used in homes, RVs, boats, and public places. This article provides a detailed look at the facts, talks about the benefits, and clarifies how to use a composting toilet and how to deal with the waste.

How does a composting toilet work?

Composting toilets use a completely natural process of decomposition and evaporation that is free of harmful chemicals. How particular units function is discussed in the next section, but in essence aerobic bacteria break down the material in much the same way as happens in a compost heap, but in a closed container.

This has two significant benefits. First, the composting toilet is clean and safe to use indoors. Second, the combination of warmth and moisture is a great environment for the bacteria and so accelerates the process. The resulting compost manure (often called humanure) is harmless, because the microbial action has broken down any disease-causing germs and viruses. It is also easy to handle and dispose of.

There are two main types of composting toilets.

Now we’ve answered how composting toilets work in general terms, it’s time to look at specific examples and how they work in particular situations. We’ve also offered a couple of examples of popular products from leading manufacturers to illustrate the user-friendly features available.

A self-contained composting toilet is probably what most people think of when the subject comes up. The smallest of these can be portable, and are often used in RVs, boats, or cabins. Others can be fitted in basements, garages, or guest accommodation where normal plumbing is difficult.

They are generally made of tough polypropylene, which is easy to clean. Liquid may be contained, but is often drained away. Solids are composted in a removable container. Self-contained composting toilets are usually fitted with a vent to expel any gases that build up. These are frequently fan assisted, and can often run off either household AC supply or a 12V DC battery.

Our Recommendation: Separett Villa 9215 AC/DC – Get at Amazon for $989.00
This is a full-featured waterless model at a competitive price. It is easy to instal with several venting and drainage options. It runs off AC, DC from a battery, or potentially from solar power. The compost container uses recyclable bags for convenient disposal. It is a fine example of the many benefits composting toilets offer, which is why it’s a top pick in our researched guide to the best composting toilets.

Central system composting toilet systems, also called split systems, are very much like standard toilets that hook up to a septic tank. The bathroom is connected to central collection in the form of a tank or drum, which is installed below or adjacent to the toilet level. Unfortunately it’s seldom practical to install them outside because the tank needs to remain warm for the composting action to be effective. On the flip side, with composting tanks that are positioned below the toilets, gravity takes care of waste. As a result they don’t require continuous electricity supply, making them ideal for substantial off-grid locations.

Installation of central systems is more complex, and hence more expensive, and it’s a good idea to check local building codes before purchase. Another big advantage with central composting toilet systems is that several toilets can be connected, and they have greater waste capacity so don’t need to be emptied as often.

Our Recommendation: Sun-Mar Centrex 3000 High Capacity Central System – Get at The Home Depot for $2,149.00
Sun-Mar is one of the leaders in central compost toilet systems. This is a non-electric, low-water model that uses a patented Bio-drum for rapid composting. It is rated for families of up to 11 in seasonal/vacation use, or up to 8 in residential installations. It comes fully assembled and ready to connect. A one pint flush toilet is also required. A waterless model is available, but requires an additional kit and dry toilet.

Why use a composting toilet?

Composting toilets have two main advantages. One is flexibility of installation. You can use a composting toilet in places where conventional plumbing isn’t possible, or where there’s no continuous electricity supply. This makes them ideal for RVs, boats, and off-grid living. Their use by the National Parks Service is a good example of this.

The other is water saving. According to the EPA toilet flushing can account for 30 percent of a home’s water usage. Older toilets use up to 6 gallons per flush. Even modern ‘WaterSense’ models use a gallon or more. Many composting toilets use just a pint; some use no water at all. That water saving is not only good for the environment, but it can also have a dramatic impact on household bills. That in turn helps offset the composting toilet cost.

Does a composting toilet smell?

It has to be the most common question, and a perfectly reasonable one. The simple answer is no. When functioning properly, composting toilets do not stink. Why not? It’s partly to do with the construction of the toilet, and partly the way it works.

Human waste has an odor, of course. In a standard toilet that is immediately flushed away. In a composting toilet, bacteria get to work quickly, and though there is a delay while the action takes effect, the fact that the waste is held in a sealed container helps contain odors. Venting also carries odors away. The addition of a small amount of organic matter, usually sawdust, suppresses the odor while the microbes get to work. Together these features make composting toilets as odorless as traditional models.

The composted waste eventually has to be removed of course, but just like garden compost, the remaining material has very little odor. Some composting toilet owners compare it to the smell of damp leaves.

Apart from regular cleaning, a standard household toilet is a maintenance-free device, although septic tanks need to be emptied periodically. Composting toilets need to be emptied more frequently, but the task is seldom as onerous as many people fear.

Depending on the model and the installation, liquid waste is often treated as grey water, and drained in the same way as ordinary toilet, washer, or dishwasher waste. A central compost toilet system may run 6 months or more before it is full. With self-contained models it depends on size. It can be anywhere from four to twelve weeks. Waste is often drier and lighter than people expect, thanks to microbial activity and evaporation. As already mentioned, there is almost no odor.

There is a misconception that it is against the law to put human waste in the trash. That’s true of raw sewage, but not for the treated material that comes out of a composting toilet. It is no more illegal than disposing of dirty diapers or kitty litter.

Most keen gardeners would see dumping the output in the trash as a waste of a valuable free resource. The eco toilet aspect goes beyond just water saving.

In many ways it is a far superior product as compared to chemical fertilizers. It is natural, biodegradable, and full of fiber that improves the structure of the soil. It also contains organic nutrients, rather than synthetics, that enhance plant growth. In addition to passing through the body’s own filtration system it has also been processed by composting bacteria and microbes. As a result, while some people might not be keen on the idea, it is completely safe for use on fruit and vegetables.

Types of Toilets to Know for Your Next Bathroom Renovation
Advertisement

It's All in the Flush! Low-Flow Toilets' High Impact

10 Things Never to Flush Down the Toilet