Solved! What is a Kamado Grill?

Anyone can chuck some charcoal briquettes into a kettle grill and cook up a half-decent burger. True enthusiasts, people who spend a significant portion of their summer in search of the perfect sear, should consider stepping up their grilling game with a kamado. 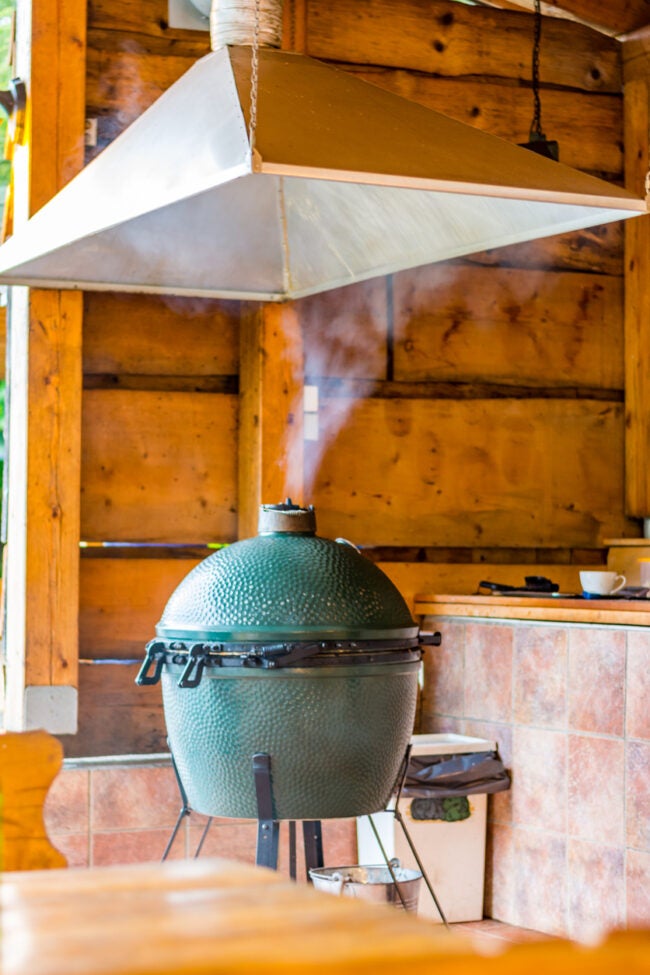 Q: My wife and I just bought our first house, which has a beautiful deck overlooking a huge backyard. Since we finally have the space to entertain outdoors, it’s high time we replaced our rinky-dink, rusted-out hibachi. I’m tempted to try something new. What is a kamado grill, and what sets it apart from a “regular” one?

A: A modern iteration of the classic clay pot that humans have been cooking in for centuries, a kamado grill ticks all the boxes when it comes to outdoor cuisine. It’s far more versatile, efficient, and durable than the typical backyard grill. Most important of all, once you master it, this heavy-duty workhorse will consistently create better-tasting food.

This ovoid apparatus’s otherworldly appearance—fresh-air chefs of a certain age might find themselves channeling Mork from Ork—belies its versatility. Like many other examples of cult-classic kitchen equipment, kamados have a legion of avid fans. Read on to learn the reasons why.

Most of today’s kamado grills are made of ceramic.

Cooking in clay pots is nothing new, of course. The oldest such vessel dates back an astonishing 15,000 years. (Believe it or not, researchers have determined what it was used for: a seafood stew!) Cultures around the globe have continued to explore and refine various methods of preparing meals, but we keep circling back to ceramic. That’s because it’s remarkably effective at making food taste good.

Ceramic cookware can withstand extremely high temperatures of up to 800 degrees Fahrenheit—substantially more than the average household oven, which maxes out at 500 or 550 degrees Fahrenheit. But the benefits don’t end there. Ceramic cooks food more evenly, stays hotter for longer, and retains moisture. Moreover, it’s an incredibly durable material. These qualities make the kamado grill a worthy addition to any backyard, whether you’re just getting started as an alfresco chef or you practically live in your outdoor kitchen when the weather warms up.

Kamado grills themselves have a pretty impressive history as well. Similar wood-fired ovens originated in China during the Qin Dynasty and were subsequently imported to Japan. At first, they were used mainly for preparing the culture’s staple of rice. It wasn’t long before a grate was added so meats and fish could be cooked in the kamado directly. For millions of people in Asia and elsewhere, the kamado wasn’t a cooking vessel—it was the cooking vessel.

Fast-forward to World War II, when American servicemen stationed in Japan discovered the delights of these sturdy ceramic cookers and decided to bring them back home. But it would take several decades before this style of grilling started to gain traction in the United States.

In 1974, a fellow named Ed Fisher started selling a kamado-style cooker with a memorable name: the Big Green Egg. Sales were sluggish to start until Fisher hit upon the idea of grilling up chicken wings at his Atlanta strip-mall store. The irresistible scent wafted across the parking lot, tantalizing potential customers like an olfactory sales pitch.

Kamado grills can be used for a variety of cooking methods.

The word “kamado” has been variously translated as “oven,” “hearth,” “stove,” and—most poetically—“place of the cauldron.” Modern versions are just as multifunctional as their clay-cooker forebears. In addition to serving as a grill, a kamado works equally well as an oven for baking up a crusty loaf of sourdough or a peach cobbler, a smoker for the “low and slow” BBQ method that pitmasters swear by, and even a wood-fired pizza oven. Kamado devotees say the super-hot temps these spheres can reach are the secret to superior backyard pies. And as for getting a great sear on that sirloin, the kamado reigns supreme.

A common mistake made by novice grillers is trying to do too much at once, especially when working with foods that have radically different cooking times. When quick-cooking items like shrimp, asparagus, corn on the cob, and mushrooms compete for grate space with, say, a pork butt, thick New York strip steaks, or a whole fish, something’s going to suffer. Kamado grills are roomy enough to allow for tiered racks and other accessories that effectively create two temperature zones.

Additionally, ceramic cookers feature both a top vent and a draft door, which can be adjusted to regulate the temperature. This requires a bit of a learning curve, but after a little practice, you’ll be adept at fine-tuning the airflow to achieve pretty precise results.

Thanks to these two features, you can say goodbye to cold side dishes and to meals spread out over four or five courses in the span of an afternoon.

Any grilling geeks worth their Himalayan pink salt know that lump charcoal—essentially hardwoods that have been burned to create pure charcoal—is far superior to ordinary briquettes. Lump charcoal burns hotter and longer and produces substantially less ash than briquettes, which in turn improves airflow inside the cooker’s spherical interior.

When the lid is closed, a kamado retains such a steady, long-lasting level of heat that it can be left unattended, or minimally attended, for up to 12 hours. With regular grills, someone has to be on standby, tongs at the ready, lest the burgers burn; kamado aficionados are freed up to chat or play games with friends and family once the process is underway. (For safety’s sake, it is not recommended to leave a grill of any kind unattended, but isn’t it good to know that you could?)

Particularly when using a chimney starter, electric starter, or firestarter, lump charcoal is also generally easier to get going than its supermarket counterpart. That means no more toxic lighter fluid fumes—and a drastically reduced risk of burns that occur when a not-so-sober someone decides the flames aren’t high enough.

Solved! This is the Best Time to Buy a Grill
Advertisement