Whose Responsibility Is It: Homeowner, Town, or Utility Company?

Are you on the hook financially for backed up sewer lines, downed trees, and clogged storm drains? Understand your rights and responsibilities as a homeowner. 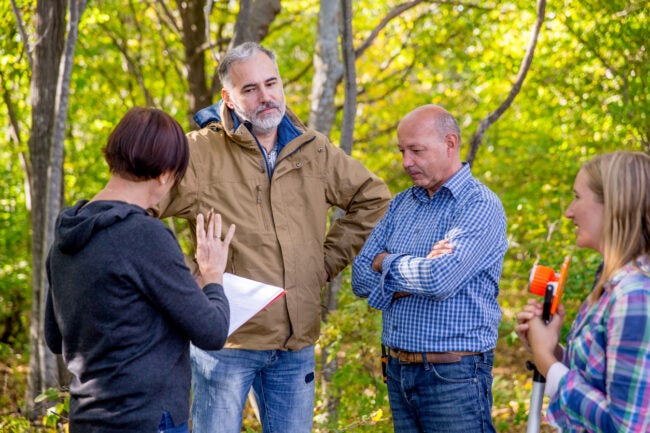 First-time homeowners might be surprised at some of the things that they are responsible for maintaining, such as having to clear away snow from the sidewalk in front of their home or mowing the grass in the city’s easement near the street. While duties and ordinances differ between communities, property care practices are generally split between homeowners, the city, a homeowners association (HOA), and utility companies. It’s a good idea to familiarize yourself with your community’s rules to know when you’re responsible or when responsibility falls elsewhere.

RELATED: 10 Things Homeowners Need to Know About Their Property Rights

Is the homeowner responsible for trimming trees that grow into overhead power lines?

Trees growing under or next to electrical power lines pose a hazard if their branches reach high enough to interfere with the cables. In most states, the utility company that owns the cables is responsible for trimming trees. The utility also has the right to enter your property to complete that tree trimming.

While this might upset some homeowners who don’t want to see a tree cut back, the utility must ensure power delivery to all its customers. Heavy snow on branches or high winds can cause power outages if trees are near power lines. It’s not the homeowner’s duty to trim the trees, but it’s helpful to notify the utility company if you notice branches growing close to the cables.

The sewer is backing up—who pays to fix it?

Few home-related issues are as disturbing as sewage backing up into a shower drain. The problem could lie anywhere along the sewer line. The responsibility for fixing it is determined by whether the blockage lies on the homeowner’s side or the city’s. The point where the homeowner’s sewer line connects to the municipal sewer system is considered the spot where responsibility changes.

If a sewer backs up because tree roots infiltrate the sewer line in your yard, you’ll have to pay for the repairs. If the blockage lies in the sewer main, the city should foot the bill for repairs.

Does the homeowner have to mow the part of the yard the city owns?

In many communities, the city maintains an easement of a few feet next to the street. This area is often located on the street side of a sidewalk, although the easement still exists even if there’s no sidewalk. While a municipality might restrict what a homeowner can and can’t do on this yard strip (building a fence or planting trees), the homeowner is usually responsible for keeping that area tended, including watering grass and mowing it when needed. If the homeowner fails to mow that area, the city may hire someone to mow it and bill the homeowner for the expense.

Who’s responsible for damages if a neighbor’s tree falls in your yard?

A falling tree, or even a large branch that falls from a tree, can do expensive damage to a roof, fence, or landscaping. Fortunately, the cost of necessary repairs is often paid by the injured party’s homeowner’s insurance policy (but check your policy to be sure). However, according to Allstate, if the tree falls on your car, your homeowner’s policy is unlikely to cover the damages. In that case, try filing a claim with your auto insurer.

RELATED: Solved! What to Do When a Tree Falls on Your House

You severed a buried phone line while digging; who pays for repairs?

It’s never a good idea to dig in your yard until all utility companies have marked their buried lines. Most buried lines lie at least 2 feet below the surface, but some may be less than a foot deep. If you sever a phone line while digging, the phone company might send you a bill for the repairs. An exception is made if you did your part and called 811 (Dig Safe) before digging but the utility company failed to come out and mark the lines for you. In that case, the utility company should pay for the repairs.

After a snowstorm, who should dig out buried fire hydrants?

If you live in a region which sees heavy winter snows, likely, the city’s fire hydrants will occasionally be covered by a thick blanket of white stuff. While the community’s protective services are ultimately responsible for making sure the hydrants are dug out, the city will often encourage residents to dig out fire hydrants on or near their property.

Covered hydrants are a safety issue, and if firefighters have to dig out a hydrant before they can attach a hose, valuable firefighting time is lost. Communities such as Vail, Colorado, regularly encourage residents to clear snow away from hydrants if they’re able to do so.

Is the homeowner or HOA responsible for clearing storm drains?

Homeowner associations often get a bad rap for implementing restrictive construction, landscaping, and maintenance policies, but they have upsides, too. HOAs usually assume responsibility for maintenance of a neighborhood’s common areas, including clearing clogged storm drains to ensure proper water drainage. If you notice a storm drain is backing up, a call to HOA leadership will often result in a crew showing up to clear the drain.

How to Find Property Lines

How a Comprehensive Short-Term Rental Strategy Can Boost Your Ren...