Are hydrants the city’s responsibility, or the homeowner’s? Can residents park in front of hydrants on their property? Here’s what you need to know. 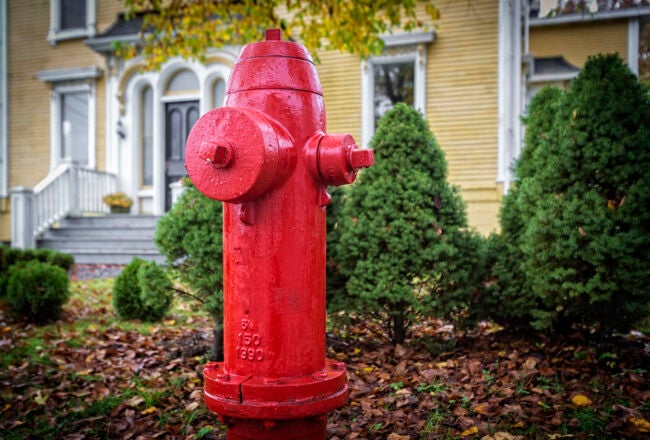 A fire hydrant is essentially an above-ground connection that allows firefighters to draw a large amount of water from the water main in order to control and put out fires. Because fire is a risk to just about any existing building, yard, or street, there is typically a large number of hydrants in a city, including many that are installed on residential streets. Having a fire hydrant in close proximity to your residence is good news for anyone concerned about fire hazards, but having a fire hydrant on the property can create unique challenges for the homeowner. Here’s what you need to know about having a fire hydrant on your property, and how it can impact your responsibilities as a homeowner.

Keeping the hydrant free of snow is a shared responsibility.

Depending on where you live, there may be local guidelines and regulations that state the responsibility for keeping the hydrant clear of snow falls on the city because it is a publicly owned addition to the property. Other cities, however, have instituted bylaws that put the responsibility of keeping the hydrant cleared of snow on the homeowner. Check with your local fire department or city hall to find out what the local regulations are for your town.

Even if the city is technically responsible for keeping the hydrant clear, however, it’s in the homeowner’s best interest to take a few minutes to clear the hydrant after a snowfall. After all, a city employee who lives across town won’t be impacted by your home burning down because the firefighters couldn’t gain access to the hydrant in time. It’s best to consider the fire hydrant a shared responsibility, one that can keep your home safe if it’s properly maintained and cleared. In warmer months, it’s also in a homeowner’s best interest to make sure the hydrant is clear of overgrown grass, shrubs, or other plants.

A fire hydrant on the property can reduce homeowners insurance rates.

While clearing snow from a fire hydrant does take extra effort and time, having a fire hydrant on the property isn’t a bad thing. In fact, if there is a fire hydrant on your property be sure to share this information with your insurance company, because they may well reduce your homeowners insurance rates. The reason for this is relatively obvious: The closer a fire hydrant is to your property, the more likely it is that firefighters will be able to prevent significant damage to the home if it catches fire.

Related: The Best Smoke Detectors of 2021

Homeowners can still be ticketed for parking next to the fire hydrant.

Emergency responders who need to gain immediate access to a fire hydrant won’t stop to consider why someone decided to park in front of the hydrant; they will simply do whatever it takes to connect the hose as quickly and efficiently as possible. (If need be, they may well break the car’s windows to run the hose straight through the car.) Most people are well aware of this risk and avoid parking in front of hydrants, while others are more worried about the fine they may incur and park in a different location for this reason.

Having a hydrant on your property should keep the street in front of your home clear of cars, your car included—the property owner’s car can be ticketed, towed, or damaged to gain access to the hydrant as easily as anyone else’s vehicle. However, it should be noted that a car parked in a private driveway will not be ticketed if the driveway happens to be beside a hydrant because the car does not obstruct access to the outlet valve of the hydrant.

Related: 10 Things Homeowners Need to Know About Their Property Rights

Most fire hydrants are painted in a bright yellow color that’s easy to spot, but others hydrants might have different colors on their tops, nozzle caps, or even the bodies of the hydrant. These color codes include red, orange, green, and blue, while the yellow coloring doesn’t have a meaning attributed to it beyond being a high-visibility option. What does all this color coding mean?

Fire hydrants should be inspected once per year.

If you have lived for several years at a home near a public fire hydrant, it’s likely that you have seen the fire department or city workers test the hydrants. They are supposed to do this at least once a year to ensure that hydrants are in working order. These inspections don’t take long and usually don’t inconvenience homeowners, but if the fire hydrant is privately owned, then it’s the responsibility of the homeowner or business owner to have the fire hydrant inspected. Simple inspections are the key to avoiding future complications.

Related: 15 Warning Signs to Look for Before Making an Offer on a Property

It’s unlikely that a fire hydrant will be moved, even if you request it.

Some people move into a home thinking that anything they don’t like about it can be changed or removed. Before you commit to buying a home that has a fire hydrant on the property it’s important to note that most cities are not willing to move a fire hydrant, even if you ask them to. It doesn’t really matter why you think the fire hydrant should be moved—if the city or fire department does not have a specific concern with the placement or construction of the hydrant, they won’t move it.

The reason for this is simple: Money. It costs over $6,000 in parts alone to replace a fire hydrant. This doesn’t include the cost to dig up the water main, or the labor costs for the city employees who do this. Homeowners can be liable for any damage done to a public fire hydrant, so it’s in your best interest to purchase a different property, or do your level best to protect and maintain the hydrant.

9 Safety Rules You Should Always Follow Around the Fire Pit

The 25 Most Dangerous Plants for Your Pet

These Are the Most Dangerous Insects in America

10 Accidents Waiting to Happen—and How to Stay Safe

8 Ways to Make Your Bathroom More Spa-Like This Year