Even with as much as we know about the dangers of lead poisoning today, traces of lead may still be entering the water supply. Here's what homeowners should know. 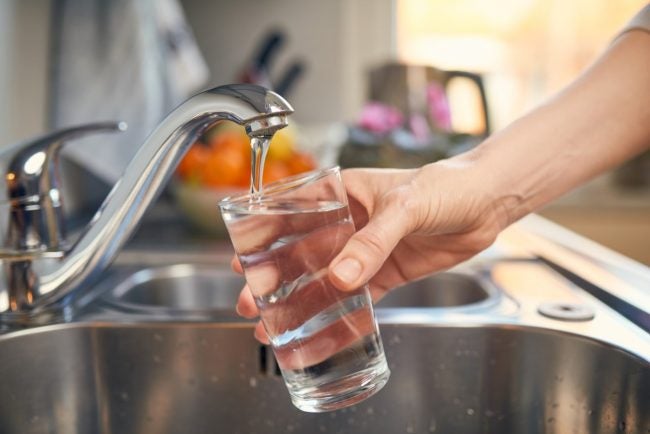 In some cities across America, children and adults are exposed to a dangerous contaminant with every glass of water they drink: lead. Nearly all homes built before the 1986 Safe Drinking Water Act have either lead pipes or lead solder in the plumbing systems, and up to 10 million homes still have lead service lines that connect the main municipal water pipes from the street into the home. Many major U.S. cities and towns even have lead pipes as part of the main water delivery system.

Lead has been a ubiquitous plumbing construction material since the Romans invented specialized water delivery systems—so much so that the word “plumbing” actually is derived from the Latin word for lead, “plumbum.” Its malleability and flexibility enabled pipes to be formed and manipulated into shapes that could channel water efficiently under and into existing buildings. Lead also is a stable, durable metal that is nearly impervious to moisture, resisting corrosion and the pinhole leaks. Lead’s durability, versatility, and affordability made it a popular construction choice for plumbing systems in the United States, where lead pipes were considerably less expensive than iron alternatives.

Although some health concerns were raised as early as the 1800s, no attempt to ban or limit the use of lead in plumbing was made until the 1920s, when lead poisoning became an increasingly prevalent public health issue. Even then, efforts to prohibit the use of lead were stymied when the Lead Industries Association was formed in 1928 to strongly support the continued use of lead pipes, lobbying against changes to municipal building codes; the trade group remained active through the ‘70s. Evidence about the dangers of lead poisoning continued to mount.

Today, the Environmental Protection Agency and The Centers for Disease Control agree that there is no known safe level of lead in a child’s blood. According to the CDC, even low levels of lead can lead to the following health problems.

Get a professional consultation
Connect with lead abatement specialists in your local area and receive free, no-commitment estimates.
Talk to a pro

Who May Still Be Affected by Lead Pipes

The 1986 Safe Drinking Water Act mandated that new plumbing materials be lead-free, including plumbing used for public water supplies. However, there are still many ways that lead enters drinking water. You may be exposed to small traces of lead if:

The EPA expanded its commitment to reduce lead in drinking water with the passage of the Lead and Copper Rule in 1991, which requires regular water sampling and testing and recommends the replacement of lead service lines. Total replacement, however, is a pricey proposition: The EPA estimated in 2016 that the cost to replace all lead service lines in America—an estimated 6.5 million to 10 million lines—would run from $16 billion to $80 billion. To assist in this effort, the EPA and the Department of Housing and Urban Development (HUD) launched a dedicated page on epa.gov in October 2019 to collect information on the various federal programs that are available to help finance lead service line replacement. (The website also features case studies demonstrating how cities and states have successfully leveraged federal resources to support these replacement projects.)

RELATED: These Are the Places with the Worst Tap Water in America

How to Know What’s In Your Water

A key component of the 1991 rule requires all community water systems to provide an annual water quality report, the Consumer Confidence Report (CCR), to each water customer by July 1 every year. This CCR details where your drinking water comes from and lists the levels of contaminants in that water. People who rent houses or are living in apartment buildings, condos, or townhouses can contact the local water utility for a copy of the latest report.

Homes with wells or private water supplies—estimated at some 15 million U.S. households—are responsible for testing and maintaining the quality of that water. The EPA recommends that private water supplies be tested annually by state or local health and environmental departments or by a state-certified laboratory. Testing typically costs between $20 and $100.

What You Can Do if You Live with Lead Pipes

If testing reveals that your water is contaminated by lead, there are several steps that you can take to mitigate the impact, according to the CDC.

Finally, if you believe that you, your family or your children have been exposed to lead, it is important to contact a health care provider. Many people exposed to lead exhibit no symptoms, and the only way to determine lead exposure is with a blood test. A health care provider can assess the risk of lead poisoning, recommend a blood test for lead, and determine an appropriate course of treatment if lead exposure is found.

Get a professional consultation
Connect with lead abatement specialists in your local area and receive free, no-commitment estimates.
Talk to a pro

10 Times Doing It Yourself Doesn’t Save You Money
Advertisement