Every handyman should have a pocketknife at the ready. 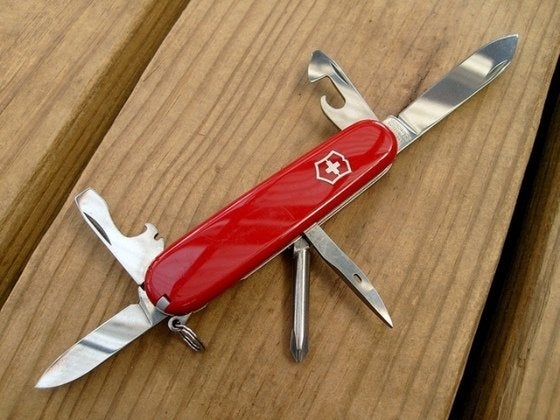 A pocketknife is, simply, a knife with one or more blades that fold into its handle, of a size that will fit conveniently into one’s pocket. Whether the one you favor is called a jackknife, folding knife, pocketknife, Swiss Army knife, or whatever, they’re all related.

In my opinion, some sort of pocketknife belongs in your pocket most of the time. A good pocketknife comes in handy when you need to remove one or two screws—and your tool kit and screwdrivers are not at hand, or for whittling a point on a stick or for trimming off an edge of this or that. I’ve never known an electrician who didn’t have a jackknife in his or her pocket. And, I must admit, over the years, I’ve seen a few folks open a bottle or two at the end of the working day with a pocketknife.

The variety that will serve you best depends upon the kind of work you do, but almost certainly there’s a model out there that will prove its worth again and again.

Army Knives. No doubt the most versatile models are those that have come to be known by the generic name of Swiss Army knives. Some are actually made in Switzerland according to Swiss Army specifications, but there are probably more knockoff models on the market featuring the Swiss Army cross than there are troops in the Swiss Army. Not to mention the countless other models that don’t feature the familiar red plastic casing but do feature a similar range of implements within.

So-called Army knives and their relations have two knife blades, usually one that’s two and a half inches long and roughly half an inch wide with another about half that size. There are at least two other blades on most models, typically a pair of screwdrivers. One is small enough to be usable on Phillips-head screws with another, larger one for slot-headed screws. Both these blades have additional uses, as the smaller driver typically has a hook on its edge that can function as a can opener, while a bottle opener is found at the base of the larger driver.

From there, the variations are almost endless, as the options include a toothpick, tweezers, scissors, a tiny saw, an awl, another Phillips-head screwdriver, a file, and even a corkscrew. The bigger the knife, the more cumbersome it gets, however, meaning both a big bulge in the pocket and added weight. Perhaps more important, knives equipped with many of the optional blades are also cumbersome in the hand, making them less convenient to use to remove a single screw or score one cut line. I favor a simpler, more basic knife than the top-of-the-line, gee-whiz-it’ll-do-anything model.

Make sure when you purchase one of these knives, whether it was made in Switzerland or not, that the steel is stainless and that the knife looks well made. No rivets or joints should be visible and the blades should be honed sharp.

Folding Knife. By folding knife I mean simply a knife with one blade that folds into its handle. Again, there are more varieties of folding knife than there are rainy days in a rain forest, so surely there’s one for you. The good ones have fine steel blades and hardwood handles; some are handsome, almost art tools, others more workmanlike.

If you’re in the market for a folding knife, I’d suggest that a suitable one should have a locking mechanism, one that holds the blade rigidly in position, preferably both when the edge is stored away and when it’s open and ready to use. Various models have locking rings, set screws, and spring devices.

Examine the blade carefully, too: It should be of fine, stainless steel, and the edge should be precisely honed. The handle should fit comfortably in your hand. If it’s too small or too large or feels awkward, keep on looking until you find one that fits.

The Best Whittling Knives for Your Woodworking Projects

The Best Pocket Knives Tested in 2022