Everything you wanted to know about screws and bolts. 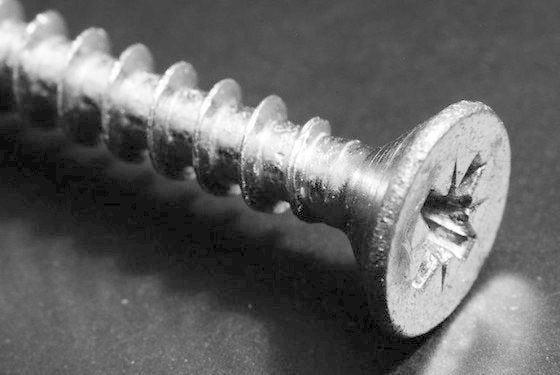 In general, a screw is driven by a screwdriver, alien wrench, or other device whose tip fits into an opening in the head of the fastener. The shaft may be cylindrical or conical, but whatever its shape it has helical ribs called threads. A bolt, in contrast, is a threaded metal rod or pin with a wrench head (typically hexagonal or square) around which a wrench or other device is fitted for tightening or loosening; the other end is secured using a nut. Wood screws have pointed (or gimlet) tips; bolts are blunt-ended.

The basic varieties and screws and bolts are these:

Wood Screw. A wood screw, as its name suggests, is intended for use in fastening wood or other materials to wood. Wood screws have tapered shanks, and are often threaded for roughly two-thirds of their length. They may be purchased in flat-, round-, or dome-head profiles. Lengths vary greatly, from fractions of an inch to five inches or more.

Phillips-head, slotted, and other drives are all commonly available. Brass, steel, aluminum, stainless steel, plated steel, and corrosion-proof materials are all used in making wood screws.

Drywall Screw. In profile, the drywall screw has a bugle-shaped neck, its head usually a Phillips slot (although finer-headed varieties are also available with a square drive). The thread generally runs the full length of the screw. Various sizes are sold, including one inch, inch and five-eighths, and three inches. The drywall screw is most often used to fasten wallboard, but is also suited to fastening softwood and man-made woods.

Machine Screw. Used to assemble metal parts, machine screws are usually made of steel or brass, with flat, round, oval, or cylindrical (called fillister) heads. Though it may also be used with a nut, the machine screw most often threads directly into a tapped hole in a metal workpiece.

Like other screws, machine screws are sold in varying lengths and gauges, but also with differing thread pitches. Thus, in buying machine screws the length, gauge, and pitch must be specified, as in “I need a box of 8-32 x Vi screws, please.” The 8 is the gauge; the 32 refers to the threads, namely that there are thirty-two threads per inch; the one-half to the length of the screw.

Sheetmetal Screw. Sheetmetal screws are designed to fasten together metal elements, like stovepipe, flashing, and other metal components. They are self-tapping screws, available in brass or steel, and with flat, round, oval, or fillister heads.

Lag Screw. Referred to interchangeably as a lag screw or a lag bolt (lag bolt is perhaps a more precise name), this fastener has a tapered shaft, with coarse threads that run about half its length. Lag bolt heads are hexagonal or square.

The lag bolt is essentially a longer and stronger version of the ordinary wood screw, though its head is driven using a wrench or socket. One common household use is in deck construction. Typically, lag bolts can be purchased in three-inch to six-inch lengths, though longer lags of up to a foot or more in length are to be found.

Stove Bolt. At one time, the name stove bolt distinguished bolts with coarse threads (machine bolts typically having finer threading). However, the term as used today generally means a bolt intended for use with a nut (as distinct from a machine screw or bolt). The entire length of a stove bolt’s shank is threaded. Stove bolts are usually- found in lengths ranging from three-eighths of an inch to four inches, in diameters from about an eighth to three-eighths inch

Carriage Bolt. Carriage bolts most often have rounded heads, with a shaped shaft immediately beneath the head. Usually the shape is square (though finned and ribbed varieties are also sold). Whatever its shape, the shaft neck is set into an opening in the workpiece, and prevents the bolt from turning as the nut is tightened or loosened. Typically, only a third to a half of the bolt’s length is threaded.

Carriage bolts are sold in a wide variety of lengths, from an inch or less to twenty inches or more, in diameters from about three-sixteenths to three-quarters of an inch. Flat washers are generally used between the nuts and wood surfaces Machine Bolt. These are rodlike threaded bolts with wrench heads that are square or hexagonal in shape. When used with a nut, two wrenches are required to tighten the machine bolt.

Washers and nuts. Flat disks called washers are used to prevent the marring of the material being fastened, to help secure the bolt or nut, or to cover a hole that is larger than the head of the screw or bolt. Nuts, like screws, come in a vast array of shapes and sizes, in cluding those with hexagonal, square, wing, and acorn (or cap-head) shapes, with a flange attached (flanged nuts look as if a washer is an 233 integral part of the nut), and other varieties as well.

Hangers, wall fasteners, and anchors. As many types of screws and bolts as there are, there are even more hangers, anchors, and fasteners. There are molly bolts and toggle bolts; screw eyes and shoulder hooks; lead, hollow-wall, nylon, and plastic anchors; and a considerable number of other options.

5 Types of Screws Every DIYer Should Know