Need to locate a wall stud, but don't want to buy yet another gadget? Learn how to use magnets, baseboards, and even smartphones to guide your way. 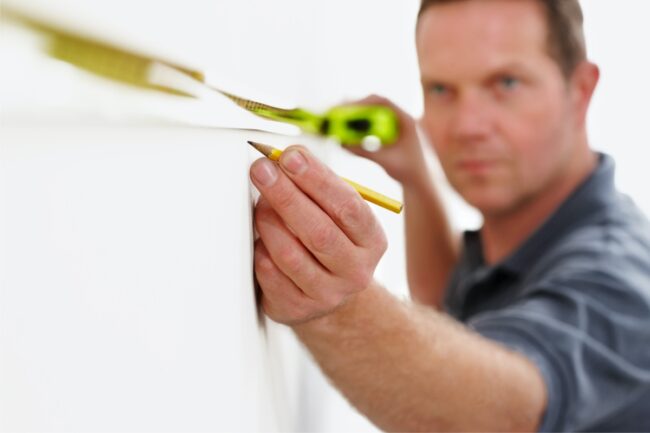 We’ve all been there, right? “Oh, I just need to find a stud to hang this picture.” And 15 holes later, you’re convinced the wall is held up by pixie dust and a wish, because apparently there’s no wood behind it.

A stud finder is one way to locate the framing hidden behind the drywall, but that does you little good if you don’t happen to have one in your arsenal of tools. Stud finders can also be frustrating to use, often failing to detect anything or delivering false positives.

Whether you don’t have a stud finder on hand or simply don’t trust the things, there are several effective alternatives to locating a stud without one of these tools.

What are studs, anyway?

With these points in mind, read on to learn multiple strategies for how to find a wall stud.

1. Look at the trim for where it has been nailed to a stud.

Since the baseboard is attached to the studs, inspect the baseboard and try to determine where it has been nailed. These holes, called dimples, are usually filled with caulk and then painted, but you may be able to spot one to identify the whereabouts of a stud. If you find a dimple, measure in 16-inch increments to locate studs to each side of it.

2. Locate the switches and outlets, which indicate a stud.

If baseboards don’t offer any clues to the stud’s whereabouts, look for a light switch or electrical outlet. At least one side of an electrical box must be mounted to a stud. To determine which side of the box the stud is on, use the “knock test” by rapping on either side of the switch or outlet. The side that returns a solid, versus hollow, sound is the stud side. Next, measure about ¾ inch away from the outlet on the stud side and use that as a starting point to determine the 16-inch intervals of stud spacing.

3. Measure 16 inches from the corner.

With studs generally 16 inches on center, you can also do calculations by measuring from a corner of the room. Now, all rooms aren’t built in numbers divisible by 16, so you are likely to have a stud that is less than 16 inches from one corner.

Try the “knock test” near the corner to see if you can determine where the shorter stud spacing might have been added. A hollow sound when you knock indicates that there’s nothing behind the drywall, while a more solid sound would suggest that there’s framework there to screw into.

This only really works if you’re measuring a corner of the exterior of the house. But it’s worth a shot before you go crazy with the test holes, wondering how far apart the  studs are in your walls.

4. Use a magnet to locate metal fasteners.

One of the easiest ways to detect a stud is to use a magnet. While the magnet won’t help detecting the wood stud itself, it will help you locate the metal screws used to attach the drywall to the studs.

You can’t just use any ordinary magnet off the fridge, though. Since the screw heads will likely be covered by spackle, you’ll need a strong neodymium magnet, which is the strongest commercially available magnet you can buy.

Move the magnet slowly around the wall’s surface until you feel it pull to one of the screws. If you use the right magnet, it should be strong enough to stick to the surface of the wall at the location of the screw head, making it easy to mark the stud’s location with a pencil.

If you had your home built (or you’ve ever gut renovated it), you may have taken photos of the house at different stages of its construction, including when it was down to the studs, with no drywall. If that’s the case, you can use these photos to give you at least a general idea of where studs are located.

Using the pictures, note where the studs are in relation to features that are currently visible in the room–corners, doorways, electrical outlets, and light switches. Going forward, it’s always a good idea to take plenty of pictures any time your home is undergoing a renovation that involves exposing the framing.

If all else fails, use a stud finder.

There’s no shame in keeping a small stud detector in your toolbox, really, and you’re bound to find more uses for it than just to hang one heavy frame. Floating shelves, bathroom mirrors, flat-screen TVs can all benefit from the secure hold of a stud. Our researched guide to the best stud finders on the market and this primer on how to use a stud finder are terrific resources about selecting and using this tool.

Understanding the anatomy of a wall can help you use one of the above techniques to locate a stud, and potentially eliminate the need to buy yet another tool. These techniques are also helpful backups for DIYers who do own a stud finder, but want to check the accuracy of the stud finder’s readings before making a hole in the wall.

Whichever strategy you use, proceed with caution when drilling holes in your walls. Interior walls contain wiring, plumbing lines, and gas pipes that can cause personal injury or damage to your home if you happen to hit them with a drill bit. You should be reasonably confident of a stud’s location before gearing up your drill.

Though the five techniques described above will help you identify the location of a wall stud, they aren’t the only ways to do so. Ahead, learn how your smartphone and stud spacing can make it easier to locate wall studs.

Q: Can I use my phone as a stud finder?

Yes. There are many free and paid smartphone apps that function as stud finders. These apps use the phone’s internal magnetometer to detect the strength of the magnetic field. While these apps won’t detect the stud itself, they can detect the screws holding the drywall to the stud.

Q: How far apart are studs in a wall?

Most wall studs are spaced 16 inches apart on center; however, they can also be spaced at 24 inches. That said, spacing isn’t always exact. Studs can bow and twist up to 1 inch in either direction as a home settles.

Q: How deep are studs behind drywall?

Drywall is attached flush to the studs, so the stud’s depth depends on the thickness of the drywall. The most common drywall for interior walls is 1/2-inch thick. You may also encounter thicker 5/8-inch drywall, which is sometimes used for ceilings or with rooms that require soundproofing.

Advertisement
TAGS:
HOW TO
WALLS
INSTALLATION
More From Bob Vila

This Stud Finder Requires No Calibration―Is it Right For You?
Advertisement