Step Inside a 1930s Beach House Revamped for the 21st Century 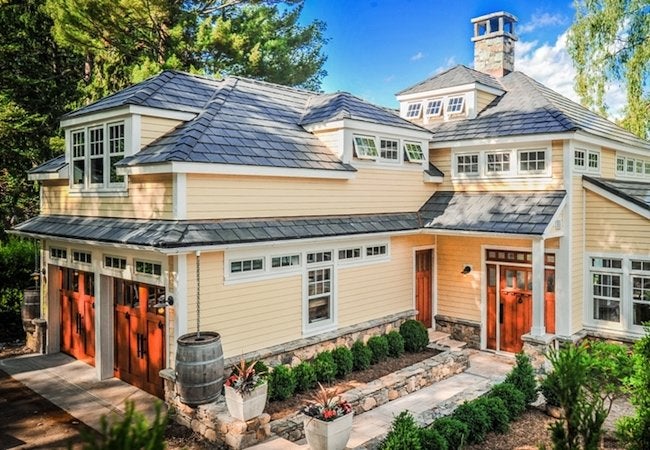 When its current owner first encountered this home on the shores of Truesdale Lake in Upstate New York, it was in a wretched state of disrepair. Built in 1932, the bungalow had deteriorated slowly but surely, inside and out, until nothing short of a whole-home gut renovation would be enough to make it appealing as a lakeside respite. In purchasing the property, however, the new owner set out to build it back even better than before, combining contemporary design with sustainable materials and energy-saving technology.

To achieve her vision, the homeowner called on Absolute Green Homes, a firm steered by Sylvain Côté, who routinely marries stand-out beauty with eco-friendly pragmatism. In each of his projects, Côté adheres to the philosophy that, “If it is not beautiful, it is not sustainable.” Just consider: If a design fails aesthetically, it’s only a matter of time before someone replaces it, creating waste in the process. There’s no danger of such a fate for the revamped bungalow. This embodiment of sustainable beauty not only offers jaw-dropping good looks, but also—literally—prevents waste, producing nearly as much energy as it consumes—no small feat!

Consider that on the Home Energy Rating System (HERS) Index—the industry-standard measurement for residential energy efficiency—new construction typically earns a score of 100. The Beach House, impressively, boasts a score of 30. (On the HERS scale, lower scores are better, with 0 signifying energy self-sufficiency). In recognition of its achievement in efficiency, the project garnered a number of coveted designations, including both Energy Star and LEED Platinum certification. In addition, Green Builder chose The Beach House as its “Green Home of the Year” in 2015.

It’s easy to see why. In designing this home that fuses rustic authenticity with contemporary style, Côté relied on a wide and diverse array of salvaged, locally sourced building materials to shrink the total carbon footprint of the building. Much of the wood used in the renovation came from a dilapidated barn nearby, while the fir floorboards formerly served as framing joists in a big-city factory. The emphasis on the reuse of resources percolates down into the countless smaller details that give the home character—for example, the antique ship’s lantern used as a bathroom pendant light.

The Beach House also conserves resources on an ongoing basis, thanks to a suite of energy-conserving features that figure prominently in its design. The solar shingles on the roof are a case in point. Though manufactured to resemble traditional slate, each roofing shingle incorporates photovoltaic cells—the same kind you’d find in regular solar panels.

Equally important to the efficiency of The Beach House is its unique climate-control system. As cooling and heating account for more than half of total household energy consumption on average, the right equipment can make a big difference on the bottom line. In choosing a system for The Beach House, however, Côté couldn’t focus on efficiency alone. He also needed to contend with the fact that the house had never had ducts and would need to be modified to accommodate them. That, in turn, would limit the possibilities for the architecture and interior design of the home—not a welcome prospect.

Rather than recalibrate his creativity to meet the demands of a climate-control system, Côté instead sought a solution that would adapt to his preferred design. He opted for the same technology he had installed in his own house—the Unico System. In a class of its own, Unico trades full-size, rigid metal ductwork for small-diameter, flexible tubes that snake behind walls and between joists for an unobtrusive installation that requires no aesthetic compromise. Moreover, the air handler is a third the size of a traditional system but provides the same output; this saves valuable space.

On the energy efficiency side, Côté knew the Unico System would help achieve the performance he needed for the certifications. Remember that standard air ducts are infamously leaky, losing enough energy to hinder overall efficiency by 25 percent or more. By contrast, there’s next to no thermal loss with the Unico System, as its ducts are insulated to minimize leakage, maximize efficiency, and ensure that the homeowner pays no more than strictly necessary to maintain a comfortable indoor environment. Further savings come in the summer when, using the system to cool the house, the owner can set the thermostat a few degrees higher than normal, thanks to the fact that, in comparison with its peers, Unico removes 30 percent more humidity.

As Michael Carlo of Innovative Air Solutions, the specialists who installed the HVAC system, notes, “This is a small house with limited wasted space; no other system would work here.” At the very least, Carlo continues, if a less versatile climate-control system had been chosen, The Beach House “wouldn’t have gotten done the way [it had been] envisioned.” Ultimately, the Unico System was “the obvious choice,” because the groundbreaking technology was uniquely well suited to support the two main goals of the ambitious project—excellence in design and boundary-pushing efficiency.

People often assume that in the course of renovating an existing home or constructing a brand-new one, it’s necessary to prioritize either aesthetics or performance; they believe that the two are not complementary, but rather mutually exclusive. That may have been true in the past, but as technology advances with each passing year, that conventional wisdom becomes more and more outdated. Today, homeowners enjoy a rich variety of options, from solar shingles to all-but-invisible cooling and heating, for making their homes as energy-smart as they are visually appealing.

9 Reasons to Bring Back the Wood Stove

12 Things Never to Put in Your Dishwasher

The Best Reusable Products You Can Snag from Amazon