The disk sander is a high-powered sanding tool. 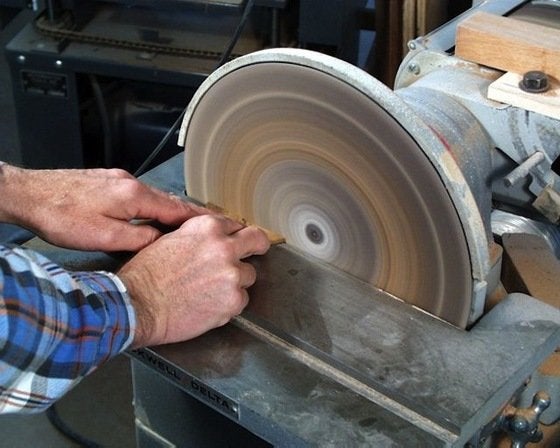 Sanding disks are prefabricated disks of abrasive paper. They can be mounted on a variety of tools, including the radial-arm saw, bench grinder, and electric drill. The tools I have in mind here are designed to function as sanders only, whether they are hand-held portable models or stationary models fixed on a stand or benchtop. Most sanding disks, however, are used in a similar way regardless of the tool to which they are attached.

A steel or aluminum backing plate supports the abrasive sanding disk. A motor drives the disk in a circular motion; a screw and washer at the center are recessed so as not to protrude into the work area of the sanding surface.

In the case of the benchtop disk sander, an adjustable worktable is fixed in front of the disk and is used to hold the workpiece during sanding. The worktable can be tilted for end cuts, and often has a slot in which a miter gauge slides for aligning miter-cut workpieces. Disk diameters typically range from as small as four inches up to eight inches, though disk sanders with capacities as great as twelve inches are common in commercial applications.

The circular motion of the stationary disk sander makes it most suit­able for smoothing end grain, or straight and miter cuts, as well as curved edges (if used with the grain, it will scratch the wood). The wood should contact the disk on a stationary sander on its downward path, so that the motion of the disk holds the stock to the worktable. Several light passes are preferable to one hard cut.

In the case of a portable sander, the workpiece is fixed in a vise or secured by bench dogs, and the sander brought to it. Also called an offset disk sander (because the disk spins on an axis perpendicular to the sander’s housing), this tool is best suited to face sanding. The tool should be held at a slight angle to the workpiece with approximately a third of the disk in contact with the surface to be smoothed. Keep the sander moving in order to avoid gouging the surface; don’t apply too much pressure, as this can make the sander burn or dig into the stock.

Stationary disk sanders are often sold as a combination tool with a belt sander. The belt sander is well suited to sanding with the grain, the disk sander to end grain, and the combination tool can be an economical (and space-saving) alternative to buying two separate sanders, offering the functions of two tools in the space of one.