I Tried the Popular Affresh Tablets to Clean My Smelly Washer—Do They Really Work? 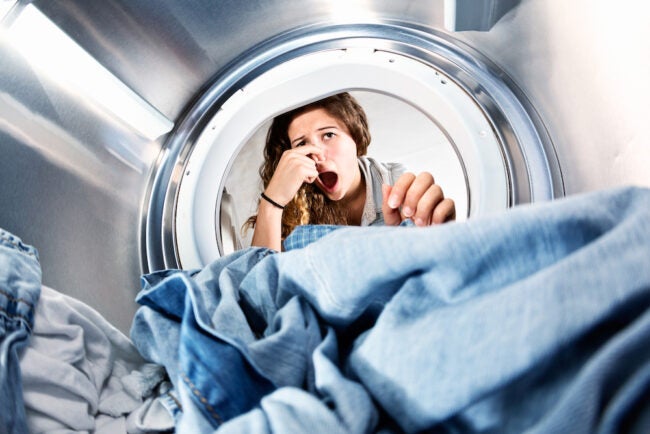 A stinky washing machine can quickly put a damper on laundry day. Besides leaving a lingering smell on clothing, an odor is a sign of residue or grime lurking in your washer. If you’ve scrubbed, soaped, and bleached to no avail, it’s time to try something new. To do away with unpleasant smells, upgrade from a DIY solution and use a specially formulated washing machine cleaner instead.

Affresh Washing Machine Cleaner is effective and couldn’t be simpler to use. One tablet is often enough to break up grime and banish smells in any front- or top-loading washing machine model.

What’s Behind the Cleaning Power?

Affresh Washing Machine Cleaner is commonly sold in pouches, with each pouch containing three to six cleaning tablets. The cleaner comes in tablet form, and each small, hard tablet is made of a condensed cleaning powder. The time-release tablets dissolve slowly during the cleaning cycle to remove odor-causing grime inside the drum and machine.

The main ingredients include sodium percarbonate (also known as oxygen bleach) and sodium carbonate, which work together to remove odorous residue, cut through grease and grime, and soften water and residue. The ingredients are septic safe and won’t harm washing machine components. Each tablet has a mild, slightly citrusy detergent smell that is not too strong.

While the tablets are EPA (Environmental Protection Agency) Safer Choice Certified, Affresh recommends against getting the cleaner in your eyes or on your skin. But this certification is still a great feature: It means the tablets use safer chemical ingredients. EPA Safer Choice certification gives peace of mind that washing the product down the drain is less harmful to people, pets, and the environment.

Is Affresh Washing Machine Cleaner Easy to Use?

Affresh Washing Machine Cleaner is safe to use in all washing machine types, including front-loading, top-loading, and HE (High Efficiency) washers. I found that the tablets really couldn’t be simpler to use—I simply opened the washing machine, dropped one tablet into the drum, and started the cycle. Just make sure there’s no laundry left in the machine. These tablets work best on their own; they won’t clean or remove stains from clothes.

I found that one of the main benefits of using a cleaning tablet is that it can tackle the spots you can’t reach. The tablet will dissolve into a cleansing foam and do the scrubbing for you. This washing machine cleaner also eliminates unpleasant smells by ridding the washer of gunk like detergent residue, body oils, and mildew.

Affresh recommends hot water for the most effective clean. Hot water helps the tablet break down and reach the nooks and crannies within the washing machine drum. I ran the tablet through a preset “clean washer” cycle but you can also use a normal or heavy-duty cycle if a cleaning cycle isn’t available.

An as-needed fourth step is to remove any dislodged dirt or grime from the machine drum after the cleaning cycle. A wipe of the washing machine drum should do the trick in most cases. This process may be unpleasant since some washing machine cleaners are completely residue-free. But, I found it a bit satisfying as it showed an undeniable sign that the cleaner dislodged some lurking grime.

Overall, the tablets performed as promised, leaving the washing machine clean with no malodors left behind.

The tablets are simple—even pleasant—to use. By breaking down and washing away residue in the machine, these tablets also rinse away musty smells. Out of the package, the tablets smell fresh, but the scent dissipates quickly during the wash cycle. Unlike bleach or vinegar, they don’t have an overly strong scent, which means no bleach or vinegar stench is filling up the laundry room. After the cycle, there are no cloying fragrances left behind—just a neutral, clean smell.

As mentioned, Affresh recommends wiping the machine if any dislodged grime or residue is left behind. Ideally, most of the grime will wash away. In my test, there was no leftover residue—just a spotless drum.

Also, keep in mind that the product will only clean the spots that the water will reach, which means I did have to clean some sealings and gaskets manually. This extra cleaning step is especially important for front-loading machines, where grime and mildew in the door gaskets can put up quite a stink.

Is Affresh Washing Machine Cleaner Worth the Cost?

Per unit, Affresh tablets are more expensive than budget washing machine cleaners and other common cleaning alternatives like bleach or vinegar. They’re also a one-trick pony, as they will only clean the washing machine and not other areas of the home.

Each pouch includes between three and six tablets. At $2-3 per tablet, Affresh Washing Machine Cleaner is still a cost-friendly product. The slightly higher price pays for the specially formulated ingredients list and pre-measured convenience. Using a specifically formulated product comes with some benefits. A product like Affresh has been tested and tweaked to its most effective dose for cleaning a washing machine, unlike regular household bleach. Many reviewers, ourselves included, find it more effective than bleach for cutting through musty washer smells. And it is safer to use than vinegar, which may cause damage to the washing machine with frequent use.

Affresh recommends using a tablet once a month, or every 30 washes, so you can likely maintain your machine’s cleanliness for under $40 a year—even less if you stock up on the tablets when they’re on sale.

Is Affresh Washing Machine Cleaner Right For You?

Affresh Washing Machine Cleaner is an excellent pick for tackling stubborn dirt, grime, and odors in all models of washing machines. The specially formulated ingredients can provide better residue-busting power to clean away gunk that other cleaners don’t touch.

One of this cleaner’s strongest features is the odor-busting power, which it accomplishes by breaking down and removing residue rather than killing bacteria as bleach does. As mentioned above, Affresh Washing Machine Cleaner doesn’t boast any specific sanitizing power. These tablets are better suited for removing residue rather than disinfecting a washing machine. They also cost more per load than household bleach but are a great option if DIY methods aren’t doing the trick. At a few dollars per clean, these tablets are still an affordable option, especially since most users can go a month or more between uses.

With a light, fresh fragrance, the Affresh Washing Machine Cleaner also has a less overpowering scent than bleach or other harsh cleaners. The smell doesn’t linger past the initial wash, which is a problem users face with some other washing machine cleaners. Its light scent makes this cleaner a suitable pick for those who prefer less (but still some) fragrance.

Overall, Affresh Washing Machine Cleaner is an affordable pick for those looking for a specially formulated cleaning product. While these tablets cost more than some other household soaps or bleach, the price reflects an effective formula in an easy-to-use format. Each convenient tablet takes the effort out of cleaning residue and malodors for a fresher, cleaner washing machine.

How to Clean a Washing Machine

How to Make Any Room Into a Laundry Room

10 Things You Can (and Should) Buy Used on Amazon