This pretty and functional succulent is perfect for beginners because it can tolerate the occasional forgotten watering. 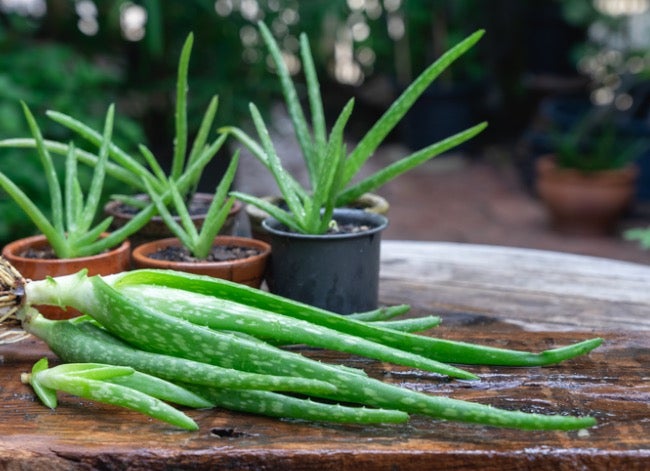 Aloe barbadensis miller, better known simply as aloe or aloe vera, is a succulent that originated in the Arabian peninsula and now appears as more than 500 species around the world. In fact, it propagates so easily that it’s even considered an invasive species in some regions.

Aloe vera is known for its medicinal properties, having been used to treat burns, injuries, and sunburns for generations. Due to its purported skin-care benefits, you’ll find aloe gel in moisturizers, shaving cream, soap, shampoo, and facial tissues. The gel derived from the aloe vera plant is also taken as a dietary supplement and is found in commercially produced food and beverages.

Read on for everything you need to know about aloe vera plant care, including its soil, light, water, and temperature needs.

In the U.S., aloe vera (Aloe barbadensis miller) acts as an evergreen perennial in USDA hardiness zones 8 through 11, but in the rest of the country can be grown as an indoor houseplant. In the wild, it grows to heights of between 24 and 39 inches with fleshy, serrated leaves that range in color from greenish-gray to bright green.

Aloe grows quickly, reaching its mature size after just 3 or 4 years. It flowers during its growing season—which typically takes place in the summer—with red, yellow, or orange blooms. Don’t be disappointed if your aloe houseplant doesn’t flower; it might take several years to do so.

When grown in a pot, aloe does best with well-draining, sandy soil. Plant it in a terra-cotta pot with a drainage hole to offer optimal drainage for the best results. Choose a cacti and succulent potting mix because it provides ideal drainage for aloe. Alternatively, consider mixing your own soil by adding perlite or coarse sand to your existing potting mixture. One reason aloe is perfect for beginners is that it actually likes a snug space and doesn’t need to be repotted unless its heavy leaves are causing it to tip over. Choosing a heavy pot will prevent tipping. If you do repot your aloe plant, wait at least a week before watering it to prevent root rot.

Related: 8 Plants You Can Grow Without Soil

Like many other succulents, aloe vera does best when it receives indirect sunlight. Western and southern exposures are considered to be ideal for aloe plants. The more sunlight it receives, the more likely an aloe vera plant grown indoors will flower.

If an aloe vera plant doesn’t get enough sun, it will cease its growth cycle and go dormant, believing it’s winter, so be sure it gets plenty of sun. If your aloe plant’s leaves begin to take on a reddish hue, however, it’s actually a sign of sunburn and means your plant is getting too much direct sunlight.

If you often forget to water your houseplants, you’re in luck, because aloe grows naturally in low-moisture areas and is quite drought tolerant. That means you can skip the occasional watering without any adverse effects. Generally speaking, aloe should be watered every 2 weeks during the growing season. Allow the soil to dry completely before watering again.

When it’s dormant in the winter, aloe vera can go weeks without needing water. If the leaves start to shrivel, however, you’ll know your plant needs more water. Be wary of overwatering, as it can cause root rot. Leaves becoming limp is a classic signal that you’re overwatering. While the plant can potentially recover from either over-or under-watering, there’s a risk that the existing leaves will die.

Aloe vera doesn’t need particularly fertile soil, so fertilizing annually should be sufficient. It’s best to fertilize in the spring before the growing season begins. When fertilizing, use a standard houseplant fertilizer and dilute it to half strength.

The ideal growing environment for an aloe plant is between 55 and 85 degrees Fahrenheit, offering a wide temperature range for either indoor or outdoor growth. Aloe can handle temperatures as low as 40 degrees. While it’s safe to bring your aloe plant outdoors during the warm summer months, be sure to bring it back inside before the first frost.

Propagating aloe vera plants is easy because the mother plant typically produces offshoots—also known as “pups.” To propagate your plant, simply separate one of these offshoots from the main plant, making sure to extract its root system along with the leaves. Alternatively, you can replant aloe vera’s leaf tips after cutting off the top 3 inches of a leaf with a clean, sharp knife.

Prune the outer leaves of your aloe vera plant when they begin to turn brown at the edges.

Despite the fact that aloe vera gel is used in consumable products, it can actually be toxic when ingested in high quantities. The California Office of Environmental Health Hazard Assessment deemed non-decolorized aloe vera leaf extract to be potentially carcinogenic when consumed orally. While the amounts found in commercially made food and beverages are safe to consume, exercise caution when extracting and consuming aloe gel yourself.

Aloe also can have potential negative interactions with some prescription drugs, including those meant to treat diabetes, heart disease, and blood clots. Aloe is toxic to pets and can cause adverse skin reactions in some people.

Aloe is generally resistant to pests, but it might still become infected with aphids, spider mites, scale insects, or mealybugs. Remove these pests manually by picking them off the leaves or rinsing the plant with water. Alternatively, use a natural insecticide like neem oil to keep them at bay.

Since it’s used to growing in arid conditions, aloe vera is particularly susceptible to root rot, soft rot, fungal stem rot, and leaf rot. Prevent aloe vera plant care problems like these by avoiding overwatering and waiting until the soil is dry before giving your plant more water.

Related: The Best Pots for Aloe Plants to Thrive Indoors

While you’ve learned more about care of the aloe vera plant, you still might have some questions about its maintenance needs. Here are some common questions and their answers.

Q. How do you take care of an aloe vera plant?

Take care of your aloe plant by placing it in indirect sunlight and watering it every 2 weeks during the summer and monthly during the winter.

Q. Is aloe vera an indoor or outdoor plant?

Aloe vera can grow outdoors in certain warm climates, but it is grown indoors around the world.

Q. How often should aloe be watered?

During the growing season, aloe should be watered every 2 weeks, while in the dormant season it can go a month or more without water.

Q. What does an overwatered aloe plant look like?

If your aloe plant’s leaves are drooping or turning brown, you might be overwatering it.

How To: Propagate Succulents
Advertisement

The Best Pots for Aloe Plants in 2022

How to Grow Agave