Tim Allen is back on TV—and Home Improvement fans will get a kick out of his new show. 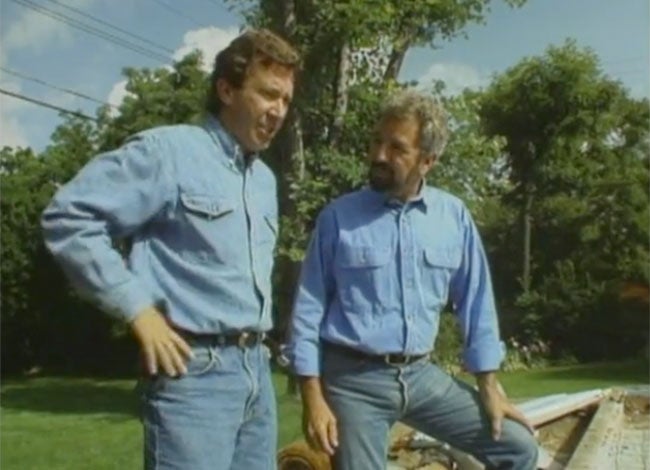 Fans hoping for a reboot of the ’90s hit sitcom Home Improvement may be disappointed to learn that Tim Allen and his longtime sidekick, Richard Karn, won’t be reprising their roles in the long-running show. Rather, they have thrown their hardhats into the reality-TV ring, spearheading a competition-style show that puts weekend tinkerers and keen power-tool users to the DIY test.

Each episode of the History Channel’s Assembly Required begins with three contestants tackling a mystery build, using supplies shipped right to their personal workspaces. The remote approach not only neatly sidesteps Covid-related concerns, but also allows viewers a peek into shops, garages, and man caves across the country.

After the initial builds are appraised in this elimination round, only two makers advance. They’re then tasked with transforming would-be trash into a unique and useful treasure—and they have only 5 days to do it.

Assembly Required uses Tool Time callback jokes and the cohosts’ camaraderie to serve up ’90s nostalgia, but the show also reflects today’s modern, Millennial-centric culture. That’s no surprise, given the cohort’s enthusiasm for all things upcycled, repurposed, homespun, and handcrafted.

To temper some of the show’s testosterone, executive producer Mary Donahue turned to the YouTube community, tapping maker April Wilkerson as Assembly Required’s resident expert. With 1.35 million subscribers and several sponsors, Wilkerson is a rising star in her own right. She offers tool-themed tips and tricks on the show and also sneakily sabotages an important item in each crate of supplies delivered to the finalists, forcing them to diagnose and fix the problem before they can complete their builds.

It’s no secret that Home Improvement was conceived as a parody of This Old House, even as the fictional Tool Time paid genuine homage to its groundbreaking PBS predecessor. Yet Allen and Karn’s appreciation for clever, inventive craftsmanship lends authenticity to their new project. And while both franchises have evolved over the 30-odd years since Allen last uttered his catchphrase (“More Power!”), one element has remained the same: this tool-toting duo’s high regard for the OG TV handyman himself, Bob Vila.

Vila visited the Tool Time set on several occasions during Home Improvement’s 8-year run, each appearance adding fuel to a fictional feud. The two home-repair household names faced off first in a trivia contest, and then in some unorthodox races, one involving hot rods, another using souped-up lawn mowers. Allen later returned the favor, making a cameo appearance on the long-running, award-winning Bob Vila’s Home Again.

So it’s not surprising that when Assembly Required debuted, Vila’s viewers and Allen’s admirers alike wondered how long it might be before the new program threw it back to Tim “The Tool Man” Taylor’s nemesis. This time around, it is Karn who invokes the three-syllable name that’s synonymous with home repair.

No more spoilers—you’ll have to watch the show to find out how the rival renovators’ paths cross once more. Watch full episodes of Assembly Required, meet the makers, and check out exclusive extras on History or Discovery+.

The 11 Most Expensive Appliance Parts to Replace

Tim Allen and Richard Karn’s Show is Back With a New Name—and Hom...
Advertisement