Figure out why a window mysteriously fogged up, and how to clear things up again. 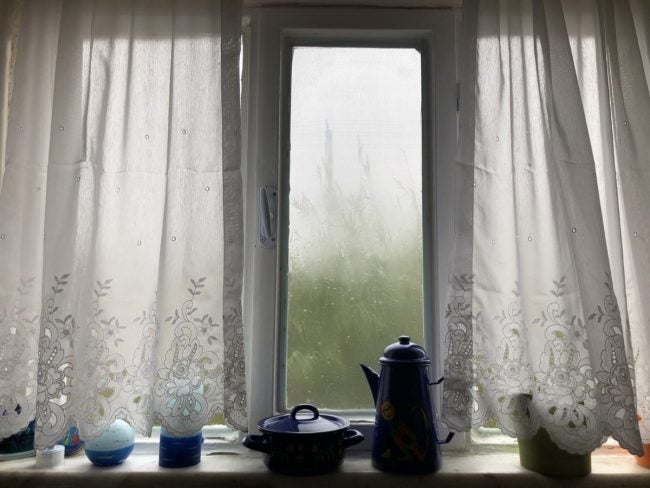 Q: Until last week, I could look out my kitchen window to watch the songbirds at my backyard feeder. But something must have happened to the window because now the inside of the double panes is foggy—like a steamy mirror after a shower—obstructing my view. I tried wiping both the inside and the outside of the window, but no luck. What can I do to make my window clear again?

A: Your window woe is likely the result of a broken window seal. Unlike the single-pane windows of the past, today’s windows feature two or three glass panes separated by air space that are then sealed entirely around the edges with a rubbery elastic sealant to keep humidity out. Officially known as an insulated glass unit (IGU), these types of windows are also called a double-pane, multipane, or thermopane. The layer of air between panes may also contain an inert gas, such as argon or krypton, to further reduce the transfer of outdoor heat or cold through the window.

Visible condensation is the most common sign of a broken window seal.

When a window seal fails, humid air can seep between the panes and create the fog you’re seeing. If you do nothing, the fog may lessen or worsen in conjunction with weather changes and fluctuating outdoor humidity levels. Now that the seal is broken, however, the problem will persist, and if the window contained an inert gas, its enhanced insulating factor is now gone. Keep reading to learn why windows seals fail, what your repair options are, and what you can do to reduce the risk of seals failing in other windows.

Distortion of the glass is also a sign that the seal has failed.

On IGUs that are filled with inert gas, when a seal fails and the gas leaks out, the panes may collapse inward slightly, or even crack. If items outside the window look unusually distorted, even if no condensation is present between the panes, it’s probably a sign that a window seal has failed.

Windows that receive a lot of sunshine are at increased risk of seal failure.

As the hot sun shines on a window, the glass expands and puts pressure on the seal. Overnight, the glass cools once again and contracts. This process is known as “solar pumping,” and over time, the repeated expansion and contraction (along with hardening of the seal material) can cause a seal to fail. Because of this, seals in windows that receive the most sunshine—on the west and south sides of a home—often fail before windows on the east and north sides of a house.

Window seals can fail for other reasons.

Anything that damages the sealant material can cause the seal to fail. This includes, but isn’t limited to:

The best way to ensure a clear view is to replace the IGU.

This should usually be done by a contractor who understands how the window comes apart. The sash (the frame that holds the panes) is removed and is then disassembled in order to take the IGU out. A new replacement IGU (ordered from the window manufacturer) is then fitted into the sash, and the sash is reassembled and put back in the window. If the manufacturer of the window is unknown, the IGU can be removed and taken to a glass fabricator who will make a replacement IGU. The second option entails boarding-up the window until the replacement is ready. The cost of a replacement IGU can run anywhere from $100 to $600, or more, depending on the size and quality of the window, and labor charges can add an additional $150 to $500.

If the window is under warranty, call the manufacturer to fix a broken window seal.

Depending on the quality of the window, it may be guaranteed for anywhere from three to 15 years, and if the seal fails within that time, the manufacturer will often provide a new IGU. Some manufacturers have their own technicians who will come to the home and replace the IGU, while others will send a new IGU, and then the homeowner is on the hook for paying a contractor for his labor. The caveat here is that the warranty will only cover the IGU if the seal was faulty. If a tech comes out and determines the seal failed for any other reason, the warranty is void.

Having the window defogged may be an option.

Some window repair companies offer defogging services for windows with failed seals. Defogging involves drilling a small hole in the exterior of the glass pane, injecting a chemical between the panes to dry up the condensation, and then attaching a vacuum to the hole and removing as much air as possible before sealing the hole. This is a temporary fix, and there’s no guarantee the window won’t quickly fog again because the seal is still broken. This service runs about $60 to $100.

If the window is old, consider an entire window replacement.

RELATED: 3 Things to Look for in Replacement Windows

Any insulated window will benefit from a little care. The following common-sense tips will help the seals in your windows last longer.

TAGS:
HOW TO
REPAIR
WINDOWS
More From Bob Vila

14 Types of Windows Every Homeowner Should Know
Advertisement

8 Cleaning Products That Won't Have You Lifting a Finger

These Curb Appeal Makeovers All Share 1 Thing in Common

9 Space-Smart Ways to Fit Two Rooms in One