This Calathea Care Routine Will Challenge Your Green Thumb

Considered fussy by some, this gorgeous houseplant thrives with the right soil and care—and it’s not all that difficult to create an optimal environment. 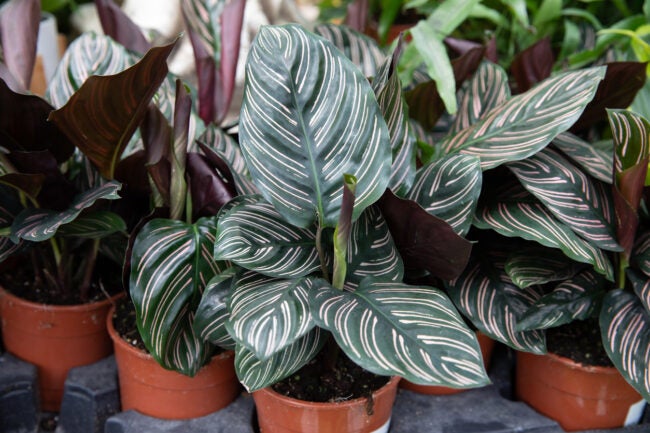 Featuring some of the most colorful and striking plants to be found, the calathea family comprises more than 300 cultivars, dozens of which are highly sought after as houseplants. Many types of calathea boast bold, contrasting leaf veining that draws the eye and creates a natural focal point in the room.

While a healthy calathea is stunning, it can be challenging to grow unless it receives the same amount of light, water, and nutrients it would enjoy in its natural habitat. However, once you establish a suitable environment, calatheas will thrive. Ahead, learn about all the little quirks of calathea and find out how to successfully grow this beautiful houseplant.

Related: It’s Not Me, It’s You: The 10 Toughest Houseplants to Keep Alive

Calathea Care at a Glance

Most calathea varieties are relatively small, ranging in mature height from just 6 inches up to 2 feet, so this species is especially well suited to indoor growing in rooms where space is limited. Calathea plants are native to Brazil, where they grow in a tropical environment under a canopy of lush trees that block direct sunlight. Calathea is sometimes called the “prayer plant” because it draws its leaves upward at night—an unusual natural process called nyctinasty.

Known by growers as a “greenhouse plant,” the calathea plant requires an environment that mimics its natural tropical habitat. Fortunately, you don’t have to own a greenhouse to create a growing environment conducive to this houseplant. By using suitable potting soil, selecting an optimal spot for the plant, and following regular watering and fertilizing schedules, you might find that calathea is easier to grow than you thought.

While some calatheas bloom in their natural habitat, they’re not considered flowering plants when kept as houseplants, so don’t expect blossoms.

Among the most exotic of all houseplants, calathea is sought out for its bright contrasting colors and spectacular leaf designs, which vary widely by species. The following types of calathea are among the most popular—and for collectors of the species—the easiest to find in garden centers.

For calathea to thrive, it needs to grow in a loamy soil mix that drains well yet remains damp. Consider a commercial potting mix containing coconut coir or charcoal; both allow water to run through yet absorb enough to stay moist so calathea roots won’t dry out. A suitable mix, such as Miracle-Gro’s Indoor Potting Mix (available on Amazon), will provide a light, well-draining soil.

When potting calathea, consider using a plastic pot or a glazed ceramic pot rather than an unglazed clay or terra-cotta pot. The unglazed types can wick moisture out of the soil, leaving it too dry for calathea’s tastes.

Related: These Will Be the Trendiest Houseplants of 2021, According to an Indoor Gardening Guru

In its natural habitat, calathea grows on the subtropical jungle floor where the sun never shines. In the home, calathea will do best when placed in a spot where it receives indirect light, such as near a north-facing window or even across the room from a window—in lower light—just as long as it does not receive direct sunlight at any time.

Direct sun rays will burn calathea leaves, causing them to curl, turn brown, and fall off. It can even kill the plant. The types of calathea that feature rose or purple coloring will benefit from medium indirect light rather than deep shade to fully develop their bold color.

A precise watering schedule is vital to growing calathea successfully. This is the one area where—if things are going to go wrong—they likely will. Calathea roots like moist soil, which means the plant must receive water frequently enough to keep the soil at root level moist. But, they don’t like sitting in water so, as previously mentioned, the soil must drain well. Always plant calathea in a pot with drainage holes.

Start by watering the plant thoroughly until the water stops draining out the bottom (setting it in a sink for this step is optimal). Then, place the calathea in its location and check the soil in two days, then every day after. When you poke a finger 2 inches deep in the soil, it should come out wet, but the soil should not feel soggy.

If the soil is only damp—think how laundry feels when you take it out of the washer—the plant needs water now. Calathea watering frequency will depend on the size of the plant and the size of the pot, and once you establish a routine, such as every two or three days, stick to it.

Another concern with watering calathea is that tap water might contain too many minerals or contaminants that can stunt the plant’s growth. If possible, use only distilled water.

Subtropical calathea will benefit from monthly feedings during its growth seasons of spring and summer, but don’t fertilize more frequently. Follow the application instructions on the package carefully.

A balanced indoor plant fertilizer with a 10-10-10 NPK ratio (nitrogen, phosphorus, potassium) is well-suited for keeping calathea healthy. During fall and winter, reduce fertilizing to once every three months. To avoid over fertilizing, consider keeping a log of each time you feed the plant. A commercial fertilizer, such as Bonide’s Liquid Plant Food (available from Amazon), works well for fertilizing most types of calathea.

Humidity is a different story. Calathea likes a humid environment, so air that’s too dry is a major factor in calathea failure. You can mist the plant with a light spray of water once or twice a day or run a humidifier in the room. Alternatively, try growing calathea in a large terrarium, such as the H Potter Glass Terrarium (available from Amazon), which provides uniform high humidity. A third humidity option could be to grow your calathea in a fairly humid room, such as a bathroom. Steamy showers will add the humidity this plant loves.

Calathea is one of few houseplants that cannot be propagated by taking cuttings and rooting them in water. Instead, it can be reproduced by division. The best time to try propagating a new calathea plant is when you’re transplanting a mature plant to a larger pot. Here’s how to do it:

One thing that makes calathea so popular is that these plants are nontoxic to humans and animals, including dogs, cats, and horses. This makes them well-suited green choices for homes with small children and pets. The plants are listed in many roundups as being kid- and pet-friendly.

Fortunately, calathea is typically pest-free and isn’t highly susceptible to any particular type of insect infestation. That doesn’t mean it won’t play host to insects already in the home, such as gnats, mites, or whiteflies. You can remedy most pest problems quickly by applying a natural pesticide such as neem oil.

Calathea is more likely to develop a fungal disease from over-watering, appearing as spots on the leaves. Treat fungus promptly by spraying a fungicide that’s suitable for use on houseplants, such as Garden Safe Fungicide 3 (available from Amazon). If fungus occurs repeatedly, it might be time to repot the plant with a better-draining soil mix or reduce watering frequency.

While calathea is not an easy-keeper, many plant parents grow it with great success by following a few strict requirements. Calathea plants are so striking that most find they’re worth establishing the perfect environment. Those who are new to growing this subtropical beauty will likely have a few questions.

Q: How can I save a dying calathea plant?

If over-watering has led to root rot, it might not be possible to save the plant. If calathea is drooping or wilted due to under-watering, however, repotting it in a well-draining soil and following a regular watering routine might revive it.

Calatheas love humidity! Run a humidifier in the room, plant in a terrarium, or mist the plant frequently to provide the humidity it needs.

Q: Do calatheas need a lot of light?

Only indirect light. Optimal calathea light requirements include avoiding placement in a sunny window or anywhere else direct sun rays can fall on the plant. Choose a spot near a north-facing window or even in the center of a room.

Q. Can I grow calathea in water?

No. Calathea does not like “wet feet,” and its roots will rot in standing water. Likewise, calathea cannot be propagated by taking cuttings and putting them in water.

Q. Can I trim calathea leaves?

Sure. Occasionally, the tips of calathea leaves might develop a slight crisping, but there’s no need to remove the entire leaf. With a sharp pair of scissors, trim off just the browned edges, and the leaf will look like new.

This Peace Lily Care Routine Is so Low Maintenance, You Don’t Nee...