What is a Cesspool, and Should I Buy a House That has One?

Before deciding on a house with a cesspool, it’s important to understand exactly how this system works and the costs associated with it. 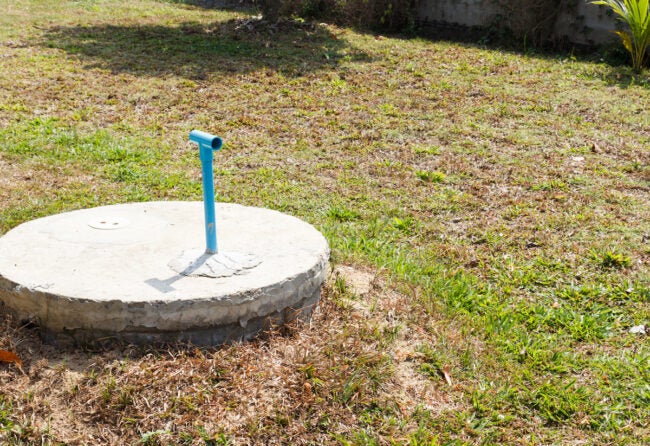 Q: My wife and I are looking at homes, and have come across a few in our area that have cesspools instead of municipal sewage systems or septic systems. What is a cesspool and is it advised to buy a house that has one?

A: House-hunting can get complicated in a hurry when potential houses have unfamiliar home systems, like a cesspool. This septic system alternative typically consists of a brick or concrete chamber that is used to collect and store wastewater from the home. However, a cesspool does not filter wastewater to a drainage field, so it needs to be pumped about every six weeks to ensure the containment chamber doesn’t overflow and back up into the home plumbing. With this in mind, it is perfectly fine to purchase a home with a cesspool, just be aware that this type of system comes with higher maintenance costs than either a municipal sewer system or a septic system to keep it operating effectively.

A cesspool collects all of your effluent and wastewater and holds it.

Cesspools or cesspits are not intended to treat waste or wastewater from the home. These buried enclosures simply serve as a nearby storage location where the waste and wastewater are collected until a professional cesspool or septic pumping company can pump out the pit. The cesspool is essentially a sealed pit made of brick or concrete that is buried under the ground with a manhole for access.

Toilets, showers, tubs, sinks, washers, and dishwashers drain into the cesspool, where the waste, shampoo, grease, and cleaning solutions mix and create potentially hazardous gases, so it isn’t advised to open a cesspool without proper training and protection.

The main difference between a septic tank and a cesspool is that septic tanks treat liquid waste and filter it back into the ground.

Septic tanks and cesspools are intended to fulfill the same basic function, however, there are significant differences in the way these systems operate. Many people may be unsure about what a septic tank is, or how a cesspool works, so it’s necessary to take the time to understand the differences before buying a house with a septic tank or cesspool. A septic tank is designed to receive the waste from the home and break it down, separating it into heavy sludge which must be pumped out of the tank, effluent, and wastewater which is released into a leach field to improve the breakdown of the effluent material.

In contrast, a cesspool is a collection tank designed for the purpose of storing waste from the home without treating it. It essentially acts like the collection basin of an outhouse and must be regularly pumped to prevent overflow and sewage backup. Due to this frequent maintenance, septic tanks are a more popular option for treating and storing household waste.

A cesspool needs to be emptied regularly.

The frequency with which a cesspool or cesspit needs to be emptied depends on the size of the tank, the number of occupants, and the regularity of use. For instance, a cottage property may only be used during warm months, reducing the cesspool pumping frequency. A year-round residential property can have the same tank size and number of occupants, but due to the more regular use of the home, it will need to be pumped more frequently than the cesspool at the cottage.

If the cesspool is not regularly pumped it can overflow, leading to the sewage and waste backing up into the home through the pipes. So before this happens, it’s advised to contact a septic pumping company to regularly clean out the cesspool, at least every six weeks, for a residential property that is always occupied. However, each cesspool will differ in frequency and can range from once a month to once every three months. The collected waste is then pumped out and taken to a waste treatment plant, delivered to an independently operated sewage treatment company, or dumped in an approved landfill according to local, state, and federal laws.

Certain types of cesspools are banned in the U.S., and here’s why.

Related: The Best Toilet Paper for Septic Tanks in 2021

A cesspool’s size should be based on the number of people who live on the property.

The purpose of a cesspool or cesspit is to collect the waste and wastewater from the home, so in order to determine a suitable size for the cesspool, it’s necessary to consider the number of people that live on the property. Typically, a cesspit should have a capacity that sits below the level of the inlet pipe in order to prevent the waste from backing up the pipe.

The annual cost of emptying a cesspool can be prohibitive, which makes them generally poor solutions for permanent drainage.

Due to the frequency with which a cesspool needs to be pumped, the cost of maintaining these systems is often more than most people would want to pay. To put it in perspective, having a cesspool or septic system pumped out costs between $287 to $542. This means that while a septic system will cost an average of $95 to $180 per year to pump, a cesspool can cost between $2,300 to $4,335 per year in order to keep it working correctly. This high maintenance cost, coupled with the potential environmental impacts, is enough to encourage most people to switch to a municipal sewer system or a septic system.

Related: The Best Sewage Pumps for Your Septic System

Purchasing a property with a cesspool.

Before considering a property equipped with a cesspool system, it’s important to know about potential cesspool problems, as well as if a cesspool vs. septic tank is a better choice. Cesspools need to be emptied regularly, which can greatly increase your maintenance costs for the home. However, if they are not emptied, the waste can overflow and back up into the home. It can also leach into the surrounding soil, contaminating plants and groundwater sources.

With these potential risks at play, cesspools are not a good option to install on a property, but this doesn’t mean that you can’t invest in a property that already has a cesspool. These systems last about 40 years before needing to be replaced, at which point it’s advised to switch to a municipal sewage system or a septic system.

What Is a Barndominium? 10 Examples of This Spacious House Style

This is What No One Tells You About Downsizing