A study commissioned by LG Electronics found that more Americans prioritize cleaning their floors over all other surfaces in the home. 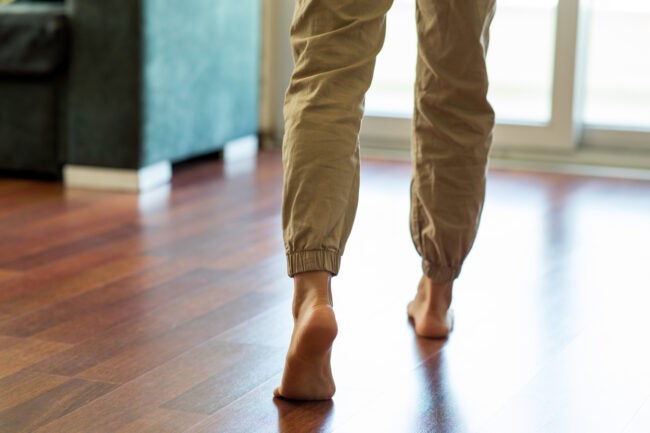 Cleaning is an unavoidable part of life, but homeowners differ when it comes to which housekeeping tasks they’re likely to tackle first. A study of 2,000 Americans commissioned by LG Electronics and conducted by OnePoll found that six in 10 people prioritize keeping their floors clean over any other surface in their homes.

Most pet owners in the study attributed their dirty floors to their furry family members, and 56 percent of respondents with children said that having little ones in the house made them more aware of how clean their floors are (or aren’t).

While floors might not seem like they’d be riddled with germs, certain areas are breeding grounds for bacteria, according to a study undertaken by the Hygiene Council. Flooring around the toilet and in front of the kitchen sink was found to have a quantity of bacteria: The kitchen floor was slightly dirtier, on average, with 830 bacteria per square inch. The space in front of the toilet had 764 bacteria per square inch. These spots were found to be dirtier than toilet seats, trash cans, kitchen counters, and bathroom door handles.

Despite harboring plenty of germs, LG’s study found that the floor is much cleaner than many other parts of the home, like the toilet bowl, which is home to about 3.2 million bacteria per square inch. The other germy spot is the kitchen drain, which has 567,845 bacteria per square inch. Microbiologist Joan L. Slonczewski confirmed the data from the study, saying that the floor was often one of the dirtiest parts of the bathroom.

How Often Should You Clean?

According to Signature Maids, some households only need to clean their floors every 2 weeks, while others need to sweep and mop much more frequently. This depends largely on the amount of traffic in the house, how many people live there, whether they wear shoes inside, and how many pets they have.

The company recommends the “barefoot test” to check whether your floors are due for a cleaning: Walk from one end of the room to the other in bare feet. Check the soles of your feet at the end of the stroll to see if there’s dirt, dust, or pet hair stuck to them. If so, it’s probably time to pull out the vacuum or mop.

Start by removing any debris by sweeping or vacuuming, and then eliminate bacteria by mopping with a high-quality floor cleaner that’s appropriate for the type of flooring in your home. For best results, consider using two buckets of water: one for clean sudsy water and one for cleaning the mop as you work. Since the dirty mop water will be full of bacteria by the time you’re done mopping, be sure to dispose of it by flushing it down the toilet and wiping down the bowl.

In terms of when to clean, there’s also a general consensus on the best time of the week to get chores done. The LG study found that people preferred to clean on Saturday mornings to kick off the weekend, while respondents voted that the worst time to clean was on Sunday evenings and Monday mornings.

RELATED: The Best Floor Cleaners for the Home

8 Dirty Secrets Your Carpet May Be Keeping from You
Advertisement

7 Unusual Tricks for Your Cleanest Floors Ever

16 Amazing Homemade Sheds to Inspire Yours

20 Area Rugs You Can Actually Afford