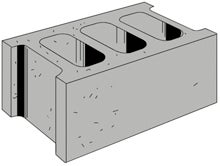 I know what you’re thinking—a concrete block. Big deal. But take a look at it. Solidly built. Produced with hollow centers to reduce weight, improve insulation, and, when filled, enhance stability. Made in various sizes and configurations to conform to specific construction requirements. When you consider its many different applications, you can begin to appreciate the appeal that this humble, inexpensive building block holds for builders, contractors, and DIYers the world over.

Strip away the bricks or stones covering your chimney and often you’ll discover concrete blocks. Move the earth away from your home’s foundation and, depending on when your house was built and whether or not it has a crawl space or basement, you are likely to find the same stalwart workhorse.

In addition to its more traditional uses, concrete blocks can also come in handy for more basic needs, like elevating a metal shelving unit in a basement that occasionally takes on water. I am hoping that my recent investment of $12 for four blocks will keep my storage high, dry and safe. Come spring, I am thinking of using similar blocks to create a retaining wall that will help slow the drainage that comes from the steeply pitched backyard, and the reason for some of the water that settles in the basement.

But perhaps there is a higher purpose for the lowly pre-cast concrete block, one that elevates it from foundation stone to artists’ medium. A case in point is this concrete block pyramid, titled “Tower (Columbus),” that rises in City Hall Park in Lower Manhattan. Conceived by Sol LeWitt (1928-2007), one of the father’s of conceptualism, the sculpture is one of several urban public art installations adorning city parks and public areas. While The New York Times review felt the work might have been more imposing in a gallery than dwarfed by the buildings that now engulf it, the installation—at least in my estimation—remains a proud, strong tribute to one heck of a block.

Should you Consider a Concrete House?

How to:  Build a Concrete Block Chimney

How To: Drill Into Concrete
Advertisement

10 Unusual Things You Can Do with Sugar

These Are the Most Expensive Zip Codes in Every State

7 Seriously Surprising Spots for a Fireplace

15 Fresh Takes on the Eat-In Kitchen

7 Tips to Keep Your Mower in Working Order