This DEWALT TSTAK Tool Organizer Is Affordable, But Does It Work?

To add tool storage to an existing system or contain a large collection of hand tools, this Dewalt Tool Box might fill the bill. It impressed our tough tester fairly well. 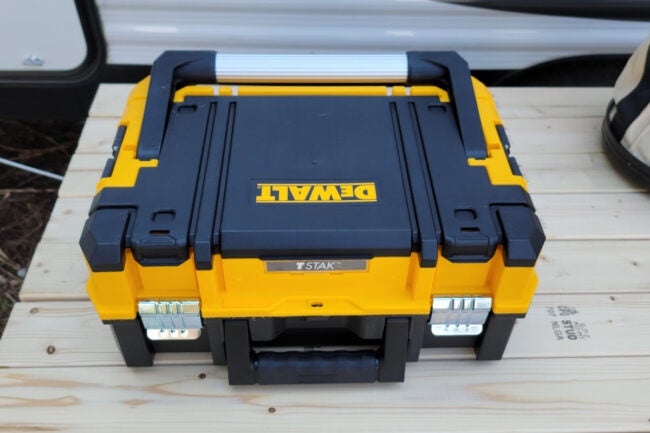 When it comes to tool storage, many DIYers may envision that red metal tool box that plumbers and handymen carried from job to job a generation ago. But tool storage has come quite a way since those metal tool boxes. There are now high-tech polymers, high-quality resins, and modular systems that users can build on.

But is new necessarily better? I got my hands on a Dewalt TSTAK tool box and put it through its paces. This modular box works with the brand’s TSTAK clamping system, which allows users to stack several boxes together for transport as one big unit. The model I tested is one of the smaller TSTAK boxes, which seemed applicable for the average DIYer’s tool kit.

I tested the storage, functionality, and durability of the box to gain a solid concept of its capabilities and specialties. Keep reading for my opinion on this tool box to help you decide if it’s the right buy for your needs.

Dewalt Tool Box At a Glance

Get the Dewalt TSTAK Tool Box at:

What is the Dewalt Tool Box?

The Dewalt Tool Box doesn’t look like most other tool boxes, so it might be a little off-putting at first. Instead of the classic lunch-pail design, this tool box features a more square footprint (though still rectangular, measuring 17.5 inches wide, 13 inches deep, and 7.5 inches tall). It has a hand tool storage area in the bottom, with a separate section on the lid for bits, fasteners, and other small parts. While it does have a small handle on one side, this model also has a massive handle that snaps into the vertical position and lays flat for storage.

The box is designed this way to be compatible with the Dewalt TSTAK system. This portable tool box system lets users clip or clamp boxes together via built-in brackets, allowing them to transport one unit comfortably, like a rolling tool box. They all feature this squarer footprint and snapping clips.

As far as materials, this box is primarily high-quality resin, which won’t dent or rust. There are two metal latches that snap into place, and the long handle consists of aluminum and resin for durability.

The Dewalt tool box’s main compartment is wide open, with no dividers, pockets, or other obstructions. Dewalt breaks up fastener and bit storage with small, molded, stationary dividers held in place under a plastic lid.

How easy was the Dewalt Tool Box to put together?

This question doesn’t really apply, since the Dewalt Tool Box was ready to go straight from the package. It’s a fairly simple, straightforward box without a lot of bells and whistles, and no little finicky pieces to mess around with.

The main section is wide open, without any dividers or small ridges to attach. The bit and fastener storage in the lid has small, molded dividers, but they don’t move. While that means you won’t be able to customize the storage setup, it does mean that this box is good to go from the jump.

I didn’t have a second TSTAK box to connect this one with, but the connection process is simple. Built-in latches at either end of the box flip out and snap into the box directly on top of them. So if someone bought two of these boxes, or wanted to add on to their existing TSTAK system with this one, it would be straightforward to set up.

Is the Dewalt Tool Box easy to use?

When I consider how easy the Dewalt tool box is to use, there are a few points that come to mind:

That said, one great usage of this tool box might be as a replacement for the standard tool box that comes with a cordless drill set. The box itself is large enough for a battery, charger, and drill, and the bit and fastener storage should keep those necessities organized.

Overall, the answer is a simple “yes.” Similar to the brand’s power tool boxes, which many tradespeople covet for their quality and durability, this box uses the same resin (as far as I can tell), the same latches, and a similar suitcase-style handle on the side. The addition of the long resin-and-aluminum top handle and the storage compartment in the lid are really the only real differences from Dewalt power tool boxes.

One issue did bother me, however. The lid that holds the fasteners/bits isn’t the same quality as the rest of the box. It snaps in place, but there’s no metal latch holding it there, so it could easily pop open if dropped or mishandled, sending small pieces everywhere. This potential bit-and-fastener nightmare is by far my least favorite part of the box.

Beyond that, the quality of the Dewalt tool box is outstanding. The aluminum handle is serious overkill, which is nice! The resin is as tough as I would expect from a Dewalt box, and the latches do a great job of keeping the main compartment shut.

Is the Dewalt Tool Box Worth the Money?

Using the links in this review, you can purchase this Dewalt Tool Box for less than $30. Without a doubt, the box is worth more than that.

In my opinion, the ideal use for this box is as a more organized replacement for the resin boxes that come with most Dewalt power tools. If you’re already invested in the system and buying tools sans battery, they don’t come with those boxes, which makes this tool box the perfect addition, and well worth the price.

But even if you’re just using it for tool storage, it’s still a great value. Other than the fastener lid, nothing on this box is flimsy. You can fill it with as many tools as it will hold, which is far more than just a standard set of hand tools. It’s compact enough to stand on its side in an apartment closet, but robust enough to handle heavy workshop use. It’s hard to say that about many other tool boxes at this price point.

Should You Buy a Dewalt Tool Box?

You might still be wondering if the Dewalt tool box is right for your needs. I can think of a few types of people for which this tool box is ideal:
If you already own some of the TSTAK boxes, this will be an excellent addition. It holds plenty of hand tools and can also organize some of the smaller power tools, batteries, and chargers.

If you fit any of those categories, you should seriously consider the Dewalt Tool Box. It’s durable, offers plenty of storage for a standard set of hand tools, and it’s modular, so you can add it onto a kit, or buy two and snap them together.

However, if you need to bring a lot of tools back and forth from the jobsite to the truck, and you’re not interested in a modular system, a rolling tool bag might be a better fit.

Where to Buy the Dewalt Tool Box

Get the Dewalt TSTAK Tool Box at:

Find an Amazing Deal on Brand-Name Tools? They Might Be Fake

The Best Rolling Tool Boxes of 2022

The Best Portable Tool Boxes of 2022