Trying to get a blaze going in your fireplace? Crumpled newspaper won't cut it. Instead, use materials that are otherwise destined for the dust bin to make a DIY fire starter. 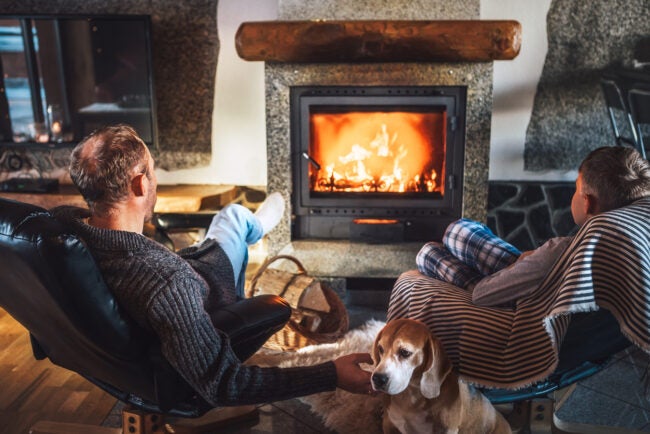 If you love your fireplace and spending time in front of a cheery, crackling flame, you’re no doubt familiar with fire starters like Duraflame and fatwood. These treated wood pieces facilitate the burning of firewood, helping to get the show on the road more quickly. Neither type is cheap, though, and you may not always have one readily at hand. Learning how to make a DIY fire starter using common household items will cut household costs, and ensure that you can always get those home fires burning in a flash. Here are  some clever, inexpensive ways to make your own fire starters.

The easiest DIY fire starter to make involves two things that are pretty easy to find in American homes: dryer lint and a cardboard toilet paper roll. Whenever you clean the lint trap in your dryer (which should be after each use, by the way), set the fuzzy fibers aside until you have enough fluff to stuff a cardboard roll end to end. For best results, use two or three lint-stuffed rolls to start your next fire. Pro tip: The lint won’t burn properly if it’s packed too tightly. Be sure to leave enough room for air to circulate through.

Looking for a fun, practical use for all those fallen pine cones in the yard? Try making all-natural fire starters. By dipping the pine cones in beeswax, you can make fire starters that are both attractive and effective for getting wood fires burning. You’ll need the following ingredients and supplies:

Here’s how to do it:

Variations: To color the pine cones, try adding a bit of grated crayon to the beeswax as you’re melting it. You can also stir a few drops of essential oil into the melted wax to give the pine cones a welcoming scent, such as cinnamon or pine needle.

Handy for a slew of household needs, cotton balls are a staple in most medicine cabinets. They’re also highly flammable, especially when they’re soaked in petroleum jelly. To make this DIY fire starter, simply roll a bunch of cotton balls in Vaseline until they are saturated in the jelly. Once they’re nice and sticky, store the balls in a resealable plastic bag until you need them. Tossing three or four into the hearth at a time should get your fire going. If you don’t have any cotton balls, try using Vaseline-covered cotton swabs or rounds.

The cool thing about this DIY fire starter idea is that it yields a bunch of fire starters that are compact enough to transport easily. Here’s how to make them:

File this under “who knew?”: In a pinch, a ball of duct tape makes a serviceable fire starter. Duct tape is flammable, particularly when it’s crumpled into a loose ball. To really get your fire going, wrap duct tape around a crumpled sheet of newspaper, or spritz the duct tape with a generous dollop of alcohol-based hand sanitizer.