Copper is used in all kinds of things from pans to ornaments to electrical connections, and one of its big advantages is that it doesn’t rust…or does it? 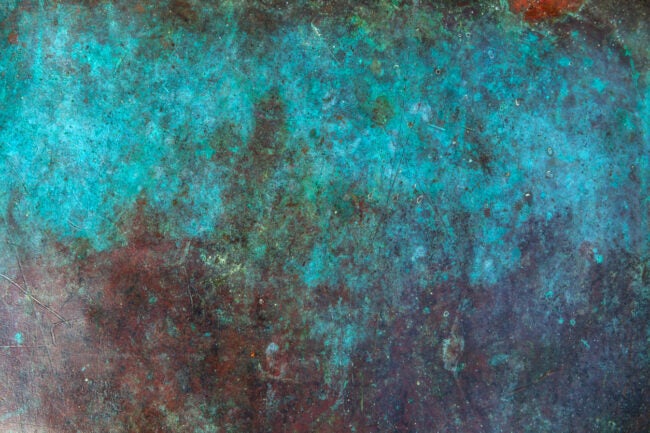 Q: I have a pair of heron garden ornaments made of copper that are showing greenish blue patches. I had thought they would be OK outdoors all year. Does copper rust and, if it does, how do I prevent it?

A: This is actually a fascinating question, and the answer is more involved than you might think.

So the core question is does copper rust, and the answer is a slightly confusing yes and no. It really depends on what you think of as ‘rust,’ and we’ll look at that in more detail below.

The second question is whether it can be prevented. The answer to that is definitely yes, but once you have had the chance to read through this short article you may not want to prevent it.

RELATED: 6 Things to Know Before You Paint Over Rust

Copper is a nonferrous metal.

Metals are broadly divided into two types. Ferrous metals are those that contain iron. For example all kinds of steel. These are known as alloys because they are combinations of one or more different elements. In the case of steel, those elements are iron and carbon, though other elements might be added to change the alloy’s characteristics.

Nonferrous metals do not contain iron, including aluminum, copper, and lead. These also are known as base metals, because they are a single element (they all appear on the periodic table). They also might be used in alloys for a variety of purposes.

The main problem with ferrous metals is that moisture in the air causes a chemical reaction with them, which looks like it’s eating into the metal’s surface. This process is called oxidation, or more commonly referred to as rusting. Rust, as a substance, is called iron oxide, and as many of us know, the reaction can do severe damage in a relatively short amount of time.

RELATED: How to Rust Metal for a Perfectly Weathered Look

Copper does not rust, but it does corrode.

Nonferrous metals like copper do not create iron oxide, so technically they don’t ‘rust.’ However, they do react with their environment and so they eventually oxidize—or corrode.

When copper reacts with air it produces copper carbonate, which is the greenish-blue color found on copper as it ages. It’s also known as verdigris, and also can be found on brass (which is an alloy of copper and zinc) and bronze (which is copper and tin).

Copper is easy to clean and there are several methods. It’s possible to protect copper by applying a clear lacquer. However, with decorative copper items, there are reasons you might not want to clear coat them.

The coloring of copper and the building up of the carbonate layer is called a patina. Once formed, it actually slows the chemical reaction down. So while corrosion is still taking place, it’s much less damaging than when corrosion happens to steel. One expert source says the process can take 90 years or more to cause the same amount of harm.

This durability has long made copper a popular roofing material and beautiful green domes can be found around the world. Some are hundreds of years old and have had no protection from the environment. Yet they can be expected to last as long as 1,000 years.

So does copper rust? Strictly speaking, no. However, it oxidizes, which is basically the same kind of process. Whether you want to prevent it is a personal choice, but many find the aged patina to be extremely attractive.

How To: Unclog a Sink Drain

20 Cheap Home Repairs That Could Save You Thousands

The Complete Illustrated Guide to Unclogging a Drain