What’s the Difference? Induction vs. Gas and Electric Stoves

Learn why induction cooking is faster, safer, cooler—and pricier—than traditional stoves so you can choose the best appliance for your home. 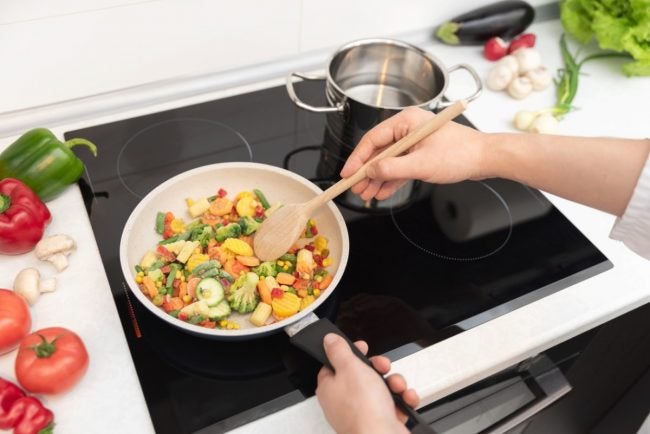 Unlike a conventional gas or electric stove, an induction cooktop doesn’t produce thermal heat. Instead, electromagnets inside the burners transfer energy to the cookware on top of them. That energy causes the pots and pans to heat, cooking the food inside.

Although induction cooktops have been around since the 1970s, they’ve just recently started to gain traction in the marketplace. The global household induction cooktop market will reach more than $13 billion by 2022, according to Allied Market Research. In March of 2019, 18 of the 21 induction cooktop models tested by Consumer Reports made their list of recommended models. Induction technology certainly has its advantages, but a gas or electric stove may still better suit your lifestyle, budget, and cooking needs. Read on to compare them side by side—induction vs. gas and electric—so that their major differences can help you make the best decision for your kitchen.

Induction cooking uses magnetic fields to generate heat, which can be introduced and adjusted instantly. As a result, you can get a pot of water to a rolling boil much more quickly than with the thermal conductivity provided by gas or electric ranges. Induction cooking is fast, responsive, and precise, which makes it popular with professional chefs and home cooks alike. Because heat is created immediately in cookware through induction, “food heats up and water boils 50 percent faster on induction cooktops when compared to electric or gas cooktops,” according to Frigidaire, one of the country’s leader’s in induction technology.

Induction stoves are more energy-efficient than gas or electric options.

As the gas flame or electrical coils on a traditional range transfers heat to cookware, there’s ample opportunity for heat loss into the air. There’s far less energy loss on an induction cooktop, because cookware heats as a reaction to the electromagnetic forces created by the induction burner. In fact, up to 90 percent of the energy produced on an induction range is transferred to food, compared to about 74 percent on a traditional electric range, and 40 percent on a gas range, according to a study published in the American Council for an Energy-Efficient Economy’s Summer Study on Energy Efficiency in Buildings. As a bonus, virtually no heat loss in induction cooking means your kitchen won’t feel uncomfortably hot during cooking.

RELATED: These are the Biggest Electricity Hogs in Your Home

Induction cooktops are pricier than their traditional gas and electric counterparts partly because they are more complex, and partly because fewer are currently sold (basic supply and demand economics). Prices have come down in the last several years because lower and mid-range priced models are more plentiful now. However, a mid-range induction range could easily cost you $2,000, where a comparable electric model would cost $500. The least expensive, lowest end induction range runs about $800.

Because the energy expended for cooking is such a small part of your overall energy bill, you cannot expect an induction range’s energy efficiency to make up for its higher up-front cost. Purchase an induction range because you like the way it cooks, not because you think you’ll save money in the long run.

Induction may require a cookware replacement.

Induction cooktops work by “exciting” the iron atoms in cookware through a magnetic field. The electromagnetic field causes the particles in those atoms to move faster and faster, generating heat. As a result, only cookware that contains a magnetic metal will work on induction ranges.

Stainless steel cookware varies in its alloys, so a stainless steel pot made with an iron alloy will work on an induction range, while a nickel alloy will not. To test your cookware for compatibility, hold a magnet to the bottom. If the magnet sticks, the pot is magnetic and will work for induction. Pots and pans that are not magnetic, such as aluminum, will have to be replaced. Many cookware manufacturers now stamp a looping coil symbol on the bottom of cookware that signifies induction compatibility.

In induction cooking, there is no heating element or open flame, and the range itself does not get hot, so the risk of accidental burns is far lower. In fact, you can put a piece of paper between the burner and the pot, and cook food without burning the paper. What’s more, an induction element immediately turns off when a pot or pan is taken off the cooktop, so there’s no chance of accidentally leaving a burner on. And a faulty burner on a gas range can release deadly carbon monoxide into a home; that can never happen with an induction range.

Cleaning is quick and easy with induction stoves.

Induction cooktops have a smooth glass surface, not unlike many modern electric models. However, an induction burner never transfers heat to the actual stovetop, so spills and splatters won’t burn—and then stick—to the surface. Any clean-up required can be done quickly, because as soon as an induction burner is turned off, it will almost immediately be cool enough to touch and wipe down.

Gas or Electric? Choose Your Next Stove Wisely
Advertisement

How Much Does It Cost to Replace a Glass Stove Top?

The Best Induction Ranges for Your Home