How to Unclog a Garbage Disposal

Is your garbage disposal not working? Understanding the most common causes of clogs and how to fix them will keep money in your wallet, rather than sending it down the drain. 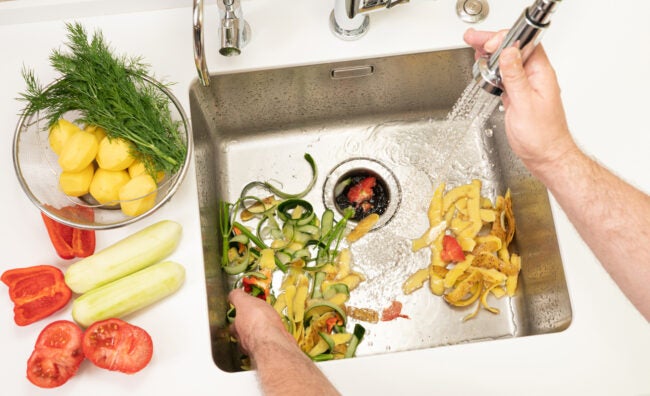 When faced with the conundrum of how to unclog a garbage disposal, most people would say that the easiest solution is to call a plumber. The easiest choice, however, may not always be the fastest or most cost-effective solution. Learning how to fix a garbage disposal on your own is easy, and requires nothing more than a few pantry staples and some tools you probably already have. Clearing the clog yourself could save you the cost of a service call (which, in most places, is over $100). Less tangible but no less important, you’ll also gain valuable DIY experience, and confidence to take on even more complicated repairs in the future.

A homeowner’s knee-jerk response to a clogged garbage disposal is often to stick a hand into the appliance and attempt to dislodge whatever is causing the clog. Don’t! You’re risking a grisly injury by exposing your fingers to the disposal’s blades. Cut off power to this potentially harmful appliance at the breaker before you make any attempts to unclog a garbage disposal. Because the food scraps and other gunk inside a garbage disposal are pretty gross you may want to don some dishwashing gloves before you get started, too.

STEP 1: Turn off the power at the breaker box.

For homeowners attempting repairs, the first thing to do is turn off the breaker that controls the disposal. A successful home repair will never be as memorable as a trip to the emergency room.

STEP 2: Try to identify what is causing the clog.

Once the breaker is turned off, shine a flashlight into the disposal. Do you see any objects that could be causing the clog? If so, use a pair of long-handled tongs or pliers to carefully retrieve these items and clear the way. Once all visible items have been removed, turn the breaker back on, turn the water on, and then turn on the disposal. (It may be necessary to push the reset button on the disposal—it’s usually found on the underside of the appliance.)

If it drains water and works properly, give yourself a pat on the back. If the disposal is still clogged, continue to Step 3.

STEP 3: Use a plunger to clear leftover food scraps.

Turn the breaker off again. Since there are no more foreign objects to retrieve, it’s time to consider another cause of the clog: lingering leftovers. Food can clog a garbage disposal when it isn’t broken down enough to be flushed out of the drainpipe. In these situations, it’s helpful to use a plunger first to try to loosen food that has clogged the disposal.

After covering the drain completely with the plunger, allow water to cover the edge of the plunger and plunge the drain a few times. If water begins to drain, it’s a good sign that food scraps might do likewise. If so, turn on the breaker and disposal to see if the food remnants can be processed through the drainpipe. If they don’t budge, it may be time to prepare a cocktail—for the clogged drain, that is.

STEP 4: Use baking soda and vinegar to dislodge the clog.

Many garbage disposals contain plastic parts, and using harsh drain cleaners can degrade those parts. The combination of baking soda and vinegar offers comparable unclogging power, but on a much gentler scale.

Ensure again that the breaker and disposal are both powered off, and pour ¼ cup of baking soda into the garbage disposal. Next, pour ½ cup of white vinegar over the baking soda, and be prepared for fizz and foam.

After 5 to 10 minutes, turn the breaker and the disposal back on and run hot water into the disposal for another couple of minutes. (Again, you may have to hit the garbage disposal reset button to get it started.) If the disposal is functioning properly, call it a day and make yourself a cocktail this time. If not, proceed to Step 5.

STEP 5: If all else fails, call a plumber.

Turn the appliance and the power back off and call a plumber. After the plumber clears the problem and goes on her way, however, there’s ongoing maintenance to be done. To prevent another clog, it’s important to maintain the appliance by following the steps outlined below. Just a few minutes of maintenance every few weeks can save you headaches down the road.

How to Prevent Garbage Disposal Clogs

A clogged garbage disposal can be a pain, especially when it happens an hour before a dinner party. Most clogs are pretty simple for novice DIYers to fix. Always remember to turn off power to the appliance before taking any steps to unclog it. The best way to deal with clogs is to prevent them altogether with regular garbage disposal care and taking easy steps to prevent said clogs, including using the disposal daily.

If you’re wondering which side you need to plunge for clogs in a double sink or how to determine when it’s time to throw in the towel and pony up for a plumber, read on for more information about unclogging garbage disposals.

Q. Why is my garbage disposal not draining?

If your garbage disposal isn’t draining, it’s likely because there is food waste clogging the drain. Running the garbage disposal should clear this waste and cause the disposal to drain. A garbage disposal that won’t turn on likely has a clog that needs to be cleared. If the appliance is functioning properly, it’s possible that the culprit is a clog in the sink’s drain piping.

Q. Will baking soda and vinegar unclog a garbage disposal?

The vigorous reaction that occurs when vinegar mixes with baking soda can be enough to clear minor to moderate clogs in a garbage disposal. Pour ½ cup of baking soda into the garbage disposal, add a cup of vinegar, plug the drain and wait for 10 minutes. Then rinse the disposal with hot water.

Q. Whom should I call when I cannot unclog my garbage disposal?

Q. Can I plunge my clogged garbage disposal?

You can use a plunger to attempt to unclog a garbage disposal. Begin by clamping the rubber drain line that leads from the drain to the dishwasher. This will allow you to create the necessary pressure inside the garbage disposal to plunge. Place a plunger over the drain then add a few inches of water to the sink. Plunge about a dozen times to dislodge the clog.

Q. How do you unclog a double sink with a garbage disposal?

Q. How long does it take to unclog a garbage disposal?

If the clog is not severe, you can unclog a garbage disposal in about 15 minutes using either a plunger or a mix of baking soda and vinegar. If the clog is severe, you may need to call in a professional plumber to clear the drain.

9 Tips for Keeping Your Garbage Disposal in Top Shape
Advertisement

Solved! What to Do When Your Kitchen Sink Is Clogged

Solved! What to Do When Your Dishwasher Is Not Draining