Clover has gotten a bad reputation over the years, but it's high time to let this grass-friendly ground cover start growing in your lawn again. 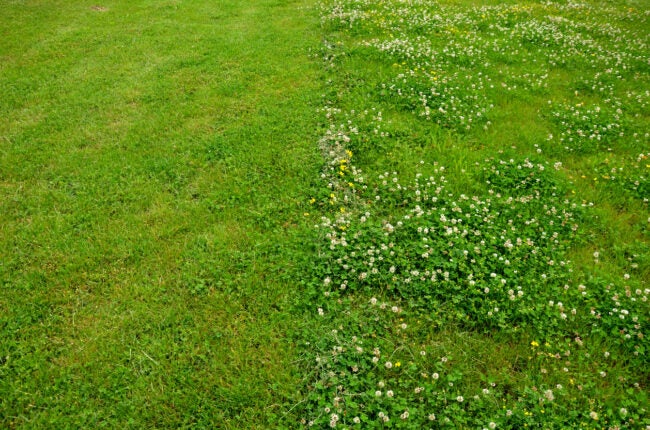 Many folks consider the perfect lawn to be beautifully manicured turf without a weed in sight, but what about clover? Clover is a dense ground cover recognized by its shamrock-shaped leaves, and there are more than 300 species worldwide. Though often considered a weed, this low-to-the-ground plant is actually a legume, just like peas and beans.

Before the invention of broadleaf herbicides, Dutch white clover used to come standard in grass seed mixes, which was beneficial for yards everywhere. We say it’s time for this legume to make a comeback.

Here are some reasons you might want to encourage clover to grow in your yard.

Mixing clover with turfgrass offers benefits that make your yard healthier without the use of chemicals. Known as a living mulch, or natural fertilizer, clover takes nitrogen out of the air and soil, converts it to a plant-friendly form, and feeds it to the grass and other plants to help them thrive. Clover naturally moves into areas with poor, nitrogen-deficient soil and works its magic to improve growing conditions.

Clover doesn’t get compacted easily, and its presence helps break up compacted soils, minimizing the need to aerate your lawn. Clover also requires less frequent mowing than most turf, giving you a greener-looking yard for most of the year with less effort to keep it looking fresh.

Clover is helpful to your soil, and the plants that surround it, and it cuts down on your chore time, but it gets even better. Clover blossoms attract honeybees and other pollinators to the area, further improving your backyard ecosystem.

Left to their own devices, turfgrasses tend to have a tough time competing with weeds and warding off insects. Without intervention from you, both of these issues can become big problems for your yard.

Though often mistaken for weeds themselves, clovers do the dirty work, using their strength and cover to keep other weeds from thriving. These legumes quickly form clumps that spread rapidly by secondary roots, which naturally crowd out broadleaf weeds. You might think this means clover will overtake your turf as well, but on the contrary, clovers are kind to grasses, and they grow quite well together.

In fact, a yard with clover doesn’t usually require that homeowners use harsh herbicides for weed control, which is why clovers often are used in agriculture as cover crops between growing seasons to protect the soil’s integrity. Even better, clover attracts pollinators and invites other beneficial insects like ladybugs, minute pirate bugs, lacewings, and others that prey on smaller pests. These little garden predators feed on aphids, scales, whiteflies, and similar pests that harm to your plants.

RELATED: The 12 Biggest Landscaping Trends for 2022

Drought season, dog urine, and too much shade can all make grass unhappy, which reflects in dead spots or poor color. Clover, on the other hand, is tough enough to remain largely unaffected by all of these conditions—even canine companions.

Unlike grass, clover isn’t picky about where and how it grows. In poor-draining, low-quality, or compacted soil, clover can still thrive and remain green. It requires less water than most turfgrasses once it’s established, so it is suitable for climates that experience drought.

Clover is considered semi-evergreen or evergreen, depending on the region. It grows in areas ranging from full sun to partial shade, which is more appealing than some turfgrasses for spots that tend to get scorched or for shady sections in the yard.

11 Garden Fence Ideas That Will Complement Any Landscape

No Mow May: 8 Reasons to Let Your Lawn Grow for a Month
Advertisement

12 Ways to Rewild Your Suburban Plot

A Bob Vila Pest-rospective of the Year's Worst Bugs