Keep your lawn lush even in low-rainfall periods with these hardy grasses. 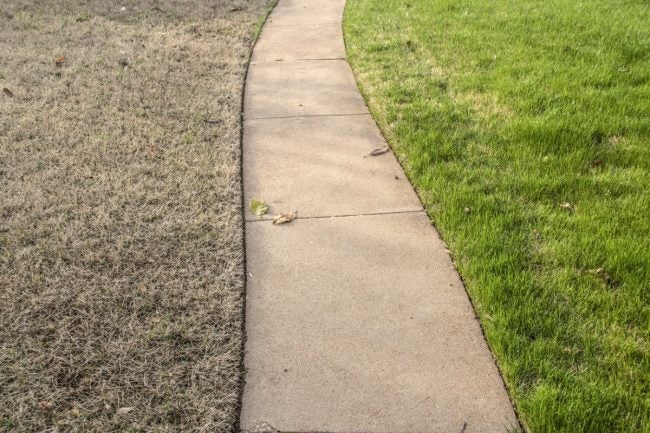 Q: I want to reseed my lawn with a grass that can tolerate the scarce rainfall my region has been getting in recent summers. What’s the best drought-resistant grass?

A: You’re wise to factor drought resistance into your choice of turf. When a dry season strikes, either due to a period of little rainfall or prolonged local watering restrictions, water-loving grasses like Carpet grass will quickly brown and die due to their high watering requirements, shallow roots, or poor ability to go dormant temporarily. Not so with drought-tolerant grasses that can survive and even retain their green good looks during a dry spell—thanks to low watering requirements, efficient root systems, above-or below-ground stems that repair bare or damaged grass patches, and/or the ability to go dormant and recover when water is restored. Read on to learn the best drought-resistant grass to plant for a verdant dry-season turf.

RELATED: 7 Smart Ways to Save Water in the Yard

Choose a grass that thrives in your climate.

Like all turf grasses, drought-resistant grasses fall into two categories: warm-season or cool-season. Choose the right grass for your climate zone to ensure that it grows well in the temperatures in your area.

The best drought-resistant grasses for warm-season climates include Bermuda, Zoysia, and St. Augustine.

Maintain the drought-hardiness of your lawn by planting in the appropriate growing season and minimizing other sources of stress to your lawn.

Plant cool-season grasses in the early fall or spring, and warm-season grasses in early summer or spring, to ensure faster seed germination. During dry spells, use the tips below to maintain the health of your drought-resistant grass. If it’s too late in the season to plant grass seeds, or you don’t have the time or desire to reseed your existing lawn, you can also enlist these techniques to make a traditional turf more tolerant of dry conditions:

RELATED: The 18 Best Things You Can Do for Your Lawn

The Best Grass Seeds for the Northeast of 2022
Advertisement

The Best Kentucky Bluegrass Seeds for a Beautiful, Lush Lawn

The Best Grass Seed for Michigan of 2022

Solved! This Is When to Fertilize the Lawn