All You Need to Know About German Smear

Are you looking for a way to update your home’s dated bricks without painting over them? Check out one of today’s hottest design trends: German smear. 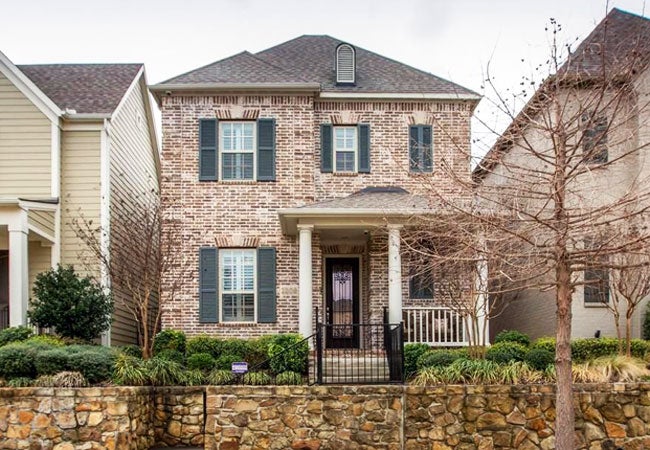 Worn-down bricks make any home look unfashionable and outdated. Instead of shelling out big bucks to repaint their exterior, homeowners can consider an affordable DIY upgrade: applying German smear. As a type of mortar wash, the trendy design treatment is achieved by spreading wet mortar over the bricks, then removing some before it dries. The result is charming exterior siding reminiscent of the Old World. Read about the details of German smear to determine if the technique is right for your home.

German smear mimics the look of irregular stones and heavy mortar joints, a style often found on centuries-old cottages and castles throughout northern Germany. The technique is akin to whitewashing bricks, but instead of using diluted latex paint, homeowners coat the brick with a layer of wet mortar. The mortar adds a rough texture, thus creating a rustic and distressed appearance. It also gives the bricks partial coverage, which softens the harsh straight lines that exist in traditional brick siding and creates an irregular pattern. Although traditional German smear involves white mortar over red brick, homeowners can experiment with various brick colors and mortar tints. What’s more, German smear isn’t confined solely to home exteriors; some people update their interior brick walls and fireplaces using the technique.

Get a pro to do it for you
Receive free, no-commitment estimates from pro painters near you.
Find local pros

The Pros and Cons of German Smear

While the actual laying of brick requires a skilled mason, a handy DIYer can apply German smear with professional-grade quality. The process is labor-intensive, but it’s also relatively inexpensive: 1,000-square-feet of brick siding requires about three 80-pound bags of premixed mortar (about $10 each), which brings the total cost of materials to approximately $30. By comparison, hiring a masonry contractor to apply German smear could cost anywhere from $1,500 to $3,500, depending on the going rate for masons in your region. If you decide to apply German smear yourself, be prepared to dedicate a few days to completing the project on a small- to medium-sized home. Also keep in mind that German smear is a permanent treatment that can’t be removed easily, and it only works over bare brick. The mortar won’t adhere to a brick surface that’s already been painted.

How to Apply German Smear

Mortar, which is used to bind and seal pieces of building block, often consists of blended Portland cement, lime, sand, and water. If the first three ingredients aren’t mixed with the correct ratio, the mortar can fail and crumble. Therefore, instead of trying to mix your own mortar, we recommend purchasing a premixed blend, to which you’ll only need to add water. Mortar comes in two basic color choices: white and gray. Coloring additives are available for creating brighter white or earth-hued shades.

First, you’ll need to prep the brick for German smear. Remove dirt, grease, and mildew by brushing the brick with a stiff bristle brush or spraying it with water. There’s no need to remove hard water stains from the surface of the brick, because these won’t impact the adherence of the mortar.

Next, create your mortar slurry by combining water with the mortar mix in a 5-gallon bucket. A standard ratio is 70 percent mortar to 30 percent water, which will create a peanut butter-like consistency, but you can change the proportions to your liking. To create a heavily textured German smear, try adding less water. For a thinner and more translucent texture, add more water. Consider making some test batches of mortar and applying them to spare bricks before you start on the main project. Blend the mixture using a heavy-duty drill, fitted with a concrete paddle bit.

Before applying the German smear, you’ll need to dampen the bricks to prolong the drying time of the mortar, allowing more leeway to perfect the finish. Spray the bricks with water from a garden hose if you’re outside, and wipe a wet stucco sponge over the bricks if you’re working on an interior wall or fireplace.

Put on old clothes, heavy rubber gloves, and protective goggles. Then smear the wet mortar over the bricks with a gloved hand, a grout sponge, or a trowel.  Work from top to bottom in small areas, approximately five feet by five feet, and make sure to spread the mortar into the joints. Before the mortar begins to set (which can take anywhere from 20 to 45 minutes, depending on the temperature and humidity) use the trowel and/or a wire brush to remove some of it from the surface of the bricks. How much you remove depends on personal preference. If you take off a small amount of mortar from random bricks, you’ll end up with a softly muted look, since merely a hint of the original brick color will show through. On the other hand,  if you remove a large amount of mortar from the bricks, the final result will appear as if irregular-sized bricks are set in wide mortar joints.

Mortar adheres strongly to masonry, so your German smear will be permanent once dry. When necessary, spray exterior brick with a garden hose to remove built-up dirt or dust. Eradicate soot deposits on interior brick fireplaces with any brick-cleaning product, or an equal mix of vinegar and water. Don’t worry about the mortar washing off over time; it’s very difficult to remove dried mortar from brick, and the process usually involves extensive scrubbing with a chemical like muriatic acid. So sit back, relax, and enjoy your German smear for years to come!

Get a pro to do it for you
Receive free, no-commitment estimates from pro painters near you.
Find local pros

Bob Vila Radio: The Brick Treatment You Should Try
Advertisement

All You Need to Know About Stucco Homes