This Stud Finder Requires No Calibration―Is it Right For You?

Electronic stud finders help pinpoint the location of studs behind plaster and wallboard. See how a popular model―the Franklin ProSensor stud finder―fared in our hands-on testing. 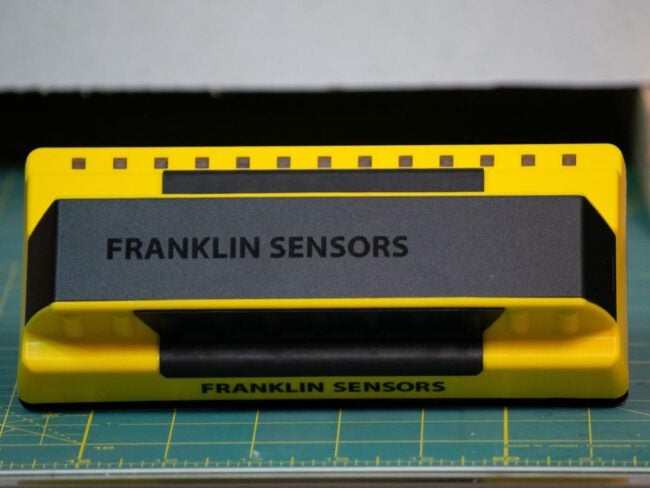 Finding the location of a stud behind drywall is essential for a host of projects, such as hanging heavy artwork or installing shelves. While the pros have a few tricks for finding studs, the simplest way—by far—to locate them is with a stud finder. With that in mind, we tested one of the most popular stud finders on the market today, the Franklin Sensors ProSensor 710, to see if it lived up to its reputation. Keep reading to learn how I tested the Franklin ProSensor 710 and find out how well it scored in each of the tests.

Verdict: I was sold on the reliability and ease of use of the Franklin ProSensor 710 stud finder that pinpoints a range of stud configurations.

What is the Franklin 710 ProSensor Stud Finder?

While many electronic stud finders have just one or two sensors, the Franklin ProSensor 710 features 13 individual sensors that correspond with each of its 13 LED lights. This design gives it the ability to pick up more than just a single stud, which is a weakness of most stud finders.

Before testing the Franklin ProSensor 710, I constructed a test wall consisting of both single and double studs to see how well this stud finder would perform. The test wall was a scaled-down model of a standard wall with drywall only on the lower portion. The upper part included the top of the visible studs so I could see if the stud finder accurately pinpointed their location.

The Franklin ProSensor 710 is 7.25 inches wide, with an LED light range of 6.25 inches, making it possible to detect a single 2×4 stud with a width of 1.5 inches or a double stud with a combined width of 3 inches. As I slid the stud finder across the drywall, the LED light associated with each sensor lit up, indicating a stud was directly beneath.

The first features that struck me when I opened the package were the solid feel of the stud finder and its simple design. Unlike most electronic stud finders, the Franklin ProSensor 710 doesn’t take a 9-volt battery but instead accepts two AA batteries, which are less expensive and often easier to find.

Along the top edge, I spotted a built-in ruler that isn’t readily noticeable because it’s embedded in the molded plastic design. I like the idea of having a ruler to measure the distance between close-set studs, but it would be better if the ruler were in a contrasting color so it’s easier to see. As it is, the hidden ruler is not very practical.

Keep in mind that stud finders are density-sensing tools, meaning they detect variations in density. When I turned the Franklin ProSensor 710 vertically and slid it up and down over the double studs in the test wall, I did not get a reading of any type. This is because the stud finder did not sense any density difference—the double studs were wide enough to cover all the sensors, so it could not determine that studs were present. As soon as I turned the Franklin ProSensor 710 back into a horizontal position, it immediately picked up the studs.

The handgrip on the Franklin ProSensor 710 is designed for single-hand use, and the “On” button is located along the top. I found it comfortable and easy to depress the button with my fingers while I was gripping the tool. This left my other hand free to use a pencil to mark the studs. By contrast, I came across a few models when testing other stud finders that required both hands to slide them or select different modes.

One of my main complaints when using some stud finders is the complex process I have to go through each time I turn on the tool to calibrate it. This often involves selecting a desired material mode, such as wood or metal, and then holding the device along the wall and pressing another button to calibrate the finder. With some stud finders, simply lifting the tool from the wall results in the need to recalibrate it to find another stud. After a while, that can become annoying.

Fortunately, this is where the Franklin ProSensor 710 shines. No user calibration is necessary. All I had to do was press the “On” button and start sliding the tool across the drywall—it automatically calibrated itself. No matter how many times I lifted the stud finder or released the “On” button and pressed it again, this stud finder was always ready to go and accurately detected the studs. The automatic calibration ability is undoubtedly one of my favorite features of this tool.

How Deep Does the ProSenor Detect Studs?

The Franklin ProSensor 710 is advertised as always being in deep-detection mode and should pick up studs as deep as 1.5 inches beneath the wall’s surface. Other stud finders can also detect through thicker walls but not before the user has to switch from the standard mode to a deeper detection mode.

My test wall only had a single layer of 1/2-inch drywall, so I tested the Franklin ProSensor 710 on the wall of our master bedroom, which was constructed from two layers of 5/8-inch drywall for added sound resistance. The stud finder picked up both single and double studs beneath the 1¼-inch layer of drywall—just as well as it had through the thinner drywall on the test wall.

It’s also worth noting the ease with which the Franklin ProSensor 710 glides across walls, even walls with flat paint. Inspecting the backside of the stud finder, I discovered two thin strips of Teflon-like material along the top and bottom edges. These slick strips allow the stud finder to move effortlessly across the walls without leaving scuff marks.

Is the Franklin ProSensor Accurate?

When it comes to price vs. value, the Franklin ProSensor 710 comes out on top. I’ve owned both less expensive and more expensive stud finders, but the simplicity and accuracy of this stud finder make it well worth the approximate $50 price tag.

Shoppers who need a stud finder only on rare occasions for hanging artwork or a ceiling light could probably get by with a more inexpensive tool. For my purposes, and for most pros who regularly need to find studs and determine various stud configurations, the Franklin ProSensor 710 is well worth the added expense.

As a comparison, the least expensive stud finders (around $10) don’t run on batteries but instead feature internal magnets that locate studs by physically pulling toward metal screws or nails in the studs. These stud finders are economical and accurate, but it can take a few minutes to find a metal fastener in a stud. High-end electronic stud finders, which can cost more than $100 and pair with a smartphone, perform a wide range of detection tasks, such as locating live wires and creating a digital map of a stud wall. Still, for those who just need to detect studs (metal or wood), the Franklin ProSensor 710 is a reliable, affordable device.

Should You Choose the Franklin ProSensor 710?

For those involved in remodeling or frequent DIY projects that include installing shelves or hanging heavy artwork on walls, the Franklin ProSensor 710 is dependable, efficient, and durable. Plus, it takes AA batteries, which many shoppers are more likely to have around the house than the 9-volt batteries required for most other electronic stud finders.

The Franklin ProSensor 710 is especially well-suited to those who work in the construction trades, as it’s an affordable investment in a quality tool that will quickly help pinpoint not only where a stud lies but also help determine whether it’s a single stud or a double stud. This stud finder will also reveal the small spaces between closely spaced studs, ensuring informed cuts in the drywall without guesswork.

For the best results when using the Franklin ProSensor 710 on a standard wall to locate studs, slide the tool horizontally to pick up vertical studs but also slide it vertically to pick up horizontal bracing or fire-blocking installed in the wall studs.