I Tested the Feature-Rich Google Nest Protect. See How It Performed and If It’s Worth the High Price

At more than three times the price of the average smoke detector, is the Google Nest Protect worth the money? Join us as we put it through its paces! 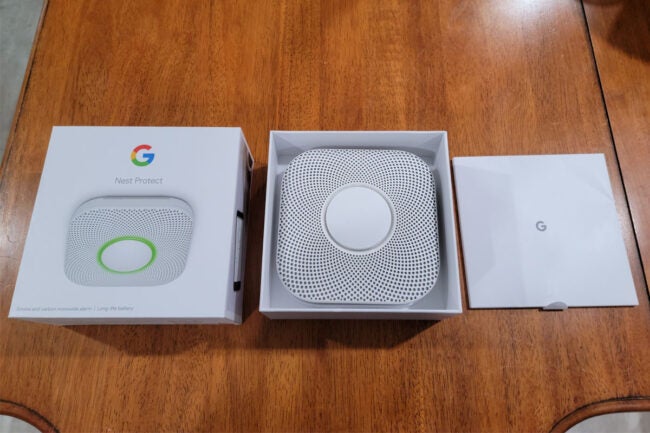 Few folks will argue about the importance of having high-quality, reliable smoke detectors in their home. The sole purpose of these devices is to alert people to life-threatening situations, and skimping on them is never worth it. But is going all in on a top-of-the-line smoke detector unnecessary? This hands-on review of the Google Nest Protect smoke detector will answer that question.

The Google Nest Protect is a combination smoke and carbon monoxide detector priced at over three times as much as a typical combo detector (which is usually between $25 and $30). The premium price nets you a variety of features, including advanced dual-sensor technology, clear voice alerts, wireless interconnection, a handy pathway light, and mobile connectivity, to name a few. Also keep in mind the value of the reliable Google brand in a smart-home market flooded with low-quality knockoffs.

I performed hands-on testing of Google Nest Protect to help consumers decide if this smoke detector is worth its high price tag. I put Nest Protect through its paces to judge how easy it was to install and connect with my phone, and also how quickly and well it activated under smoke conditions (simulated smoke, of course). Keep reading to find out how it fared so you can decide if it’s right for your home.

Google Nest Protect: At a Glance

Get the Google Nest Protect at:

What Is the Google Nest Protect?

For those unfamiliar with the Google Nest Protect, let’s first take a quick dive into the device, as it’s not a typical smoke detector. Nest Protect is essentially three life-safety devices in one, offering carbon monoxide detection and two types of smoke detection, thanks to its dual-sensor technology. Depending on their method of detection, most smoke alarms can detect either fast-burning or smoldering fires. Google Nest Protect can pick up both for faster, more accurate detection of dangerous situations.

What’s more, Google Nest Protect also interfaces with the Nest app, which users can link with the smoke detector to alert them to dangerous situations, even if they aren’t home. If Nest Protect detects carbon monoxide or smoke, or is simply low on battery life, it will send an alert to the user’s phone. At the same time, it will provide clear voice alerts to help minimize confusion in an already hectic environment.

Via the Nest app, users can also interconnect several Protect detectors throughout the home—a huge benefit since if one device alerts, all the devices will activate. And since Google Nest Protect provides voice alerts, it will give everyone within earshot an accurate description of the hazard and its location.

Finally, while Nest Protect may look like nothing more than a speaker, it has a built-in pathway light that will give a blue-colored night-light when it detects motion. This light will turn solid red when sounding the alarm, helping residents orient themselves in smoke conditions.

How Easy Is the Google Nest Protect to Install?

From the moment I opened the package, it was clear that Google Nest Protect was unlike any smoke detector I’ve ever used. It came in a perfectly telescoping two-piece box with clear installation instructions—not just what to put where but the correct order in which to do so. Advanced as this detector is, these instructions made it very easy to install.

With most smoke detectors, the first step is installing the base on or near the ceiling—and that’s the case with Google Nest Protect. It came with four high-quality mounting screws and a base with an inlay of gasket-type material. The ring mounted to the ceiling without issue and seemed to be of far better quality and material than other models I was testing at the same time.

When installing standard smoke detectors, this is the point where you put the batteries in, snap the smoke detector to the base, and hit the test button. That’s not the case with Google Nest Protect. First, you must pull a tab out of the unit to activate the built-in batteries. Then you download the Nest app (more on that below) and scan the QR code on the back of the Protect to link it.

The device then initiated a self-test sequence, after which I was able to install it on the base without issue. In fact, the base has ample adjustability that allowed me to position the Protect to be perfectly square in relation to the walls (something that the fussiest of DIYers will appreciate).

How Easy Is the Google Nest Protect to Set Up?

It’s helpful to look at installation (physically mounting the smoke detector to the wall) and setup (downloading the app and linking it to a device) separately. Installation, as explained above, was simple. Setup, however, had one small hiccup.

As previously mentioned, Google Nest Protect needs to connect with a mobile device before mounting it to the ceiling. There is a QR code on the back of the device that aims to make the setup as simple as possible. All that’s required—in theory—is downloading the Nest app and scanning this code. But it took a few tries before I could successfully link the Google Nest Protect to the Nest app on my Samsung S21 Ultra. This certainly wasn’t a Wi-Fi issue, as I was no more than 15 feet from the router. However, the Protect did eventually link, and from that point forward, it was smooth sailing.

Setting up the Google Nest Protect requires assigning a name, which is done through the Nest app. This is for a few reasons, such as checking the status on individual devices, but mainly so the voice alarm can clearly describe the hazard and its location in an alarm event. I assigned mine as “office,” as that’s the room in which I tested it.

Looks and tactile feel are all the rage when it comes to smart devices, but does that really matter in regard to life-safety devices? Maybe not, but it could be quite the bonus.

While testing the Google Nest Protect, I also tested several other smoke detectors. The Nest Protect stood apart in appearance, blending into the room and looking more like a speaker than a smoke detector. And since the base (i.e., mounting ring) allows the user to adjust the position of the device rotationally, a quick adjustment allows it to sit square in relation to the wall and ceiling for a pleasing aesthetic.

There’s also a round button in the middle with a normally blue light that glows softly when it detects motion. However, that same light turns bright red in alarm conditions, and the button in the middle silences the device. With many other smoke detectors, the silence button is hard to find and the action is so slight that I’d wonder if I actually pressed the button if the alarm didn’t silence right away. With Google Nest Protect, there’s no guessing—the tactile feel and slight “clunk” of the button speaks for itself (especially since the alarm silences almost immediately).

The Nest app is also well designed—very straightforward and easy to use (once the device syncs, that is). Checking the status of the device at any time is simple and easy.

How Did the Google Nest Protect Perform?

The good looks and feel of Google Nest Protect wouldn’t mean a thing if the device performed poorly, so I simulated smoke conditions with a can of synthetic smoke developed specifically for testing smoke detectors.

After spraying two quick puffs of canned smoke toward the device, it took 10 seconds to start alarming: “Smoke emergency in the office!” It then began chirping like a standard smoke detector while continuing to describe the hazard. Compared to the other smoke detectors, Nest Protect had one of the fastest alert times. In a situation where this device would be connected to other devices, all would alert with the same speed and clarity.

When I silenced the alarm, it immediately stopped sounding—a function at which many other smoke detectors fail terribly. One press of the large button and the device was quiet.

Is the Google Nest Protect Worth the Money?

The Google Nest Protect retails for $119 at just about every retailer that sells it, with multipacks also being available for a slight savings per device. That’s a lot of money for a smoke detector. But if I consider what cheaper devices offer, I consider the price tag justified.

During my hands-on testing, three out of eight smoke detectors from other brands simply refused to silence, while three of the others required several “hushes” before the alarm would stop. One device that synced with an app for mobile access, and cost considerably less than the Protect, also required the purchase of a separate hub. The one other device in my testing that had voice commands wasn’t quite as clear as the Protect, lacked customizable room names, and didn’t interconnect with other devices.

The Google Nest Protect did all these things well. The only challenge I had was syncing it with the app, which was more of an inconvenience than a deal-breaker. All in all, the $119 price yields a well-designed device that works as it should and integrates with an equally well-designed app.

Should You Buy Google Nest Protect?

Ultimately, the goal of reading any review is to determine whether or not a product is worth buying. But considering Google Nest Protect’s price and the purpose it serves, it’s challenging to boil this down to a simplified answer.

If there are budgetary constraints and you need to choose between saving for a Protect or providing smoke detector coverage within the home, go for standard protection now. It’s far more important to have some smoke and carbon monoxide protection at all times than to wait till you can afford a better model, leaving the home unprotected. In this case, an affordable, reliable smoke detector such as a basic First Alert SCO5CN Combination Smoke and Carbon Monoxide Detector will more than do the trick.

However, anyone already invested in the Nest line of smart-home products will likely love the Google Nest Protect for its high-tech approach to fire safety. Also, anyone with a large home who might not know immediately where a hazard could be happening may rest easier with Protect’s interconnectivity and voice alerts. And folks who want the peace of mind that comes from checking on their home when they’re away will also enjoy the app interface.

The Google Nest Protect is certainly a premium-priced product. But it’s well designed, easy to install and use, and offers more than any other smoke detector on the market.

Where to Buy the Google Nest Protect

Get the Google Nest Protect at:

The Best Smart Thermostats of 2022