Solved! Where to Place the Smoke Detectors in Your House

Yes, there are correct and incorrect locations to install life-saving smoke detectors in the home. Here's where they should go, and how to ensure they’re up to code. 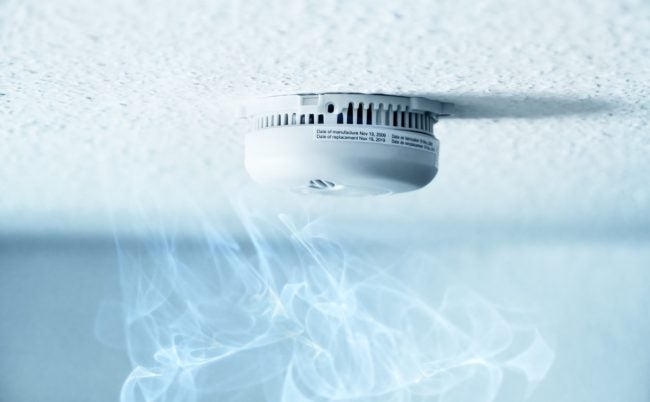 Q: We’re building a large addition on our house. It will include two bedrooms, a vaulted great room, and two additional bathrooms. Where should smoke detectors be placed in our home for the greatest fire safety?

A: Kudos to you for thinking about this small yet crucial detail! There are guidelines for where to place smoke detectors in your home that you should keep in mind. In fact, even if your current ones are in the appropriate locations, you still may need to upgrade the devices in the older parts of the house at the same time that you install new ones in the addition. International Residential Code (IRC), a comprehensive compilation of safe building guidelines, includes a requirement to upgrade an entire home’s smoke detection system at the same time any major remodeling occurs, such as the large addition you’re building.

First, to meet code, for additions, know that smoke detectors must be connected to one another, either wirelessly or wired to the home’s electrical system. This is called an “interconnected” system, and if one smoke detector goes off, all of them will, alerting folks throughout the house. While existing areas of a home don’t need to be interconnected, it’s a good idea to update the battery-operated smoke detectors already in your home with an interconnected system.

Call your local building authority to find out if your community has adopted IRC’s smoke detector rules. Fortunately, the guidelines as to where to put smoke detectors are simple, so keep reading to learn how many you’ll need and where to place them to protect your family.

Install detectors on or as near to the ceiling as possible.

Many smoke detectors are designed to mount to a ceiling, but some can also be wall-mounted when attaching to a ceiling isn’t feasible, such as when it would be impossible to retrofit the wires necessary for connecting them. In this case, smoke detectors should be within a few inches of the ceiling. IRC requires the installation of a detector within 12 inches of the ceiling, but the closer, the better (in most cases).

Install a smoke detector in every sleeping area.

This means every bedroom, sleeping porch, multifunctional guest room, or any other space in your home where someone might sack out (perhaps a cushy window seat?) should have a smoke detector.

A detector should be situated in a hallway if one or more bedroom doors open from the hallway.

Just one detector is necessary for this spot, whether the hallway serves one bedroom or three. The detector should be centrally located between the bedroom doors.

Install a detector in any room that lies on the path between a sleeping area and the closest exterior door.

While it’s not typically in the building code, installing smoke detectors along the exit route makes a home a little safer. For example, if a bedroom door opens into a hallway and to get outside from there, you’d have to go through a great room, put a detector in the great room. Any room you’ll pass through from the bedroom to the exterior door should have a detector.

RELATED: 13 Everyday Household Items You Had No Idea Are Flammable

Install at least one smoke detector on every level of your home.

While smoke detectors are vital in sleeping areas, most local codes dictate that you’ll need to put one on every floor, even if that floor has no bedrooms. This includes an unfinished basement.

To prevent false triggering of the smoke detectors, don’t install them too close to a stove or a steamy bathroom.

Nothing’s more frustrating than the smoke detectors beeping because someone burned the toast. The IRC recommends positioning smoke detectors a minimum distance away from stoves, ovens, and bathrooms, depending on the type of detector being installed.

To ensure that you get the correct minimum setback from a stove or oven, don’t measure from the top of the appliance up the wall. Instead, measure from the outer edge of the stove horizontally, and then install the smoke detector above that point. Heat and smoke both rise, so positioning a detector directly above a stove will lead to numerous false alarms.

The IRC serves as the minimum standard for safe construction, but many communities strengthen those codes with rules of their own. If your community has additional codes, in addition to the above guidelines, you may need to install detectors in rooms that have gas or wood-burning fireplaces, in laundry rooms, and other spots. Call your local building authority before installing a smoke detector system, and err on the side of caution—an extra detector is preferable to not enough.

RELATED: Google Nest Protect Review: Is This Smoke Detector Worth the Price?

Special smoke detector installation rules apply if you have a pitched roof.

Smoke rises, but believe it or not, jamming a smoke detector in the peak of a gabled, vaulted, or pitched ceiling isn’t a good idea. In fact, the NFPA has some specific rules regarding smoke detector placement in these conditions.

Install the smoke detector between 4 and 36 inches of the peak, where the two halves of the ceiling meet. This also includes walls that reach from the floor to angled ceilings. Installing it too close to the peak may cause malfunctions and installing it more than 36 inches from the peak may allow smoke to float by.

Note: If there are functioning skylights, it’s best to avoid installing the smoke detectors near them, as well.

Individual, standalone smoke detectors are better than nothing, but there are more effective ways to handle detection. Smart and interconnected smoke detectors can offer more information to the residents, resulting in improved safety and peace of mind.

Smart smoke detectors will typically report back to a hub or the home’s wireless internet, which will then send an alert to the homeowner’s phone or even to a security monitoring service. In some cases, activation of one detector will engage all of the detectors, creating a house-wide alert for residents. Many of these devices even have voice alerts that will call out the room and hazard.

Interconnected devices work by activating all of the home’s alarms at once, creating a house-wide alert. A smoke detector activation in the garage will activate the smoke detectors in the bedrooms, ensuring that the residents are awake and aware of the hazard. These systems can link to central monitoring as well.

Review how to test smoke detectors before deciding on where to place them in your home.

There are some considerations to keep in mind when determining where to install smoke detectors. Once the detector is on the wall, it will require battery changes and seasonal tests, and access can be an issue. This is especially true for stand-alone and interconnected smoke detectors, but may also apply to smart devices.

For stand-alone and interconnected detectors, testing and checking smoke detectors often requires activating a button on the side of the device itself. If you install the smoke detector at the very top of its installation range, testing could require a ladder. Installing a bit lower in its range from the ceiling may make them more accessible.

With smart devices, it may be possible to test them with a phone-based app. Do keep in mind that these devices will need recharging or battery replacements. The only exception would be those hardwired into the home’s alarm system, as 10-year sealed batteries aren’t readily available for these devices yet.

That’s a lot of information on smoke detector placement, but some of the details could still be a bit foggy. The following section includes answers to some of the most frequently asked questions about smoke detectors, their placements, and maintenance.

A smoke detector may operate for a long time, however, they’re only designed to be in service for 8 to 10 years. They may lose effectiveness beyond this point, so the US. Fire Administration strongly recommends replacing them every 10 years.

Q. How do smoke detectors work?

There are two types of smoke detectors: ionization and photoelectric.

Ionization detectors have a specific amount of ions within their detection unit. When smoke enters the detector, ions attach to the smoke. The sensor then notices the change in the volume of ions and activates.

Photoelectric detectors have laser-like beams inside. When smoke enters the detector, it blocks the beam and causes the device to activate.

Q. Where are smoke detectors required in a home?

Smoke alarm locations are ultimately a question for your local inspector, but the NFPA does require the following smoke detector installation locations:

Q. How often should you replace smoke detectors?

Smoke detectors are designed to work for 10 years. Beyond the 10-year mark, sensors may become less adept at detecting hazardous conditions. However, residents should replace any malfunctioning or visibly damaged smoke detectors right away, regardless of age.

Q. What kind of batteries do smoke detectors take?

How To: Install a Smoke Detector
Advertisement

The Best Smoke Detectors of 2022