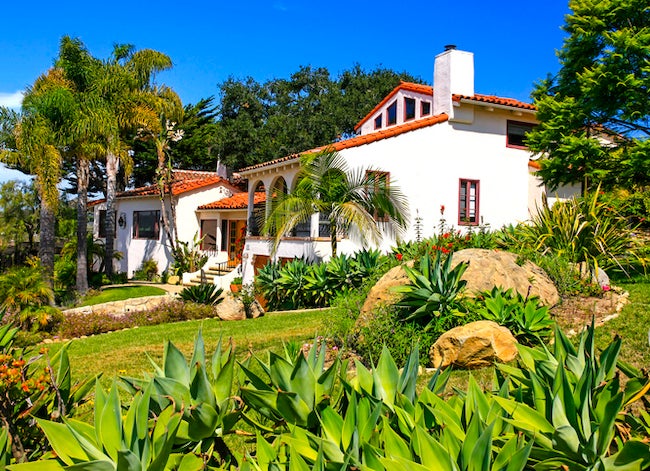 Hacienda style homes can create intrigue at just a glance. From their unique tile roofs to their romantic archways and thick adobe walls, there are many distinct features that make these Spanish style homes so special.

The hacienda style house originated during the Spanish colonization of America. Spanish settlers built these homesteads to serve as plantations for farming and producing goods. With the settlers choosing American climates similar to Spain and Mexico, like California, Arizona, New Mexico, and Florida, they were able to use familiar resources that were also available in their homeland, including adobe and red clay.

Though the Spanish Colonial period ended in the mid-1800s, hacienda homes have remained a major part of domestic architectural style. The following is a list of six distinguishing hacienda house characteristics.

One of the most recognizable characteristics of hacienda style homes are the low-pitched clay roof tiles. The tiles are handmade into the shape of half a tube, which works to absorb and release heat throughout the day. This feature is beneficial to keeping a home cooler in warm climates, which is where Spanish settlers were from and landed in the Americas during the colonization period.

Related: 10 California Ranch Homes to Give You Mid-Century Envy

Juxtaposing the rich red clay tiles of the roof on hacienda style homes are the bright white walls. Traditionally, hacienda style homes consisted of thick adobe walls finished with white stucco. Adobe was a readily available, sturdy, and long-lasting building option. The thick, white walls were ideal for retaining cool air during hot and sunny days. The walls also slowly release the sun’s warmth into a home at night when it’s cooler.

3. Hacienda homes usually have a courtyard with a fountain.

Hacienda style homes feature a courtyard that adds grandeur and outdoor privacy to a residence. Traditionally, the courtyard was placed in the center of the home to allow owners to cook indoors or outdoors. When temperatures were high, and any extra heat was unbearable.

Open-air cooking ensured some of the heat produced from the cooking process could be released without heating up the air inside the home. Today, the courtyard may also be found on the side or rear of the home. There is also likely a water feature in the courtyard, such as a fountain.

While many modern hacienda style homes may have large glass pane windows, traditionally, these homes featured simple small windows with spindles. Living in hot climates made for unique decision-making when constructing a home. Small windows allowed just enough breeze and light to enter the home while preventing direct sunlight from heating up the space.

Hacienda style homes are also characterized by their stunning exterior archways. The romantic architectural element is commonly used in haciendas’ outdoor hallways or courtyards. The style is a cornerstone for Mediterranean home design, implemented to promote openness and allow more natural light.

Related: 10 Charming Cape Cod Houses—From the East Coast and Beyond

10 Charming Cape Cod Houses—From the East Coast and Beyond