All You Need to Know About Tray Ceilings

Get the 411 on this trendy effect to see how tray ceilings can add impact to your favorite rooms. 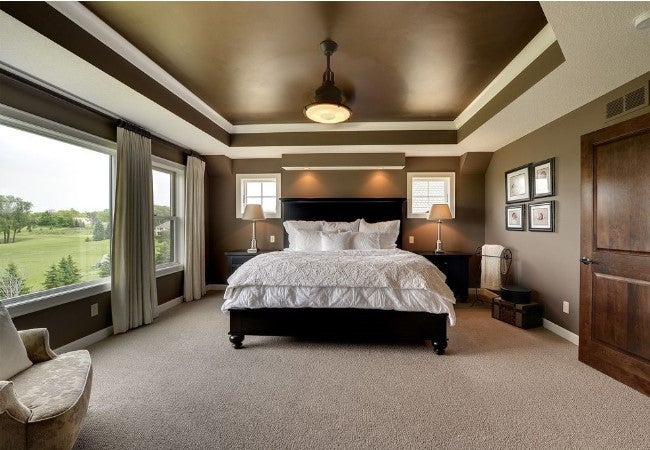 You may have hung the gallery walls and installed crown molding, but interior design needn’t stop at the top of the walls. A tray ceiling—also called an inverted or recessed ceiling—resembles a large upside-down tray set into a ceiling. The center section is situated several inches or feet higher than the perimeter, drawing the eye upward, adding visual interest, and creating a three-dimensional effect. A cousin to the coffered ceiling, which features multiple recessed areas in a grid pattern, a tray ceiling features only one recessed area but it can be an equally impressive focal point.

Simple and versatile, tray ceilings can complement virtually all styles of architecture and design. They impart a feeling of spaciousness to small rooms and add detail to the stark ceilings often found in expansive rooms. Because they’re frequently accompanied by ornate molding, contrasting colors, and special lighting effects, tray ceilings work well in open living areas, great rooms, and formal dining rooms where folks relax and linger—and can truly appreciate their appeal.

Keep reading to learn more about design choices, structural suitability, and construction methods to help you decide if a tray ceiling is right for your home.

The shape of a tray ceiling often follows the contour of the room, by means of a drop-down border around the perimeter of the ceiling. The inside tray recession can be anywhere from one inch to more than a foot deep, depending on the height of the ceiling and the desired effect the homeowner is going for. Because most rooms are square or rectangular, most tray ceilings are also square or rectangular, but there are no hard and fast design rules. Trays can be constructed in oval, circular, or other shapes if desired.

A tray ceiling can be functional as well as attractive. In older homes built before the advent of central heat and air, ducting is often run on one side of a ceiling when a vent system is later installed. This creates a bulk header on only one side of the room. As long as the ceiling is high enough (see “Overhead Space Concerns” below), a tray ceiling can be constructed to match the dimensions of the bulk header, camouflaging it in the overall tray ceiling design.

A tray ceiling can also house other mechanical elements in its drop-down border, such as wiring or plumbing. This is a good option in homes where it’s not feasible to route those elements through the walls.

Tray ceilings installed during the building of a new house are likely to be constructed within the ceiling joists. The border surrounding the tray should be the same height as the ceilings in the other rooms in the house, while the interior tray will be higher, so headspace will not be affected.

Style and Effect of Tray Ceilings

Standard tray ceilings are constructed from dimensional lumber (to form the drop-down border) and then wrapped with drywall. The drywall can be taped and finished without trim for a clean, minimalist look, or corner molding can be added to cover the seams where the drywall meets.

A tray ceiling can be as simple or as ornate as you like to suit the style of the room. Crown molding is often added inside of tray borders for classic elegance, and the larger the molding, the more dramatic the impact.

Color can play a significant role in tray ceiling style simply by painting the recessed ceiling one color and the drop-down border a contrasting or a complementary shade. Molding, if installed, can be painted to match the tray color or the ceiling color, or even a third color, if desired. The stylistic possibilities are limitless. To give your ceiling an elevated effect, try painting the drop-down border a light shade and the recessed tray a deeper shade. The deeper color adds depth and creates the illusion that the recessed tray is farther away.

Faking the Look of Tray Ceilings

Homeowners stuck with eight-foot ceilings can achieve a faux tray by installing flat trim molding on the ceiling in the shape of a traditional border. After the trim is in place, the ceiling on the outside of the trim can be painted a different color from the ceiling inside the border to create a visual separation.

The installation process for a tray ceiling differs, depending on whether the ceiling is constructed during the building of the home or a remodel.

All You Need to Know About Tin Ceilings

All You Need to Know About Vaulted Ceilings

All You Need to Know About Beadboard Ceilings