What Would Bob Do? Installing a Drop Ceiling

Although drop ceilings have a bit of a cringe factor, they can be useful for hiding that tangle of pipes and wiring that inhabits the upper reaches of the basement. If you're trying to fix up a downstairs space, a drop ceiling may be your best option. Read on for the installation basics. 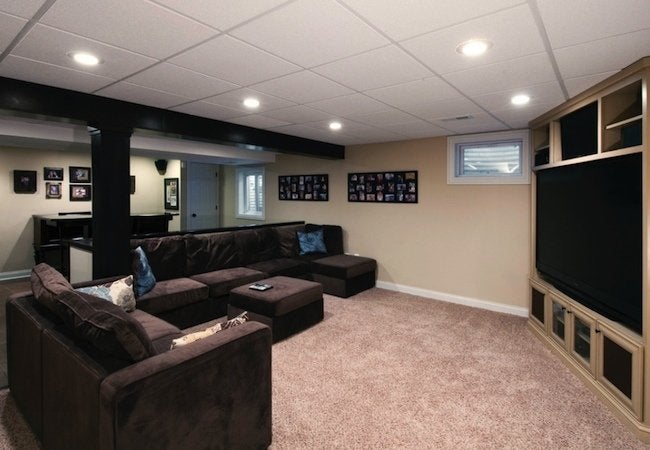 I’m interested in installing a drop ceiling in my basement rec room. Do you have any helpful hints for a do-it-yourselfer taking on this project for the first time?

A drop ceiling—also known as a suspended ceiling—conceals the plumbing or electrical work running overhead while allowing easy access to those elements in the future, should any adjustments or repairs become necessary. If you’re familiar with drop ceilings, then you are likely aware that some people dislike how they look. When the choice is between a drop ceiling and a messy warren of exposed mechanicals, however, homeowners often treat the former as a necessary evil.

We tend to think of ceilings as being solid and permanent, closely related to the structure of a home. But a drop ceiling isn’t that; rather, it’s a screen formed by a metal grid and the movable ceiling tiles placed into that framework. When it comes to the tiles, you have lots of choices. Countless textures and patterns are available, some even resembling tin or wood. In addition, many tiles feature soundproofing properties, valuable in a basement workshop or kid’s playroom.

It’s certainly possible to purchase the parts of a drop ceiling in an à la carte fashion, piece by piece—and you may wish to do so if you’re working in a compact utility space. But most of the time it’s cheaper to opt for the grid kits commonly available online and in local home improvement centers. Bear in mind that because one kit typically covers an eight-by-eight ceiling expanse, you’ll probably need to buy several if you’re trying to properly outfit an entire basement or a large garage space.

• Wall molding—L-shaped metal strips that run along the ceiling perimeter, supporting tiles on one edge

Installing a drop ceiling yourself? Rest assured that the process isn’t overly difficult, but for best results be sure to start with a detailed plan. If you’ve ever laid a floor, then you know the trick is to arrange the boards in such a way that you don’t end up with small, narrow pieces around the perimeter. The same principle applies here.

On graph paper, sketch the ceiling to scale. Include the location of any ceiling fixtures that need to be taken into account (for example, recessed lighting or ceiling fans). Continue sketching different arrangements until you strike upon one that allows for ceiling tiles with the widest possible diameter to go around the edge of the space.

Most ceiling tiles can be cut to size with a simple utility knife, if necessary. During installation, I recommend using a stepladder with an integral paint tray that can hold your tools and materials, saving you the hassle of repeatedly climbing up and down. Also, it’s wise to wear safety glasses; you’ll be directly below the action.

A parting thought: If all you’re looking to do is hide a cracked or stained ceiling—in other words, if there are no pipes, cables, or ducts to accommodate—then you may want to check out many of the direct-to-ceiling products on the market today. They don’t hang on a grid; instead, they install directly to the ceiling via adhesives, screws, or a combination of clips and tracks. In the right context, they can be real time- and effort-savers.

Advertisement
TAGS:
CEILINGS
HOW TO
INSTALLATION
More From Bob Vila

What Would Bob Do? Installing Beadboard
Advertisement