How To: Choose a High-Efficiency Mini-Split System

Anyone who's renovating or building new has to give a lot of thought to the best way of keeping those spaces warm in the winter and cool in summer. If you're looking for a system that offers exceptional versatility and efficiency, maybe it's time to learn more about an HVAC option that you may not have considered before. 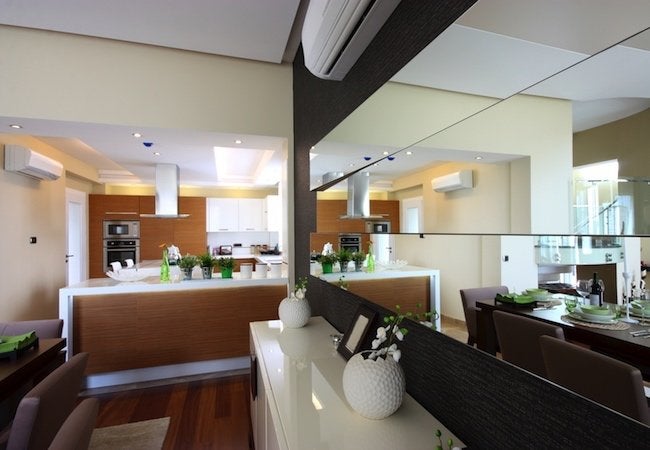 If you live in a mild climate, consider yourself lucky. Everyone else? You know that whenever the temperature soars or plummets, you always face an impossible dilemma: Either you commit to paying more than you may feel comfortable spending on your monthly energy bill, or you make the choice to shiver or sweat in the name of cost savings. It’s a lose-lose proposition that, in the age of whisper-quiet dishwashers and self-cleaning ovens, endlessly frustrates today’s homeowners, who are accustomed to appliances that deliver a considerably higher level of satisfaction. If you’re at your wit’s end with your current HVAC system, or if you’re planning a brand new custom home, take comfort from the fact that you can choose a heating and cooling system that won’t force you to constantly make sacrifices of one kind or another.

Forced air, the dominant mode of heating and cooling for much of the last century, may have surpassed older technologies, but it also reinforced the idea that you can enjoy comfort or save money, but never both. Only now are homeowners seeing a new way forward. Thanks to a recent wave of innovation—the rise of mini-split systems, most notably—the market finally includes options that manage to combine top performance with money-saving efficiency. Already common in Europe and Asia, mini-splits are still relatively rare in the United States. But with awareness spreading about alternatives to forced air, mini-splits are rapidly gaining popularity. For more background on the technology, and for details about the features that distinguish different systems, continue reading.

At the outset of an HVAC project, it’s important to define your needs, because mini-split systems—the iSeries from Unico, for example—offer a great deal of flexibility. You can employ the technology on your terms, adapting its capabilities to provide climate control in a space of any size, be it one small room or an entire multilevel home. The versatility of the system stems from its unique, streamlined design. At its simplest, a mini-split system consists of only two components—an outdoor compressor (to condition air) and an indoor evaporator (to distribute air). Here’s the key: A single outdoor unit can typically support multiple indoor units, and for even greater capacity, there’s the option of installing an additional compressor. The technology scales up or down as needed with ease.

Homeowners who install only one indoor unit often do so to add extra comfort in an area underserved by the main HVAC system. The technology can also provide whole-home climate control by dividing the home into HVAC zones, each of which gets its own thermostat. This allows the homeowner to target temperatures on a zone-by-zone basis. That may not sound like much, but consider that zoning lets you cut back on energy costs in any room you aren’t occupying. Second, in a zoned home, family members with different temperature preferences can all be comfortable at the same time in different rooms. It’s a win for your bottom line and your family’s comfort.

Mini-splits save you money in lots of little ways, but in the context of their high-efficiency performance, one innovation stands out most of all. Whereas traditional forced-air systems were designed to stop and start over and over in an energy-devouring cycle, mini-splits conserve by running continuously. That doesn’t mean the compressor operates at full capacity around the clock, but rather that it modulates itself to match the heating or cooling demand at any given time. In the process, the variable compressor driving the mini-split system goes a long way toward minimizing energy usage and maximizing savings. In fact, best-of-breed mini-splits often boast a Seasonal Energy Efficiency Ratio (SEER) high enough to qualify homeowners for any number of coveted certifications, including LEED and Net Zero Energy.

A second way in which mini-splits keep down costs: Because their installation doesn’t involve ductwork, mini-splits sidestep the air leakage and thermal energy loss for which air ducts are infamous. After replacing a traditional ducted forced-air system with a ductless mini-split, homeowners notice almost immediate reductions in their utility costs, sometimes up to 25 percent or more. The catch? Short runs of ducts often prove necessary in whole-home applications. Don’t fret, though: Just as so many other HVAC components have improved by leaps and bounds over the years, so, too, has one particular type of ductwork: a tubular, small diameter, high velocity (SDHV) system. The Unico System features small ducts encased in two layers of closed-cell insulation, effectively eliminating the risk of air leaks, energy loss, and wasted money. Plus, Unico’s iSeries outdoor unit can match up to Unico ductless and ducted systems at the same time. You can connect up to four indoor ductless units to one outdoor unit, or a combination of up to four ductless and ducted units to one outdoor unit.

HVAC isn’t known for its looks. Equipment manufacturers have usually focused on performance instead. It’s a different story, however, with mini-splits, largely because the system design situates the indoor unit within the space it conditions. Years ago, there was no other option but to mount the indoor unit right on the wall, but today manufacturers typically offer at least a couple of comparatively discreet alternatives. One popular style of indoor unit sets into the ceiling, leaving only its air distribution vents exposed. Another style slots into the floor or in a soffit. There’s only one problem: Not every home—and not every room in every home—has enough clearance in its cavities to accommodate a recessed HVAC component. In other words, it may be feasible to install your choice of indoor unit, or it may not.

Are you looking to knock out both heating and cooling in one punch? Many of the best mini-split systems are capable of delivering both. To cool a space, the technology pulls heat from the home and expels it outside. For heating, the system operates in reverse, drawing heat from the air surrounding the home and sending it indoors. In fact, the Unico iSeries has been tested and verified to operate at peak efficiency even when temperatures drop as low as -35 degrees Fahrenheit. When the seasons change, or on an unseasonably warm or cold day, switching modes requires nothing more complicated than the push of a button. Indeed, while homeowners are accustomed to viewing heating and cooling as separate and distinct, mini-splits serve as evidence that HVAC has changed—dramatically, and for the better.

Excelling where forced air fell short, mini-splits may be different enough from older technologies to warrant a reevaluation of everything you once took for granted about HVAC. That said, despite the evolution of climate-control technology, one thing remains as true today as it was 20 or even 50 years ago: Homeowners devote a great deal of thought, time, and effort (and, of course, money) toward shaping their homes to reflect their style sensibilities and priorities in life. Though any mini-split system can deliver the up-to-now elusive combination of comfort and savings, only the iSeries from Unico gives homeowners the option to operate both ductless and ducted systems from the same outdoor unit. This high efficiency solution means lower energy bills and a zoned home where everyone is more comfortable.

So, You Want to… Install a Mini-Split
Advertisement

How To: Upgrade Your HVAC—Without Giving Up Your Ducts

The Best Alternative to a Window Air Conditioner

AC Is No Sweat with a Mini-Split System

The Window AC Alternative You Need to Know About