How to Get Rid of Wasps: Say “Goodbye!” in 5 Easy Steps

Is your property overrun by the winged invaders? Here's how to banish wasps once and for all. 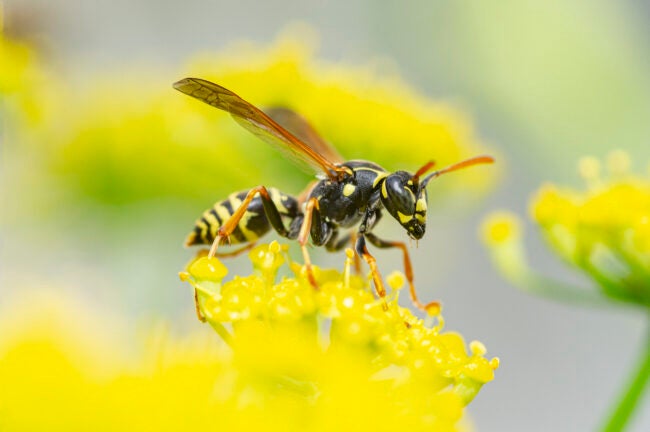 Spring and summer are lovely times of the year, but they do usher in a host of seasonal hazards, perhaps none more fearsome than wasps. Not only are wasps annoying, buzzing in your ears and hovering over your picnic, but they are also more likely than most bees to actually sting you.

To minimize the presence of these pests on your property, it’s important to destroy any wasp nests you come across. Although it’s not especially difficult or time-consuming to get rid of wasps in this way, you are going to need courage first and foremost, and like any soldier heading into battle, you’ll need to arm yourself with the right weapons.

Many potent (and oftentimes toxic) chemicals are sold commercially for the purpose of ridding homeowners of wasps, but we recommend handling the problem the old-fashioned way. Continue reading to learn how to get rid of wasp nests using little more than soap and hot water.

It’s important to know what you’re up against when preparing for wasp removal. Wasps, unlike bees, do not lose their stinger when they sting, which means they can sting over and over again.

Also, because they’re much more aggressive than bees, don’t expect wasps to let you stroll up to the nest unchallenged. To make matters worse, wasps release pheromones when they sting that alert other wasps in the area to the threat, so expect to face the wrath of any wasps in the vicinity as well as those in the nest. That’s why it’s only common sense to wear full protective gear and take all the precautions you can.

No, it’s not necessary to go out and buy a beekeeper’s suit, but it is prudent to cover up well. Wasps have long, straight stingers that can go right through lightweight clothing such as T-shirts, so dress in layers with clothes made of tightly woven fabric. Put on long pants, a long-sleeved shirt under a thick jacket, gloves, socks and shoes, and a hat paired with a bandana to cover your face. Don’t forget to tuck your pants into your socks! In short, cover up as much skin as possible.

If you haven’t done so already, the first step in getting rid of wasps is to locate the wasp nest. There are at least two strategies, one more sophisticated than the other. First, if you are able to distinguish the species of wasp that’s been hanging around your property (see below), you can then research its nesting habits. Some wasps prefer building their nests in trees, while others tend to build theirs in man-made structures. Knowing your enemy enables you to narrow the search range so you can find the nest more quickly. Alternatively, simply walk around your property, checking all those snug, out-of-the-way hiding places that wasps are known to haunt—roof eaves and rafters, wall cavities, crawl spaces, railings, fence posts, and tree branches.

If the location of the nest isn’t obvious, observe the wasps flying around your yard. Their flight patterns should show them going to and from one location. Tail the wasps until they lead you back to their nest.

Step 3: Identify the type of stinging insects you’re dealing with.

The best way to get rid of wasps is to know your enemy as well as possible. When you know which species you’re dealing with, you can maximize your odds of victory.

Yellow jackets have a telltale alternating black-and-yellow pattern that runs the length of their bodies, which typically measure about ½ inch long. Their spherical nests, which can reach the size of a basketball, are built from paper-like material. They nest in diverse locations, including high in trees and shrubs, near the ground in logs, or even underground.

Paper wasps are mostly dark brown in color with yellow and sometimes red markings. They can look very similar to yellow jackets, although paper wasps are much thinner around the “waist” and have orange-tipped antennae. Paper wasps get their name from their nests, which consist of a paper-like material. Their nests have a bulbous shape that resembles a paper lantern, and the honeycomb structure of the nest is often visible, which isn’t the case with yellow jacket nests. They are typically found hanging from the branches of trees or shrubs, but you can also find them attached to door frames, deck joists, eaves, and porch ceilings. Paper wasps aren’t as aggressive as other wasps and typically attack only if their nest is touched. Because they do help control other pests, their nests should be removed only if they are in close proximity to a structure.

The big difference between hornets and wasps is size. While wasps grow to about 1/2 inch long, hornets reach 3/4 of an inch. Bald-faced hornets and European hornets are the most common types in North America. The former are typically black with white markings, while the latter are brown with yellow stripes on the abdomen and a light-colored face.

Bald-faced hornets build large egg-shaped paper nests with compartments on the inside, typically high off the ground in trees or bushes, while European hornets usually build their paper nests in tree hollows, attics, wall voids, and other sheltered areas. In general, hornets typically build their nests, which can be quite large, reaching up to 24 inches in length, in elevated places, such as trees and overhangs on buildings. While both types of hornets help to control pests, both also pose a threat when living close to a structure.

Mud daubers have slender, delicate-looking bodies and are usually black with light-colored markings and a metallic sheen. Mud daubers do not live in colonies. Instead, the females typically build a nest of small 1-inch-long tubes from mud, which is how these wasps got their name. Their nests can usually be found under roof eaves or on porch ceilings, or in garages, sheds, barns, or even your house. Of the wasps on this list, mud daubers are the least threatening. They rarely sting humans, even when their nest is destroyed, and they kill numerous spiders, which they feed to their young. Many consider them a natural form of pest control.

Having properly equipped yourself for battle, you are now ready to choose the best way to get rid of wasps. Select one of the following battle plans:

Pouring a bucket of boiling water onto the wasp nest accomplishes two things: It immediately kills scores of wasps, and it ruins their nest. It may, however, take a few bucketfuls to destroy the nest and completely detach it from its hanging spot. Meanwhile, you’re likely to have upset dozens of stinging wasps. The wise course is to stage your attacks several hours (or even a full day) apart.

A second method—similar but slightly superior to the first—involves the addition of liquid dishwasher soap to the boiling water before you pour it on the nest. OK, why the soap? Because it bogs down the wasps, making it more difficult for them to counterattack. Again, it’s probably going to take you more than one bucket to destroy the nest, but with this method, you’re less likely to get stung in the process.

While home remedies are nice and inexpensive, sometimes it’s best to bring out the big guns. In this case, the big gun is a can of spray pesticide that will allow you to attack the nest from afar. The best wasp sprays unleash powerful wasp-killing pyrethroids and pyrethrins from a relatively safe distance of up to 27 feet away. These sprays work on contact, instantly killing the wasps with powerful neurotoxins. Sprays are especially useful when you’re dealing with nests that are under eaves, in tree branches, on porch ceilings, or in other hard-to-reach places where pouring boiling or soapy water just isn’t feasible.

Timing is everything with wasp removal. It’s best to approach the nest at night when most or all of the wasps are inside it. While it may seem counterintuitive to mount your attack when the wasps are “at home,” wasps pose less of a threat inside the nest than flying around it. Wasps are also less aggressive at night and have slower reaction times.

The time of year you attack is just as important as the time of day. Wasps pick a spot for their nest in early spring, then busily begin to expand it. By August, a nest can reach its peak size, housing up to 2,000 wasps. That’s a lot of stingers. With this in mind, it’s best to pay attention to wasp activity around your home in early spring. Nip the problem in the bud by eliminating recently established nests before they have a chance to become a buzzing wasp metropolis.

The best way to get rid of wasp nests is to kill as many wasps as possible in the first strike to eliminate, or at least weaken, a counterattack. With that in mind, a stealthy shock and awe attack is the best option. Don’t use a standard flashlight, which will alert the wasps to your presence. Instead, use an amber-colored light.

Plan an escape route so you can retreat to a safe area once any surviving wasps emerge from the nest looking for their attacker. Make sure there are no garden tools, lawn furniture, or toys in the way that might trip you as you make your escape.

Whether you’re using a spray, soapy water, or boiling water, the target is the same: You’ll want to hit the entrance of the nest and work your way out from there, covering the entire thing if there’s time. Don’t be shy with your attack. Douse the entire nest with whatever substance you’re using to kill the wasps. Your assault should last no longer than 15 seconds, after which you should make your escape.

FAQs About How to Get Rid of Wasp Nests

Q. How do you keep wasps away?

There are a number of strategies for preventing wasps from building a nest in your home.

Although there are a number of miscellaneous uses for dryer sheets, repelling wasps isn’t one of them. There is no proof that dryer sheets keep wasps away.

Q. What smell do wasps hate?

Wasps have a strong sense of smell, which allows them to locate food. Wasps do hate certain scents, including peppermint, lemongrass, vinegar, bay leaves, scented herbs, and essential oils.

Wasp sprays contain powerful pyrethroids and pyrethrins that will paralyze a wasp’s central nervous system on contact, causing it to suffocate and die.

Q. What are wasps attracted to?

Wasps are attracted to sweet foods, such as soda, fruit, fruit juice, and other foods with a high sugar content. Wasps are also attracted to foods that contain protein, including other insects as well as table scraps with meat or fish. You’ll also find wasps in flower gardens feasting on nectar.

While it’s certainly possible to eliminate a wasp nest on your own using the methods described above, sometimes it’s a job best left to the pros. If you or someone else in your household has a severe allergy to bee or wasp stings, it’s a good idea to call in a professional pest control service to handle the removal of a wasp nest. The pros know how to get rid of wasp nests safely, and they can put in place the necessary measures to prevent wasps from returning.

TAGS:
PESTS
HOW TO
MAINTENANCE
CLEANING
More From Bob Vila

How To: Get Rid of Every Carpet Stain
Advertisement

14 Things Never to Buy in Bulk

15 Things You Should Never, Ever Clean With Vinegar

13 Odd Predictions About the Future That People in Past Decades G...