How To: Prune a Tree

An occasional pruning will keep your trees healthy, safe, and pleasing to the eye. Follow these instructions on how to prune a tree to make sure that your cuts are effective and kind. 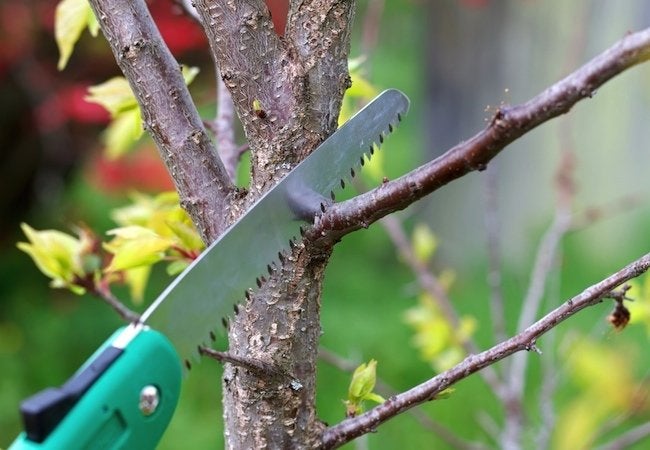 Sometimes a homeowner prunes a tree for aesthetic reasons, trying to keep the landscaping neat and tidy. Other times, tree pruning is a matter of safety—perhaps a branch has perilously crossed paths with a power line or grown too close to a window. The last but not least reason to prune a tree is for its own good.

There are many instances in which pruning goes a long way toward promoting tree health. Rather than calling in a service every time a tree on your property needs a bit of attention, you can learn the basics of tree pruning—it’s well within your capabilities!—and consequently save the considerable cost of hiring a professional.

Before you begin, look closely to identify the main branches that define the structure of the tree. Except in cases of severe damage, you should never remove these primary branches, because they are critical to the tree’s overall health. Another important rule of thumb: If possible, avoid pruning during the heart of the growing season; it’s better to wait until late fall, after the tree has dropped all its leaves. Also, to avoid shocking the tree, you shouldn’t trim off any more than a quarter of its crown during any one season.

The branches that are the likeliest candidates for trimming are those that have been damaged by storms. Choose a tool that’s appropriate given the size of the branch in question. Pruning shears work fine to remove slim branches, but for thicker growth, use a tree saw (failing that, reach for a simple handsaw).

Cut into the underside of the branch, no more than halfway through its diameter. Next, cut through the top side of the branch, being sure that your second cut aligns with your initial one. Severing the branch in two stages instead of one works to prevent the branch from tearing away part of the trunk.

Position your cuts at least a few inches from the trunk so that when you’ve finished, a protruding stub remains. It’s probably safe to reduce that stub somewhat, but do not disturb the stem collar, the thick growth that occurs where the branch met the trunk. It’s needed to help the tree heal.

For healthy growth, tree branches require the free flow of air on all sides. Dense patches of foliage leave the tree vulnerable to fungi that could eventually compromise its health. For that reason, it’s recommended that you thin out the very thickest parts of the crown, but you must do so in a specific way.

In general, the best branches to remove in the course of thinning are the ones growing toward the center of the tree. Using pruning shears, cut these branches on a bias, at a point just beyond where they fork away from parts of the tree that are more obviously growing in an outward direction.

Having removed all damaged branches and thinned out the overly dense sections of the tree, it’s time to consider pruning for purely elective, appearance-enhancing reasons. Don’t get too carried away. As mentioned, it’s bad for the tree if in a single season you trim more than a quarter of its crown. But if you identify any small branches that are sticking out too far or growing at unsightly angles, feel free to prune them.

All the while, bear in mind that every tree has a natural shape. It’s a mistake to try fighting against a tree’s innate tendencies. Instead, prune the tree in such a way that you are helping it assume the shape that it “wants” to take.

Solved! When is the Best Time to Trim Trees for Proper Maintenance?
Advertisement

The Dos and Don'ts of Pruning a Bush

9 Ways to Keep Your Outdoor Plants Safe During Storms

How To: Transplant a Tree

How to Prune Lilacs