Solved! Is There a Security Camera That Works Without Wi-Fi?

Wi-Fi security cameras used to be the new kid on the block, but now they are the easy, obvious choice in many cases. What’s left for those who’d rather have a more secure connection? 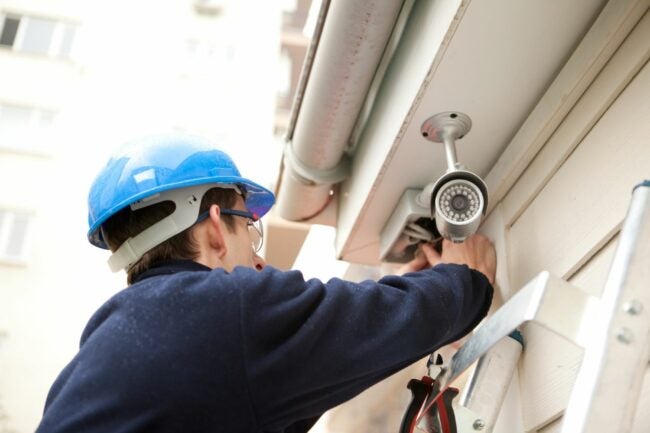 Q: There are so many security cameras on the market now, and with a slight rise in crime in my neighborhood I’d like to get one. However, my Wi-Fi is spotty on a good day, plus I’m not sure I know enough about securing my network against hackers. Are there security cameras that don’t require Wi-Fi?

A: DIY security cameras have taken the market by storm and enabled many homeowners and renters to feel safer in their homes. Traditional home security companies have also risen to the challenge, offering security packages that are a combination of DIY and professionally installed cameras and sensors. Wi-Fi has enabled this huge expansion of the security camera industry. Previously, all cameras (and most sensors, for that matter) had to be hard-wired into a home’s electrical and telephone system, through which the security system transmitted information. The cameras would connect to a video recorder; originally analog, then digital. This meant that the security system installation cost was high, and the process was labor-intensive and permanent.

With Wi-Fi transmission, cameras and sensors can be battery-powered or require a single electrical cable, and they can transmit messages and videos to the cloud or to a physical digital recorder without a web of wires spread across the walls. Users can install cameras anywhere they want to—indoors or outdoors—and change those locations as they see fit. The best home security systems have WiFi-integrated cameras as options, or they may even use them exclusively. Simple to DIY install, they are among the best apartment security systems as well, since the technology can move with the residents.

But not everyone has Wi-Fi, and some who do are concerned about the vulnerability of transferring video recordings of their home over the air, which is not an invalid concern. Although Wi-Fi can be secured, there’s no system that’s completely foolproof. Luckily, there are several types of security cameras that don’t use Wi-Fi. These cameras come in various sizes and functions. There are solid outdoor cameras that don’t need Wi-Fi, as well as smaller indoor house cameras that don’t need Wi-Fi and tuck almost invisibly into a shelf or mount atop a cabinet. The range allows users to fully customize their system; some might be primarily concerned with the exterior of the home and yard, while others may be looking to keep an eye on children home alone after school or elderly family members who may be at risk of falls or injuries and need immediate help. Especially for those situations, a faulty setup or offline router isn’t a workable situation.

Most of today’s security cameras require Wi-Fi, but some use cellular data instead.

One option for those who don’t have a Wi-Fi network in their home is to install security cameras that don’t need internet at all. Instead, users can choose a camera that uses cellular signals to transmit data. Initially, using cellular data was considered quite innovative as a solution for homes whose electric and telephone systems were unpredictable. While Wi-Fi’s popularity has pushed cellular connections aside, it’s still an option and is still offered as a backup plan for more traditional security systems that use landline telephone wires to connect. These cameras connect to a cellular phone with a data plan and record to a micro-SD card. Controllable through an app on the connected phone, cellular transmission is still technically hackable, but it’s much less vulnerable than standard Wi-Fi. Some cameras with cellular connection are completely wireless, while others need a power cord. Either way, they’re easy to install and reposition.

One thing to note about cellular connections: Video data is stored on a micro-SD card on the cellular phone, but the data has to get to the card over cellular airwaves. Essentially, this means that every time the camera is triggered to record video, it’s streaming a compressed movie through the cellular connection. Users of these systems will need a hefty data allowance on their cellular plan to accommodate this level of traffic without incurring large overage charges. For this reason, they may want to consider an unlimited data plan. To reduce data usage, these users may also consider adjusting the settings on the cameras to minimize recording length or resolution.

Other types of security cameras record onto local storage rather than using Wi-Fi to connect to an app.

Although cellular connection offers an alternative to Wi-Fi without adding wires to the equation, some people simply aren’t comfortable with over-the-air transmission and prefer the security of wired connections. There are a number of options available for security cameras that work without Wi-Fi. These cameras connect to a central hub or data recorder (usually a digital video recorder, or DVR—just like the one used to record television programs, but accessed through a computer interface where the video data is stored) and can hold data indefinitely until the storage capacity is reached. This method of recording is secure, and it’s not subject to the fickle strength of Wi-Fi or cellular signals. As long as a battery backup for the recording unit is in place, it will continue to work through a power outage. The best outdoor wireless security camera systems with DVR capability may be a realistic option for users concerned about privacy.

Closed-circuit and analog cameras transmit data through wires and store it on a digital video recorder.

Closed-circuit television (CCTV) cameras are what most businesses and security agencies use for surveillance, and these tend to be larger and bulkier than more streamlined wireless cameras. Video footage travels through coaxial cable to a series of monitors that security personnel can view in real time, while also storing the data on a DVR or network video recorder (NVR) for a time determined by the users. Analog cameras use the same technology, but they usually transmit directly to storage for viewing later, instead of in real time. The footage recorded by these kinds of cameras tends to be a little grainy, as the technology has, in many cases, moved on. A limited number of cameras are designed to produce HD-over-coax, which are high-definition videos with high, detailed resolution because the video is not compressed. This technology is still in development, as most HD cameras aren’t designed to work with coaxial cable. DVRs and NVRs that support wired cameras can be bulky, especially if their storage capacity is large, and the cameras that work with them also tend to be bulkier than more streamlined wireless or IP (internet protocol) cameras. They are, however, exceptionally difficult to hack into and provide the peace of mind that comes from being able to store footage as long as the user would like.

Internet Protocol cameras can use Ethernet or USB instead of Wi-Fi to connect to a video recorder.

Some cameras that work without Wi-Fi are designed to transfer video data over Ethernet or USB cables. These are essentially modernized versions of CCTV and analog surveillance cameras. These cameras may be more expensive than others, but they provide exceptionally clear and detailed recordings. They may connect to a DVR or NVR, or directly to a computer for viewing and storage.

Old phones can be turned into Wi-Fi-free security cameras that use cellular data.

Tapping into the glut of discarded cell phones many consumers have shoved in drawers, app designers have developed systems that allow an old cell phone to function as a security camera. By downloading the apps to both the old phone and the phone currently in use, users can designate one phone as a camera in the app, position it where they’d like to record, and make certain it has steady power. The current phone is designated as a monitor. These apps allow multiple phones to be connected as cameras and have a live feed for users to view. They can be set to detect motion and begin recording, and they offer other remote features that rival more traditional security cameras. These phones can work over Wi-Fi or cellular data, and they are a great, economical option in a home with Wi-Fi. However, each phone must be connected to the internet to work, so in a situation where there is no Wi-Fi, every phone connected to the app must have a cellular connection, which can be costly if that means that every phone must be registered with its own line. Such systems will also use a significant amount of data, so unless the user is on an unlimited plan, these costs can mount up.

A Wi-Fi-free security camera can work if there is no internet connection and may be more secure, but most customers choose Wi-Fi for convenience and ease of use.

So what security camera works without Wi-Fi? There are options. If the security of surveillance data is paramount, a CCTV, analog, or IP setup is by far the least-hackable type of security camera system. And for those with spotty Wi-Fi or cellular service, they may be the only option. Cellular service cameras are a solid choice as well, as it’s much harder for hackers to gain access to the data transmitted via that route. In most cases, however, Wi-Fi security cameras are easier to set up, less expensive, and provide excellent-quality video at a lower cost. Those worried about hackers can put extra energy into securing their home Wi-Fi network—a good idea anyway—with strong passwords and firewall software to protect from intrusion.

The Best Video Doorbells of 2023
Advertisement

The Best Wireless Doorbells of 2022

These Bugs Are Your Garden's Biggest Threat This Spring