Solved! Why Do I Have a Leaking Chimney, and How Do I Fix It?

A leaky chimney can put a huge damper on the enjoyment you get from your fireplace. Find out what causes a leaking chimney and who to call for repairs. 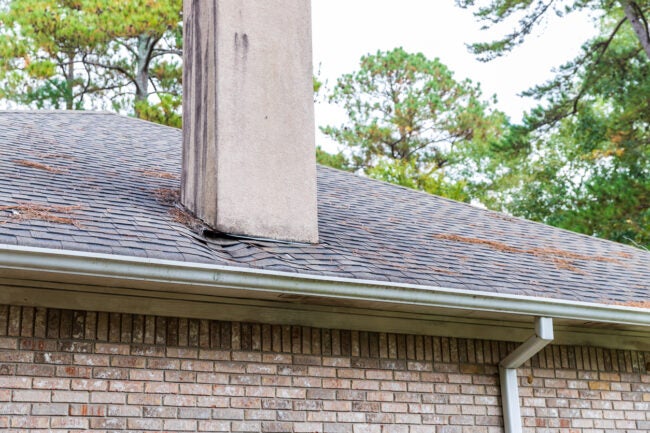 Q: We absolutely love our fireplace and use it all fall and winter long. But recently I have been noticing water in and around the fireplace. I think my chimney is leaking, but I have no idea what could have caused it. Why do I have a leaking chimney?

A: For many homeowners, a fireplace is a cozy gathering spot that makes the colder months a little more tolerable. But a chimney leaking threatens to ruin the ambience and even makes the fireplace temporarily unusable. If homeowners notice their chimney dripping water or moisture in the fireplace or the surrounding walls, a leaky chimney is almost certainly to blame. This is a repair homeowners will not want to delay—and not just because they will miss the roaring fire in their living room. More often than not, chimney leaks indicate additional water damage in the attic and surrounding walls. It’s essential to stop the leak as soon as possible and address any related damage before it gets too severe.

A chimney leak can be the result of a problem with the chimney itself or with the roof surrounding it. It might be unclear at first whether homeowners need to get in touch with a roofer or a chimney sweep. Read on to troubleshoot the likeliest causes of a leaking chimney and decide who to call for chimney repairs.

Leaking chimney?
Maybe it's time to call a chimney pro. Get free, no-commitment project estimates from services near you.
Find Pros Now

You may not have a cover on your chimney.

A functioning chimney should let smoke escape from the home but block water from getting  inside. One of the most important chimney features that supports this function is a chimney cover or chase cover. This is usually a piece of metal that fits over the opening of the chimney with a hole in the middle for the chimney cap. Most chase covers have a slight slope on each side so that water rolls off rather than collecting on a flat surface and leaking inside. A chimney without a cover is essentially a hole in the roof. There is nothing to block rain, snow, debris, or even critters from falling straight down into the fireplace.

The chimney cap or chase cover may be damaged.

Even the best chimney caps can eventually suffer from age and wear. Both the chimney cap and chase cover are usually made of metal, and they can break down from rust as they age. One or both of these features may need to be replaced if they are no longer watertight.

Damaged bricks or worn-out mortar may cause a chimney to leak.

As many people are aware, homes with brick exteriors need a certain amount of maintenance over the years to keep them from crumbling or succumbing to mildew. Brick chimneys are even more exposed to harsh weather conditions than siding, so they can be expected to wear out more quickly. Mortar may begin to crack, leaving gaps for water to enter, or the bricks themselves can start to crumble. It usually is not effective to simply caulk on top of worn-out mortar since the surface underneath is continuing to deteriorate. For a long-term fix, it will probably be necessary to have the chimney tuck-pointed (finishing the mortar joints with a narrow ridge of putty or mortar) and replace any severely damaged bricks. It’s also a good idea to have the chimney waterproofed after the other repairs are finished.

Flashing prevents moisture and debris from entering the roof—if it’s damaged, it could let water in.

Flashing is the material that roofers place on parts of the roof where water could seep into gaps—usually on corners, edges, or places where the roof meets a wall. Flashing is also installed around the base of a chimney. If this flashing is damaged or not installed correctly, it won’t create a shield against water or debris, which will result in the chimney leaking water.

Condensation building up inside the chimney could be leaking into the fireplace.

The source of moisture from a leaking chimney is not always rainwater—it may be building up from gas fireplace fumes. This is especially common when the fireplace has been converted from wood-burning to gas. Gas fireplaces emit a small amount of exhaust that can form condensation on the inside of the chimney. As long as the gas is being emitted, the chimney never has a chance to dry out, and the constant moisture will damage the chimney and even seep through to the surrounding walls over time. Luckily, this problem has a simple solution: installing a chimney liner to provide a barrier for the moisture and prevent chimney leaking inside and out.

If you’re noticing water in your fireplace, your attic is likely also suffering from water damage.

If there is water in the fireplace, the source is somewhere between the very top of the chimney and the hearth. More often than not, the leak will not just be contained inside the chimney, but it is also compromising other parts of the home as it travels downward. Water follows gravity, so a chimney water leak can affect any surfaces that come into the water’s path. If the roof’s flashing is to blame, the water will be leaking into the attic as well as down the chimney. Brick is also porous, so even an excess of moisture on the inside can leach out, making the surrounding walls damp. In addition to solving the source of the leak, it’s important to do a thorough inspection of the entire length of the chimney to determine if there is water damage in the attic or the walls that surround the chimney.

A roofer can fix damaged or missing flashing.

If the source of leaking around a chimney is determined to be the result of damaged flashing, a roofer is the best person to call, and quickly. Over time, even a small amount of water leakage whenever it rains can severely damage the roof, attic, and walls affected by the leak. Many homeowners do not visit their attics every day, so they may not see mold beginning to form or other effects of water damage. It’s also important to note that anywhere water can get inside, debris and small critters can, too. Rodents that travel along roofs won’t hesitate to make the attic their home if they can find even a small entrance.

Additionally, if all of the roof’s flashing was installed at the same time, the chimney may not be the only part of the home that is vulnerable to leaks. The rest of the flashing is also old and will likely need to be replaced soon. It’s advisable to stop this problem in its tracks before it becomes more severe, and more costly.

A chimney sweep can inspect and repair any issues with the chimney itself.

For most leaks in a chimney, it’s best to call a chimney sweep right away to make repairs, even if it’s unclear exactly what they will be. Chimney sweeps know exactly what problems to look for, including condensation, rusted caps or covers, or damaged masonry. Homeowners may be tempted to make small repairs themselves to save on the cost of hiring a chimney sweep. But between the safety risks of getting on the roof and the possibility of prolonging or worsening the problem with improper repairs, it’s well worth it to leave this job to the professionals. Chimney repair is not a DIY project, so getting in touch with a chimney sweep is the most efficient way to get the chimney back to safe, working order.

It’s recommended to get your chimney cleaned and inspected at least once a year.

Even if the chimney seems to be operating just fine, it’s recommended to schedule regular maintenance to have it cleaned and inspected at least once a year. For homeowners that use their fireplaces often, it’s wise to schedule more frequent service.

Fireplaces are a cozy feature to have in a home, but they are only safe if they are well maintained. Homeowners should not discount the risk of smoke or carbon monoxide exposure if buildup blocks the chimney. Scheduling regular inspections and cleaning will ensure the fireplace is safe to use as well as prevent the need for massive repairs down the road.

How Much Does Chimney Repair Cost?
Advertisement

11 Things Never to Keep in Your Bedroom

8 "Must Have" Tools for Home Improvement

Here's Why Every Bathroom Could Benefit from a Ventilation Fan