How Much Does a Chimney Cap Cost to Install?

Chimney caps protect your chimney and keep your indoor temperature stable. Chimney cap cost ranges from $75 to $1,000, with an average cost of $300. 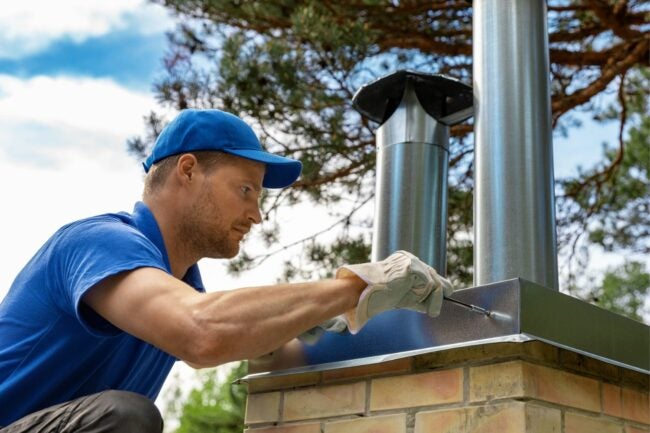 There are a lot of working parts and pieces in a chimney system, each one important in keeping a home safe and warm. A chimney cap is installed on top of a chimney to keep moisture out and warm air in. How much does a chimney cap cost? According to Angi and HomeAdvisor, chimney cap replacement cost is anywhere from $75 to $1,000, with a national average of $300.

Chimney caps can be made from a range of metals, including galvanized steel, aluminum, stainless steel, and copper. Each one offers a different level of durability and curb appeal. Galvanized steel and aluminum are the most cost-efficient options at $25 to $200 and $40 to $400, respectively. Stainless steel is a little better quality and therefore costs a bit more at $50 to $500 per cap. Copper is the most expensive at $200 to $800 due to its impressive durability and aesthetic value.

The type of chimney on a home also plays a role in the overall chimney cap replacement cost. Most chimneys tend to be made out of masonry—standard chimney caps work in this application. If a chimney is made from metal, an intricate type of stone, or another material, however, the chimney cap may have to be custom-made, which will end up costing more. Additionally, if the chimney has multiple flues, is an unusual shape, or has any other unique characteristics, the cost of the chimney cap will be much more than the average range.

In addition to the cost of the cap itself, homeowners can expect to pay a chimney cap installation cost of $100 to $200, depending on the labor rates in their area and the complexity of the job. If the chimney has multiple flues or masonry work is required in addition to the cap replacement, the labor cost will increase. Labor costs will also be more if the homeowner is replacing the chimney cap versus just installing a new one, because the professional will need to remove the old cap first.

Need chimney cap replacement?
Maybe it's time to call a pro. Get free, no-commitment project estimates from services near you.
Find Pros Now

In some cases, a chimney might require additional prep work, including cleaning or preparing the surface, before the chimney cap can be installed. A chimney sweep costs between $129 and $378 on average, so homeowners can factor in this cost if they expect cleaning to be a requirement. Additional prep work can be avoided by employing the best chimney cleaning services to sweep the chimney annually and inspect it to be sure it’s in good condition.

Homeowners can look into installing a chimney cap in the spring or fall for the best pricing. In the winter, the conditions for installing the cap on a roof can be a little more dangerous. The added time and effort to climb and work on a roof in the winter will typically increase the project price. In the summer, a roof could be too hot to work on without damaging the shingles or membranes, so again, the added precautions can add to the overall cost.

How much is it to cap a chimney? In addition to the cost factors listed above, homeowners will want to look into how the following considerations might affect a project. Custom chimney caps and full chimney cap replacements will add to the total cost.

In some cases, a homeowner might choose to repair their chimney cap instead of replacing it. The chimney cap must be in decent shape to warrant just a repair. Usually, minor dents and cracks can be repaired. A chimney cap repair costs between $100 and $250. If the material has rusted or the cap is deformed from weather and age, it must be replaced. It will cost $300 to $600 to replace an old chimney cap.

Depending on local building codes, a building permit might be required to replace a chimney cap. If a permit is required, a code enforcer will review the project plans and ensure they are up to code. A building permit usually costs between $100 and $600, usually on the lower end for this type of project, and is well worth the expense to ensure the project is done right.

Chimney caps can be simple, ornamental, or anything in between. If you want a cap that is more decorative to fit with your home’s current aesthetic, expect to pay $400 to $800. There are a variety of decorative chimney caps available, from swooped style to a bishop’s arch. Any customization that is above and beyond a standard chimney cap will add to the total cost.

How much is a chimney cap? That depends on the material it is made from. Chimney caps are typically made from galvanized steel, aluminum, stainless steel, or copper. Each material has its pros, cons, and associated costs not including labor.

Stainless steel chimney cap cost ranges from $50 to $500. These chimney caps are a bit more durable and long-lasting than aluminum and galvanized steel. For this reason, they are usually most often recommended by professionals. Some stainless steel chimney caps come with a lifetime guarantee, but on average homeowners can expect them to last about 10 years total. This is the shiniest of all the metals with the highest level of durability.

Not sure what type of chimney cap you need?
Maybe it's time to call a chimney pro. Get free, no-commitment project estimates from services near you.
Find Pros Now

Copper chimney caps, the most expensive at $200 to $800 each, are considered the best type of chimney cap to install for a number of reasons. The material is very durable and will withstand the elements. Additionally, the copper color can add an aesthetic touch as it gains patina over time. Similar to stainless steel chimney caps, copper caps often come with a lifetime warranty.

The investment in a quality chimney cap is almost always worth it due to the benefits. A properly installed chimney cap will protect a chimney and help maintain the warm temperature inside a home.

A home’s energy efficiency increases when downdrafts—cold gusts of wind—are blocked by a chimney cap.Chimney caps prevent downdrafts from entering the home and help to keep the indoor temperature stable.

Chimney caps prevent fires by controlling sparks that may occur inside the chimney. If any of these sparks escape the chimney, they can easily start grass or brush fires. A chimney cap also prevents embers from exiting the chimney and potentially causing a roof fire.

A chimney without a cap is exposed to lots of water from rainfall. This excess moisture can damage the chimney’s liner, dampers, and mortar joints. The best chimney caps for rain prevent precipitation from entering a chimney. Instead, the rain is diverted, down the roof to the gutters. The cap reduces the risk of moisture-related damage to a chimney.

Animals looking for a safe place to call home, especially during the colder months, might just find it inside a chimney. Unwanted animals in a chimney can prevent smoke from exiting the flue, causing smoke damage or even carbon monoxide poisoning. From birds and bats to squirrels and other varmints, a chimney cap will cut off access so these pesky critters can’t come inside, which means the homeowner won’t be frantically searching “how to get birds out of a chimney” in the middle of the night.

A chimney usually has a liner down the interior walls that protect the structure and reduce fire hazards. The lining can be clay, ceramic, or metal. A chimney cap helps to extend the life of a chimney liner by reducing the amount of water and debris that enters a chimney. The less a chimney liner is exposed to moisture, the longer it is likely to last.

For safety reasons, it is highly recommended that homeowners hire a professional to install a chimney cap. An expert will know precautions to take how to properly and safely access the chimney and the correct height and placement for the chimney cap installation. During the installation homeowners can also request an inspection of their chimney and a recommendation on other repairs. The process should take only a couple of hours for a professional to complete and will give homeowners extra peace of mind knowing that their chimney cap has been correctly installed.

Chimney cap replacement is no DIY job
Get free, no-commitment project estimates from chimney pros near you.
Find Pros Now

How to Save Money on Chimney Cap Cost

Before hiring a chimney professional to install a chimney cap, homeowners will want to make sure they are hiring someone who is qualified to do the job. Ask these important questions to help ensure a quality installation.

Homeowners may have questions about chimney cap installation cost before they decide to replace or repair theirs. The following are some of the most frequently asked questions that will supplement homeowners’ research and set up their project for success.

Q. Is a chimney cap necessary?

A chimney can work properly without a cap, but having one will help a chimney last longer and perform better. Chimney caps keep moisture and debris out of a chimney and keep embers that can cause fires inside the chimney. They also help prevent downdrafts that interfere with heating a home.

Q. How tall should a chimney cap be?

A chimney cap should be at least 8 inches taller than the chimney flue—more than 8 inches is ideal. This allows enough of a gap so the chimney smoke still exhausts properly while rain, snow, and other items are kept out.

Yes, chimney caps do keep rain out of chimneys. Rain falls off the top of the chimney cap onto the roof and into the gutter or drainage system rather than getting inside the chimney flue. This protects the inside of a chimney from moisture-related damage.

Q. Can I install a chimney cap myself?

It is possible for homeowners to install a chimney cap themselves; however, most homeowners choose to hire a chimney expert for the job. Working on top of a roof can be dangerous without the correct equipment and training. Additionally, an improper chimney cap installation can increase the risk of chimney fires.

Q. How long does a chimney cap last?

A chimney cap can last for several years depending on the material and weather conditions. In most cases, a chimney cap will last for 5 to 10 years, but it could last even longer.

Q. How do I know if I need a new chimney cap?

There are several ways homeowners can determine whether their home needs a new chimney cap, including the following:

How Much Does a Chimney Inspection Cost?

The Best Chimney Caps for Rain of 2022

5 Upgrades to Consider When Re-Roofing Your Home