Is There a Bird Trapped in Your Chimney? Here’s What to Do.

Follow these easy tips to help the wayward bird that's trapped in your chimney back into the wild. 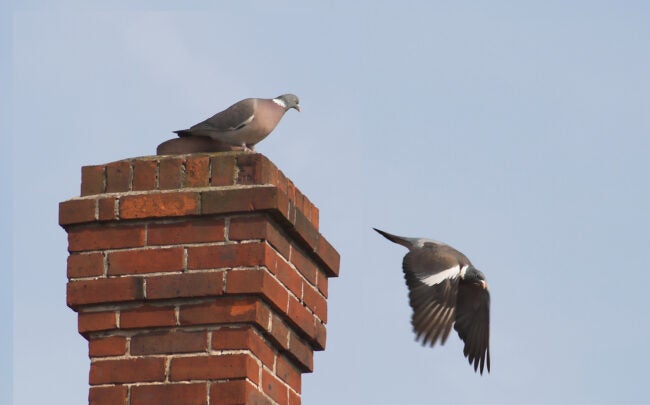 Aside from the occasional raven named Nevermore tapping at the chamber door, birds rarely seek entry into a house. When a feathered friend does find its way in, it’s usually by accident, and one of the most common points of entry is the fireplace chimney. If left unprotected, a chimney can look like a perfect nesting spot to a bird. Once inside, there’s usually not enough room for a bird to flex its wings wide enough to fly out. That’s when you need to step in and help the bird safely return to the wild. Wondering how to get birds out of your chimney? The process is pretty easy.

To safely transport the bird outside, you’ll need to catch it first. Since you should never touch a bird with your bare hands, you’ll need to use a cardboard box to catch the bird if it’s in the chimney or a towel if it’s in the fireplace. If you’re using a box, make sure you have a sheet of cardboard that is large enough to cover the box’s opening and a flashlight to attract the bird.

If your fireplace is in a living area with open entryways, you’ll also need some bedsheets and thumbtacks to contain the bird in the room. It’s also a good idea to have a broom on hand to direct the bird out a window or door if it escapes the fireplace.

Position the box so that it fits into the chimney with no gaps that could allow the bird to fly around the box and into the room. Use the fireplace grate or another box to prop the box high enough to reach the chimney.

Birds are frightened by sound. To coax your feathered intruder into the box, you’ll need to silence any noise in the room. Turn off the television, lower any music, and move children to another part of the house. Stick around, though, as you’ll need to act quickly to trap the bird once it flies into the box. Listen for the bird to fly to the light and into the box.

Once you hear the bird enter the box, slowly move to the fireplace. Carefully slide the sheet of cardboard over the top of the box, trapping the bird inside. Calmly remove the box and take it outside. It’s important to transport the box slowly to prevent the bird from panicking and potentially injuring itself. Once outdoors, open the top and set the bird free.

Trapping a Bird in the Fireplace

If the bird is already in the fireplace, close all doors to the room to prevent the bird from reaching other parts of the house. If the living area does not have doors, close off the entryways by hanging bedsheets using thumbtacks. Open a window (and remove the screen, if one is present), or open an exterior door.

Wrap the Bird in a Towel

Holding a bath towel, slowly approach the bird. When you’re close enough, gently toss the towel over the bird. Lift the bird while holding the towel around it, and carry it outside. Once outside, unwrap the bird and allow it to fly away.

If the bird escapes into the room as you approach it, use the broom to guide it toward either the open door or window. If it’s nighttime, turn on any exterior lights to attract the bird to the door or window.

Once the bird has escaped back to the wild, make plans to install a screen on the top of your chimney so birds will enter your chimney nevermore.

How to Make Your Windows Bird-Safe: 11 Smart Solutions
Advertisement

11 Weather Vanes to Point You in the Right Direction

No Ultimate Workshop Is Complete Without These Tools and Accessories

Window Boxes That Raise the Bar