How To: Get Rid of Moles

All summer long, you've put hard work into maintaining a lush lawn. Don't let it go to waste! If you see signs that moles are wreaking havoc with your lawn, save yourself a migraine by trying these methods to remove the disruptive underground pests from your yard. 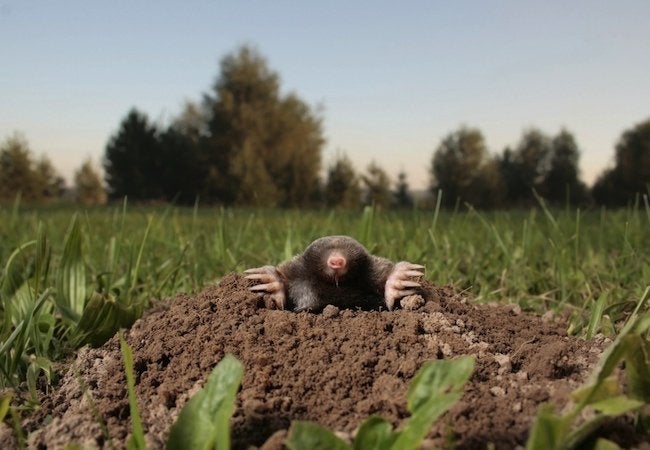 There’s no mistaking when a mole or two have invaded your lawn and garden. Though you’re not likely to see one above ground, the hills and ruts a mole leaves in its burrowing wake can spoil, if not devastate, your landscaping. Beyond the eyesore of new mounds sprinkled throughout your lawn, the tunneling can separate roots from soil, killing grass and other vegetation.

If you’ve been researching the topic of how to get rid of moles, then you’ve probably come across scores of reports, each touting this or that method as being the best solution to a mole problem. It might be worth trying one or some of those recommendations, but many experts agree that trapping remains the only reliably effective means of stopping these creatures.

First, the bad news: If you were hoping there’d be a way to get rid of moles without getting your hands dirty, it’s time to either modify your expectations or call in a professional (which I highly recommend). Trapping is not only somewhat labor-intensive, but it’s also going to bring you up close and personal with at least one mole. If you’re squeamish about such things, your best bet is to hire the job out to an experienced exterminator in your area.

If you’re used to dealing with animals—or if the damage caused by the moles has driven to you a point of frustration-induced courage—then you’re ready to get to work. Basically, there are two options: You can try to catch a mole in the act, so to speak, or you can set out a series of mechanized traps. The former is the more humane approach, because it doesn’t require killing the mole. The latter is more likely to produce results, but the mole may die in the clutches of your trap.

Here’s the prevailing wisdom on how to catch a mole and keep it alive. It turns out that things haven’t changed much since Caddyshack, in which Bill Murray portrayed a hapless groundskeeper obsessed with getting rid of the moles terrorizing the local country-club golf course.

Now that you’ve isolated the mole, dig it out from its tunnel, transfer it to a cardboard box, and take it to a field far away from your property. Repeat the process until you’ve relocated all the offending moles.

Purchase mole traps online or at your local home center. Mole-weary homeowners report success with spring-loaded snares like Victor Easy Set Gopher Traps (view on Amazon). Place yours directly into the mole’s tunnel, being sure to choose an active tunnel. If you’re not sure of a given tunnel’s status, cover over the nearest molehill. Wait a day or two, and if the molehill has been uncovered, that’s a pretty clear indication of activity.

Once you’ve set the mole trap, check it often. Also, remember that catching one mole doesn’t mean the problem’s behind you. You’ll need to set the trap again and again, because additional moles may decide to occupy the initial one’s pre-established tunnels. Indeed, several moles may need to be trapped before the tunnel goes dormant. Finally, know that it may not be legal in your state to set a trap that kills moles. Check with your local authorities.

Until you’re rid of the pesky critters, know that it can be OK and even beneficial to live with your underground neighbors for the time being. Their quick digging actually aerates your yard and circulates nutrients in the soil. Plus, a mole’s diet of  grubs and other insects could get rid of pests that would otherwise eat at the roots of your plants.

While you’re cohabiting, just follow a little bit of maintenance to be sure their shallow tunnels don’t completely disrupt the roots of your plants: Press any raised soil back into place with your foot, and water thoroughly so that the roots do not dry out.

To discourage moles in the future, cut back on the watering in your lawn-care routine, and maybe even consider choosing a grass that can survive on less water. The drier soil will attract fewer earthworms and thus minimize your chances of tempting a mole to move in and chow down.

TAGS:
PESTS
HOW TO
MAINTENANCE
More From Bob Vila

How To: Get Rid of Every Carpet Stain

If Your Home Smells Funny, Check These 12 Problem Areas

10 Things You Didn't Know Windex Can Do