How to Get Rid of Gophers

Don’t let a gopher get the best of you or your backyard! Learn how to get rid of gophers and keep them away with several simple solutions. 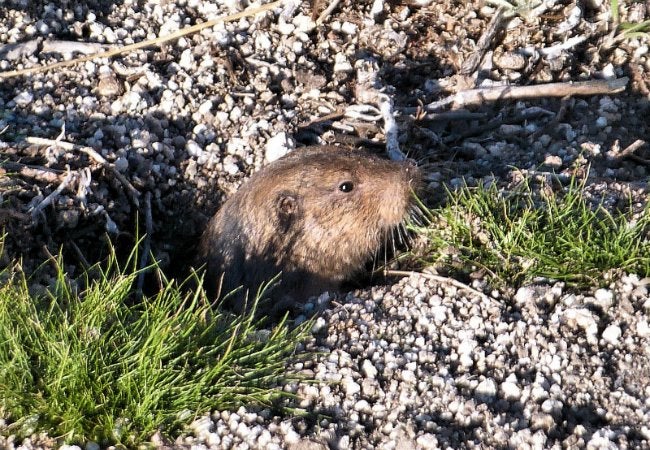 Even if you’re not an avid cultivator of prized begonias or caretaker of an expensive golf course like Bill Murray’s character in Caddyshack, having a gopher in your yard can still put a damper on your lush landscape. While these small, vegetarian, half-blind rodents seem fairly harmless, they didn’t earn their pest classification just by disrupting a little soil.

Gophers are very territorial and solitary, so you’ll rarely get more than one critter per acre. But even the one can do a fair amount of damage. He can dig up 10 to 30 mounds of dirt in your yard every month, eating through roots, vegetables, stems, and just about anything else in its underground path, edible or not. That includes tree roots and utility lines—both with the potential to cause a lot of damage.

Gophers’ network of tunnels create sinkholes in your yard that are as potentially dangerous for pedestrians as they are unsightly. Gophers also spell trouble for other animals, since, like all wild rodents, gophers tend to carry lice, fleas, ticks, and mites, often passing those along to pets who spend time in your yard.

The presence of a gopher can encourage other unwanted guests—predators like weasels, skunks, and snakes—to visit your yard looking for a quick meal.

The best thing to do is act swiftly, using one of the following three methods:

Live traps (as well as poison traps, which are detailed below) are non-labor-intensive ways to effectively remove a gopher from your lawn. Besides being one of the least involved methods, trapping also ranks as one of the most effective way to get rid of gophers or other rodent intruders. You can pick up a live trap at your local hardware store or even online (view example on Amazon). Place the trap near the entrance of the burrow, with or without some lettuce or peanut butter inside (alas, experts aren’t convinced that baiting the trap significantly increases your chances of trapping the little varmints). Once a gopher has been caught, you will need to fill the tunnels and repair the holes to discourage new gophers from moving into their vacated burrows.

For a similarly humane removal method, consider sending the gophers packing on their own using repellent. First, plan an exit route you hope they follow out and away from your property. Then, place castor oil pellets, peppermint oil, or fabric softener sheets in the burrows nearest your house to start.

One or two days later, place additional repellent in burrows further out—and closer to your desired exit point at the far edge of your yard. This will push the gophers away from the source and out.

Gophers may also be turned off by pet waste or fish scraps placed in their tunnels, if you’d prefer to use waste you have on hand.

The major downside to rodent repellents is that they likely won’t drive gophers far enough away. If you have close neighbors, you can guess where the rodents might move next.

Disguised as a tasty grain to attract gophers and other outdoor rodents, poisonous gopher bait often utilizes a toxic chemical like zinc phosphide. Homeowners report success with products from manufacturers like JT Eaton and Bonide. (Avoid any that list strychnine on the label as an active ingredient, because this poison remains in the gopher’s system and may poison any predator who feasts on a poisoned gopher’s remains.)

Follow the instructions printed on the bait packaging very carefully, depositing the appropriate amount at the burrow entrance, using a dispenser probe. While poison is easy and efficient to administer, it does cause potential hazard to pets and children; consider this method carefully before placing them on your property as a means for how to get rid of gophers.

Though it sometimes get the job done, flooding gopher tunnels with water harms the lawn and doesn’t guarantee success. Water simply loosens the dirt, making your land easier to tunnel through. Until the water recedes, the gopher can easily retreat to higher ground.

More ideas that aren’t worth the time effort: Fumigating (smoking gophers out with the exhaust from a lawn mower or blower) or blowing up the holes. Aside from being downright dangerous, these methods will cause more harm to your lawn than even the most active gopher. Often, gophers will seal themselves in a tunnel and wait out the fumes anyway.

After attempting one of the extermination methods described above, check to see if the gophers have packed up and moved on by poking a hole into one of the burrows. If after a few days the hole stays open, your guests are gone!

Your work isn’t quite over, though: Once they’ve left, make sure they’re gone for good with a few precautionary measures.

This trifecta—repellent plants, a trench, and an emitter—can ensure your unwelcome guests don’t return, leaving your yard low-maintenance and critter-free!

TAGS:
HOW TO
PESTS
MAINTENANCE
More From Bob Vila

Gopher vs. Groundhog: Which Burrowing Critter Is Invading Your La...
Advertisement

How To: Get Rid of Thrips

How to Get Rid of Aphids

10 Plants to Grow for a Pest-Proof Yard

Mosquitoes Are the Worst in These Parts of the Country