How To Get Rid of Hornets Safely and Effectively

While they aren’t as aggressive as some other stinging insects, hornets are still the bane of many a warm-weather picnic or barbecue. These steps will help homeowners remove these unwanted guests. 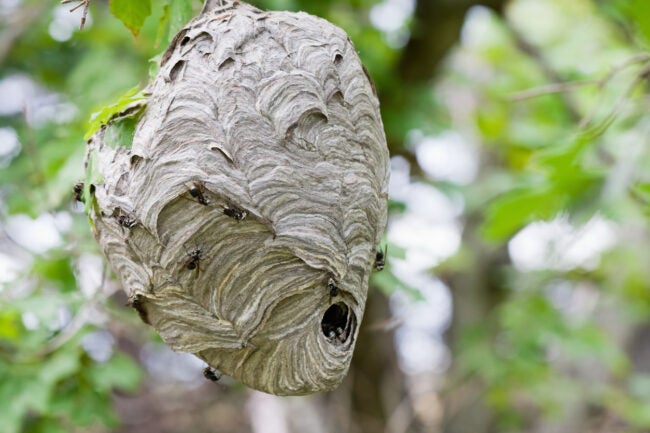 Hornets are a vital part of any garden ecosystem, but that doesn’t mean they are welcome buzzing around the patio or inside the home. Hornets are flying, stinging insects that are slightly larger than paper wasps or yellow jackets, and unlike bees, they can sting more than once. While a hornet sting is generally not dangerous (unless you’re stung many times or have an allergy), it is painful—hornets release more venom per sting than any other stinging insect.

These insects provide some benefits to the garden: They are carnivores and eat aphids, flies, and other insects that can damage plants. However, they are generally aggressive when they feel threatened and are particularly attracted to locations where sweet-scented food, drinks, and trash may linger—in other words, they love outdoor eating spaces. Taking steps to discourage the development of nests and killing or removing them when they take up residence too close to the home is the safest option.

Time required: 30 minutes, plus a recheck the next day
Difficulty: Beginner
Estimated cost: $5 to $20 for a can of hornet spray, and between $100 and $1,300 for professional nest removal

Hornets do not want to be disturbed, and it doesn’t take much for them to become defensive and angry if they are threatened. According to Zachary Smith, president of Smith’s Pest Management and California-licensed pest control professional, “Any person or animal that approaches a hornet’s nest can raise alarm with the hornets within, especially if this person or animal comes into contact with the hive itself.”

Consider all the options before starting—don’t just grab a can of insecticide and begin spraying midday, because hornets will swarm. Worker hornets who sense danger in the hive use a complex communication system to defend their territory. Smith elaborates, “These workers communicate with each other through pheromones—chemicals released in the air that many insects use to communicate with each other. If [the hornets are] threatened, the pheromones spread through the hive like a chain reaction: Each worker detects the alarm pheromones and simultaneously begins to emit the same pheromone. The message passes quickly throughout the hive [and] they all come swarming out at once.” For large nests in particular, contacting one of the best pest control services such as Orkin or Terminix to remove the nest may be the smartest choice. Professionals know precisely how to get rid of hornets in a safe manner.

Are They Hornets, Yellow Jackets, Wasps, or Bees?

Before choosing a course of action, homeowners should identify the type of stinging insect they have. The answer to how to get rid of wasps may be different than the method used for bees or hornets. Hornets and yellow jackets tend to be the most aggressive, so homeowners should take extra caution when dealing with them. Here’s how to tell the difference between hornets and wasps as well as other types of stinging insects.

Hornets at home?
Maybe it's time to call in a pro. Get free, no-commitment estimates from exterminators near you.
Find a Pro

Tips for How to Get Rid of Hornets

Hornets are social beings, so if there are several hanging around, it’s likely there’s a nest nearby. Their nests are distinctive. Every wasp nest is papery, but a hornet’s nest is shaped like an upside-down teardrop and has a small circular opening at the bottom where the hornets enter and exit. Homeowners who are unsure what they’re looking at and need a visual can search online for “hornet nest vs. wasp nest.” Up to 1,000 hornets can share the space in a large nest, so it’s ideal to locate and remove nests when they’re small. Unlike other stinging insects, however, hornets prefer to tuck their nests into secure locations: deep in a tree or shrub, tucked into a crevice in a building, in a rotting tree stump, or protected by the eaves of a home or shed. Ground hornets, also known as cicada killers, even burrow into soil. This makes a ground hornet nest difficult to spot unless hornets are actively coming or going. Bees’ nests will have visible hexagonal cells, and yellow jackets’ nests have a textured swirly gray exterior and multiple entrances.

STEP 2: Spray the nest with insecticide.

Ideally, spray at night when the hornets are all “at home” and less active. After donning protective gear (including long pants, long-sleeved shirt, socks, gloves, and goggles), grab a can of commercially prepared insecticide. Often labeled as long-distance or flying insect spray, the best wasp spray should be capable of propelling itself for some distance, so homeowners don’t need to get too close. Be aware of the wind when using this method; on a windy day homeowners may find the insecticide blowing into their face while spraying the nest. Using a flashlight to help aim, spray the hive thoroughly according to the directions on the can. Watch closely for swarming hornets, and leave the area if necessary.

STEP 3: Wait a few hours and spray again if any hornets remain.

It’s not safe to remove the nest unless the homeowner is reasonably sure that all of the hornets have been killed. Wait at least several hours (overnight is better), and observe the nest to see if any hornets are coming and going. If they are, spray again, and continue this process until no more hornets remain.

Take back your yard
A top-rated pro can help. Get free, no-commitment estimates from exterminators near you.
Find a Pro

STEP 4: Remove and dispose of the nest.

Once there is no more hornet activity, use a pole or broom to dislodge the nest from its location, preferably directing it immediately into a trash bag. Remember that it is soaked in insecticide, so dispose of it properly to avoid risking the health of other beneficial insects.

Commercial insecticides are not the only hornet removal option; there are also more natural methods available. One such method is to purchase a hornet or wasp trap, but a homemade version is just as effective. Take a plastic 2-liter soda bottle and cut the top off just above the label using scissors or a utility knife. Place bait in the bottom part of the bottle: ripe or overripe fruit, juice, canned cat food, or soda will all work. Then flip the top part of the bottle over so it looks like a funnel and place it back inside the bottle; this will funnel the hornets down into the bottle when they come looking for the scent source, but it makes it very difficult for the hornets to get out. Tape the top edges together for security, and place the trap near the nest. Remember that the goal of this trap is to attract the hornets, so it’s not a great idea to put it right on the patio. When the trap is full of hornets, seal it carefully in a bag or tape over the top and dispose of it in an outdoor trash receptacle or place it in the freezer overnight. The cold will quickly kill the hornets, and then they can go in the compost pile.

If wasps have become annual visitors, it might be possible to get ahead of the problem. “If hives tend to occur year after year in the same spot, a pre-emptive spray of botanical oils in the nesting sites can dissuade the hornets from building there,” says Smith. “There are [also] several professional-grade organic dusts and sprays that act more as a repellent than an insecticide. It is possible to utilize these on a regular basis to ‘haze’ the hornets and drive them elsewhere.”

STEP 6: Close off entry points in the foundation or walls.

Hornets are crafty; they can get in through tiny cracks looking for food or a new place to nest, and foundation cracks are particularly attractive. Fill and seal cracks or gaps in exterior walls, around windows, and along the foundation to reduce nesting opportunities and prevent hornets from getting inside.

Tree cavities are some of the most common nesting spots for hornets. “If hornets tend to nest in a cavity of a tree or an opening in a structure, those cavities and openings can be filled in with an appropriate construction-grade expanding foam or similar,” recommends Smith. “This exclusion method can be very effective at causing future hives to develop elsewhere.”

The smell of garbage on a hot summer day is an irresistible draw for hornets. On the one hand, they may be so focused on getting to the source of the scent that they ignore any humans or pets in the area. On the other, one particularly ripe trash can will draw hornets from neighbors’ nests as well. Homeowners will want to rinse out the trash can at least weekly and anytime they notice its odor. In addition, keep the can covered or closed to reduce access to it.

Flowers smell much sweeter than trash does, but to a hornet, sweet is sweet. An overgrown garden full of aphids and other small flies is like a buffet for hornets. Keep grasses trimmed back and shrubs aerated, and don’t place heavily scented flowers near a dining area or frequently used pathway.

STEP 9: Call in a professional to remove hornets and keep them away for good, especially if you are allergic.

Homeowners who are allergic to insect stings of any kind should not take this task on themselves. Spraying or trapping can release hornets unexpectedly, and if their venom is poisonous to anyone in the household, it isn’t worth taking the chance. If no one in the home is allergic and spraying hasn’t worked, or if the nest is too high to reach with spray, calling in the professionals may be the best option. They’ll know how to get rid of a hornet’s nest safely and will be equipped with the proper tools to do so. In addition, if the hornets keep returning, a professional will have suggestions and treatments to encourage the hornets to find a new home. They can also advise on how to get rid of wasps in the house that have flown in from outside and how to keep them out.

Whether the homeowner decides to handle the removal themselves or call in a professional for assistance, they should use caution as with any insect that can cause injury. After the nest is removed, consider some additional prevention. Smith recommends a few methods to make previous nesting spots uninhabitable. “Preventing the return of any flying insect can be very challenging,” he says. “But if hives tend to occur in the same places, repellent sprays (both insecticidal or organic botanical oils) can deter nest building in certain areas. And excluding these hives from forming by closing up openings and cavities can drive the hornets to take up residence somewhere else.”

Hornets are beneficial insects when they’re pollinating the garden, but they’re not safe to allow near areas meant for relaxing and spending time outdoors. If hornets are still making themselves at home after a homeowner has taken these steps, a pest control specialist can give them back their outdoor space by getting rid of these pests for good.

TAGS:
PESTS
HOW TO
MAINTAIN
More From Bob Vila

How Much Does Hornet Nest Removal Cost?
Advertisement

How To Get Rid of Bees (Without Harming Them)

How to Get Rid of Starlings Effectively and Humanely

The Best Bee Removal Services of 2023

The Dos and Don'ts for Landscaping Around Trees

10 Plants to Grow for a Pest-Proof Yard