What’s the Difference? Hornet vs. Wasp

We take a look at how to tell a hornet from a wasp, and whether either insect poses a threat to your property or personal safety. 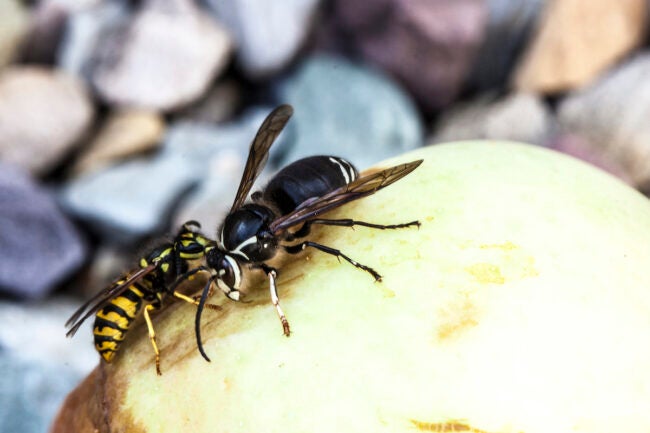 From a young age, most children are taught to shy away from contact with hornets or wasps. Certainly, it’s wise advice for inquisitive kids. Nature gave these insects bright stripes for a reason.

However, while this certainly is a warning that these bugs can be dangerous, it is largely a defensive move; there is no need for an offensive one in response. Attacks are relatively rare if wasps are left undisturbed, though nest-building in homes and businesses can cause problems.

As a result of understandable caution, most people know little about these fascinating creatures, and hornet vs. wasp debates can often be misinformed. This short but detailed article looks at the difference between wasp and hornet size and behavior, and whether our caution is justified.

Related: 10 Types of Bees All Homeowners Should Know

All hornets are wasps, but not all wasps are hornets.

According to a variety of wasp-focused websites, there are anywhere from 15,000 to 30,000 different types of wasp in the world. The largest can exceed 2 inches in length.

Basically, a hornet is just another kind of wasp. Most of those in the United States are closely related to the yellow jacket wasp with which many people are familiar. There are three types of hornet usually found in North America: the European or giant hornet, which is the most common, the smaller bald-faced hornet, and the sand hornet (also called the cicada killer), which is not seen as often because they live in underground burrows.

Hornets are larger, while wasps are brighter.

The main focus of the wasp vs. hornet question usually seems to be about size, so let’s clear that up. The European hornet is the one most people are likely to encounter. It grows to around 1 inch long, which is about twice the size of a yellow jacket wasp, or our other common wasp, the paper wasp.

Hornets tend to be duller in color—brown with yellow stripes. The bald-faced hornet gets its name from its black and white head. Yellow jacket wasps, as the name suggests, are much brighter with distinct black and yellow stripes. Paper wasps are not as bright, and may have red patches. Paper wasps are easy to identify in flight. They don’t pick up their legs like wasps and hornets, so the legs dangle.

There is another insect some call a red hornet, which grows to about 1 inch long. Scientifically, it belongs to the same group, but in fact, it is a red paper wasp, not a hornet at all.

Both are considered beneficial, predatory insects.

When faced with a hornet or a wasp, many people reach for an aerosol spray to kill them, but there are good reasons not to if it can be avoided.

Gardeners in particular ought to be glad to see hornets and wasps around the yard. Many varieties of wasp are good pollinators, feeding off nectar in the same way as bees. Both wasps and hornets also are efficient predators, killing aphids and caterpillars. Wasps may not eat these pests, but they feed them to their larvae. Hornets do both.

The impact of hornets and wasps on our environment is much more important than most people realize. Online magazine The Sustainability Times estimates that the benefit to worldwide food crops provided by their predatory activity could be worth as much as $416 billion.

Hornets are more aggressive when threatened.

Hornets are extremely defensive if their nest is threatened and, being the largest of the wasps, quite naturally have a more painful sting. However, there is a misunderstanding that hornets are naturally more aggressive all the time. This is not the case. Left alone, hornets are relatively placid.

In fact, it is yellow jacket wasps that are more likely to sting you. Interestingly, hornets, being carnivores, aren’t attracted to sugary drinks or the contents of your picnic, whereas yellow jackets can be a real nuisance when eating outside.

There have been lurid headlines about the Asian giant hornet, which has started to appear in the United States. Researchers have given it the undeserved nickname of the “murder hornet.” Although it is very large and intimidating, it preys on other wasps, not people. Plus, while its sting is very painful, it is highly unlikely it would be lethal. Currently, Asian giant hornets are rare.

Both are social insects, though some types of wasps are solitary.

The warnings we receive as kids are likely to have us picture hornets and wasps as lone insects, flying around the garden looking for someone to sting. Though some wasps are solitary creatures, many (including hornets) belong to a group called eusocial wasps. As you might guess from the name, they live in family-type groups.

Nest activity is similar to that in a beehive. Inside, the wasp or hornet queen spends her life laying eggs. She is fertilized by one of a small group of males. Activities like nest building, feeding the larvae, and defense of the nest all are done by sterile females.

Almost all wasps die in winter. With some kinds, a mated (pregnant) female survives. In others, it’s a larva that will become a queen. In either case, there is a single individual who begins the colony again when the warm weather arrives.

Related: Solved! What to Do About Wasps

Most hornets and wasps build their nest (or hive) from chewed wood fibers mixed with saliva, turned into a kind of paper. They can often be found in tree hollows, rotting logs, or hung from branches.

Unfortunately, barns, garages, and building overhangs also provide a nice, sheltered place for these insects to build, so a wasp or hornet nest can come into close contact with people. We are rightly cautious, because this is where hornets and wasps will become particularly aggressive.

If the nest is in a position where it isn’t causing a direct problem, it can remain there until the winter and then be removed when all the wasps have died naturally. Wasp nests do not cause structural problems; they are simply “glued” to the existing surface. Wasps never return to an old nest either, though they may start a new one in the same location.

If the position of a wasp nest is causing a problem, it is best to contact a pest control professional to remove it, rather than trying a DIY approach with purchased products—especially with a hornet nest. Should the insects swarm in defense of the nest, it would be very dangerous to anyone lacking adequate protection.

How Much Does Hornet Nest Removal Cost?
Advertisement

The Best Bee Removal Services of 2023

13 Ways to Childproof Your Yard and Garden

The Great Pretenders: All You Need to Know About Composite Shakes...

12 Tiny Gardens You Can Grow on a Tabletop

These Trees and Shrubs Thrive in Containers