Vole vs. Mole: How to Tell Which Pest is Tunneling Through Your Yard and Garden

Both moles and voles can burrow through a backyard, laying waste to carefully tended gardens and lawns—but that’s where their similarities end. Read on for a rundown of vole vs. mole characteristics and how to tell these two pesky animals apart. 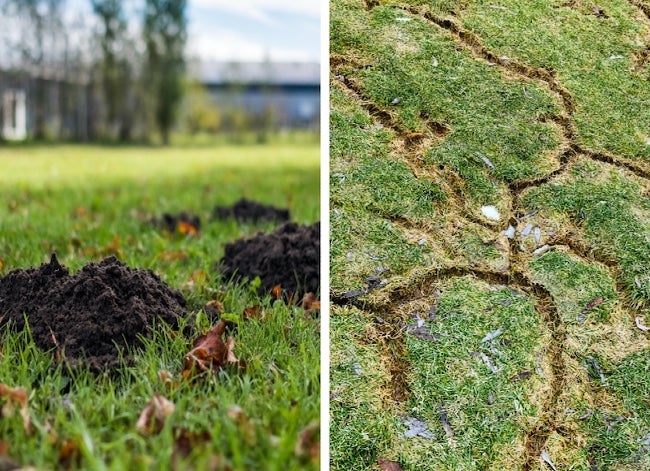 Here’s a riddle: What’s nearly blind, eats insects, and can be found in both your backyard and the local arcade? If you guessed “moles,” ding-ding-ding! That’s correct. Whether you’re whacking plastic versions with a toy hammer or trying to eradicate the all-too-real animals that demolish your yard, moles are sneaky little critters that can be difficult to dispatch.

Or maybe your first thought was “voles.” Understandable. Both are havoc-wreaking, pain-in-the-neck pests. Yet while there’s only a one-letter difference between their names, the animals themselves are not all that much alike. Here’s a quick guide to distinguishing voles from moles and identifying the types of damage each can do.

Take the biggest potato you can find and fashion one end into a sharply tapered snoot. Add two large flippers, one on either side of the potato’s girth and each equipped with long, sharp, scary-looking claws. Put a pair of smaller limbs at the other end, almost as an afterthought. Cover it with velvety brown fur.

Congratulations. You have made a mole.

These strange-looking subterranean animals use their broad, spatulate forepaws to “swim” through the soil in search of earthworms to eat. Averaging a mere 7 inches long, moles are incredible diggers. In just one day, a mole is capable of digging more than 200 yards, and in so doing, displacing an astonishing 540 times its own body weight in soil.

One more surefire sign you’re dealing with moles instead of voles is actually an absence: While moles have both eyes and ears, neither are readily visible. Instead, they are located under the animal’s fur, which keeps them safe and sound from the surrounding soil that would otherwise enter the mole’s ear canals and eye sockets.

RELATED: These Nocturnal Pests Only Come Out at Night

Voles are nocturnal and timid, so there’s not much chance that gardeners will see them while weeding on a sunny spring morning. And even if they do, the vole might easily be mistaken for a mouse; they’re both rodents, with a similar shape and coloring. On closer inspection, observers will see that voles are stockier and more compact than mice, with much shorter tails and smaller facial features.

In fact, voles are tiny in general; woodland voles, the smallest species, are less than 4 inches long and weigh no more than 1 ounce—about the same as five grapes. They have soft, thick, dense fur and eyes that could be described as “bright.” (Although exasperated gardeners might use the term “beady” instead!)

Voles prefer plant matter, such as roots, bark, and bulbs.

Of course, voles aren’t going to stand still for a lineup to let you view their fur, forepaws, and other features. Another approach to collaring this culprit, therefore, is to check out the trees on your property. Voles love to snack on bark, using their sharp, chisel-shaped teeth to strip a tree’s base bare. This is a common rodent behavior called “girdling,” which can kill tree limbs or the entire tree itself. They’ll also happily munch strips of bark from more mature trees, in addition to their roots.

Voles also enjoy bulbs, tubers, plant stems, and seedlings—if it grows in your yard or garden, chances are these ravenous rodents consider it delicious. Meadow voles can consume 60 percent of their body weight each day, which can lead to extensive garden damage. Often, their feasting leaves nothing but a row of holes where tubers once grew. If your carrots disappear one by one, like in a scene from a Bugs Bunny cartoon, you probably have a vole problem.

Moles are insectivores, and voracious ones at that. They can consume up to 100 percent of their own body weight every day, totaling an average of 50 pounds of earthworms, grubs, and beetle larvae annually. Interestingly, moles’ saliva contains a toxin that causes paralysis in its prey; this enables the mole to store its food, still alive, for consumption at a later time.

So if your bean plants have bite marks, it’s not moles that are to blame. On the contrary, a mole’s diet of insects can be beneficial to a vegetable garden, as it prevents these pests from destroying plants and seedlings. Whether that advantage outweighs the unsightly appearance of mole tunnels and hills, however, is another matter altogether, and one that homeowners will have to weigh for themselves.

RELATED: How to Get Rid of Grubs

When it comes to unwelcome visitors, voles are arguably among the cuter nuisances. Much like their country-mouse cousins, they have something of a Beatrix Potter vibe, and their garden-ravaging antics would give Peter Rabbit a run for his money. So it makes sense that they make their nests near gardens. But that’s essentially the only resemblance between the charming animal characters of fiction and these harmful varmints that can cause tremendous backyard carnage.

Voles love low but dense vegetable cover, both for camouflage and to avail themselves of nesting material. They frequently nest beneath shrubs or ground cover plants but can also be found in woodpiles, under thickly layered mulch, and even in snow.

While voles do occasionally tunnel underground, usually in search of tasty tree roots and other subterranean snacks, they more commonly create “runways” on the surface. These are narrow paths made by nibbling grass and other vegetation. Over time, the damage voles inflict on plants, shrubs, and trees can cause costly problems for homeowners.

RELATED: How to Get Rid of Gophers

Aside from serving as the foundation of many a metaphorical mountain, molehills are a clear sign that this critter has moved in—or rather, under. Moles live an entirely subterranean existence, and their hills only hint at what’s beneath the surface: an expansive system of tunnels, “larders” where moles can store their earthworm provisions, and sleeping dens.

Moist, loamy soil is the most hospitable to moles, as it’s much easier to tunnel through than clay or compacted soil. Moles’ subsoil living spaces are generally 8 to 12 inches deep, with one exception. When a mole is actively searching for a mate, it will tunnel just beneath the surface, enabling it to pop up at intervals and scan the surroundings for potential partners. A solo mole’s territory can comprise more than 2 ½ acres.

How do moles live and breathe underground? Thanks to a unique type of hemoglobin in their blood, North American moles are able to tolerate much higher levels of carbon dioxide than other animals. This allows them to rebreathe their own expired air, an essential ability in the low-oxygen environment they inhabit.

8 Stinging Caterpillars All Home Gardeners Should Be Aware Of

10 Smart Solutions for Keeping Animals Out of the Garden Without ...
Advertisement

The Best Mole Repellents of 2022

Solved! What Animal is Digging Holes in My Yard?

10 Things I Learned from Moving During a Pandemic