Hearing suspicious scrabbling behind the walls? This is a common sign of mice—and chances are there’s more than one rodent in the house. 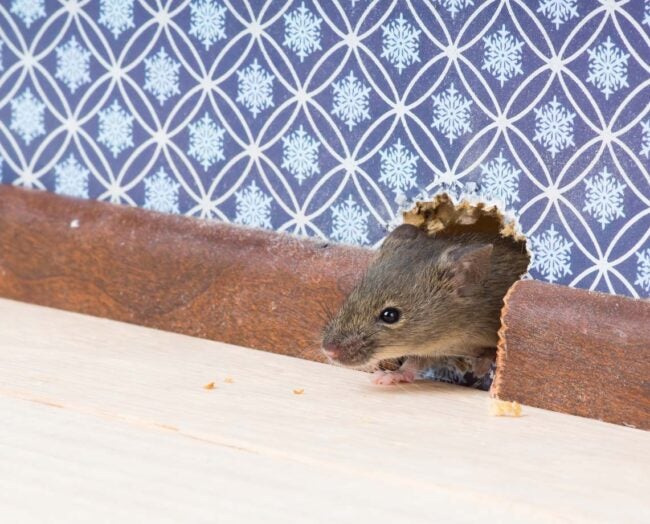 Q: Recently I’ve been finding small black pellets in the basement, and I hear scratching noises when I go down there. I’ve also noticed that my pantry has a sharp, musky odor. I’m starting to be suspicious: Could these be signs of mice?

A: There are certain signs that signal the presence of a mouse in your home—or many mice, since if you see one mouse, you likely have more. A single mouse rarely stays single, and one female mouse can produce as many as 10 litters in a year. Mice are born about 20 days after mating and are capable of reproduction within 2 months. Because of this fast procreation, mouse infestations can rapidly escalate beyond a homeowner’s control, posing a hazard to food in storage, electrical wiring, and even your health, because mouse droppings carry harmful bacteria, diseases, and viruses. Even a small number of house mice can cause large problems, so it is important to recognize and attend to an infestation as soon as possible. A common pest control myth is that mouse infestations are only a winter problem, but mice are opportunistic creatures that can make an appearance year-round. Read on for a few common signs of mice in a home.

There is evidence of mouse droppings in the home, especially near food sources or potential nesting areas.

Droppings are one of the most common indications of mice infestations that homeowners notice. Mouse feces are found in areas where mice are most active, near feeding, breeding, and nesting areas—commonly on pantry shelves or high cupboards. So what does mouse poop look like? Droppings are black, cylindrical in shape, and between 3 and 6 millimeters (about ¼ inch) in length. They are fairly easy to distinguish from rat droppings by their size and color—rat poop is larger and shiny. Older mouse droppings may be brittle and look similar to bits of dirt. Mouse droppings resemble small grains of rice and are commonly mistaken for cockroach droppings. It’s advised to always wear protective gloves when disposing of mouse droppings; in heavily infested areas, it’s also recommended to wear a respirator. Don’t sweep or vacuum the droppings—disturbing them could release bacteria and virus particles. This is especially true of droppings that have dried out and started to flake. Droppings need to be carefully picked up and disposed of in sealed plastic bags, or left to one of the best mouse exterminators (such as Terminix, Orkin, and Ehrlich Pest Control) to remove.

The residents find evidence of nests or burrows, such as shredded paper or fabric.

Once mice enter the home, they will use whatever scraps they can find to make a nest. Bits of fabric, plants, cardboard, and insulation are all fair game. Small gaps in walls, baseboards, or cabinets may seem small, but they could actually be a sign of a big problem. Mice make holes and burrows in dark and secluded parts of the home that do not get much traffic such as in attics and behind furniture. Mice may also chew holes in cavity walls in order to nest inside. Look for droppings, scraps, or dirt marks—these could be clues that the nest is nearby. Mice can also be pests that nest in gutters or live in garages, so be sure to check for the same signs there, too.

Residents can hear scratching or scrabbling noises in the walls, in the ceiling, or under the floors.

Unless you live in a soundproofed home, you will probably be able to hear strange scratching or scrabbling noises in the walls when you have a mouse problem, especially at night. Mice are excellent climbers and jumpers, and they are capable of fitting through openings much smaller than their bodies; they can use the spaces in between joists to travel from one part of the house to another. Sometimes it may even be possible to hear light squeaking. Mice are typically nocturnal creatures, so you will probably hear them only at night. Sometimes pets are better at picking up on these noises than people are, so if the family dog or cat is on high alert, it may be hearing mice in the walls.

There are tracks, or “runways,” signaling frequent rodent activity.

Mice run through dirt and dust constantly. Over time, the dirt from their feet will create a distinctive streaking or smudging along the floor. You may also find small patches of urine or droppings along the route. What does mouse pee look like? You may see yellowish streaks which get crusty as they age. If you can’t tell if you’re seeing mouse urine, shine a flashlight or black light around to get a better look. Additionally, footprints will be especially visible in dusty corners; you can also sprinkle flour or another powdery substance along a suspected rodent roadway and check back later for footprints. Once the mice are gone, it may take some special floor cleaning tricks to get the greasy stains out.

A regular pattern of dirty smudges along walls could be a sign of mouse traffic. Mice tend to run along walls and follow the same route night after night. This is because mice have poor eyesight and need to use the walls to navigate the home. Over time, dirt and grease from their fur will rub off on the walls or baseboards, creating visible markings. Try rubbing the marks with a rag—if they smear easily, they are relatively fresh, which means a mouse has taken that path recently.

Mice have teeth that grow continuously, so they need to gnaw on hard, inedible materials. Mice and other rodents chew on PEX pipe, wood, plastic, cables, and electrical wiring to wear them down. This makes mice a serious fire hazard, as they can chew through shielding and wiring, which can cause shorts, power outages, equipment damage, or fire.

If you find unexpected holes, tears, or signs of gnawing in bedding, clothing, insulation, fabrics, or other materials, it is a good bet that mice are present. Mice use shredded materials to build nests, which are usually located in dark corners, drawers, cabinets, or storage boxes, or behind fridges and other large, seldom-moved appliances. You may notice that you are suddenly in need of a furniture makeover, as mice will often chew small holes in the bottom of drawers, cabinets, and couches and fill the holes with shredded material. Parts of the home that are unfinished or under construction (such as an attic) may be particularly appealing to mice. One way to tell the difference between gnaw marks and other damage is if the hole has a jagged shape with dark grease marks on the outside.

Got mice?
Maybe it's time to call a pest control pro. Get free, no-commitment estimates from exterminators near you.
Find Local Pros

There are unusual and unpleasant smells that signal the presence of mouse urine or deceased mice.

Mice urinate frequently, and they have a distinctive, strong ammonia-like smell that’s reminiscent of stale urine. This odor can be particularly noticeable in enclosed areas, such as pantries, cabinets, or drawers, and may require a few kitchen odor cures to eliminate. The smell may also be evident along baseboards and walls where mice frequently travel; the odor helps them establish and mark their territory. The smell may be faint at first, but it will become stronger as you get closer to the source. It will also be particularly strong if the infestation is severe. In some areas that mice frequent you may find urine pillars. What does a mouse urine pillar look like? These are lumps made of urine, dirt, and grease.

Residents notice that there is damage to their food containers.

One adult mouse can consume between 3 and 4 grams of food per day. So what attracts mice? They like many of the same foods humans do: cereals, grains, seeds, nuts, fruits, meats, chocolate, and candy. Mice especially like foods that are high in fat, such as bacon, cheese, and butter. They will make up to 30 visits a day to an identified food source, such as a pantry or cupboard. Strange holes or mouse gnaw marks with grease smears around them are indications that mice may be raiding your pantry. Compost heaps attract mice as well, whether they are outdoors or on a kitchen counter. If you think you’ve been sharing food with mice, throw it away—food that has been contaminated by mice may cause dangerous illnesses in humans, including salmonella and hantavirus.

Pets show sudden interest in certain areas of the home or other unusual behavior.

Chasing mice is typically considered to be a feline pursuit, but both cats and dogs can pick up on rodent activity in the home. If mice are nearby, odds are that a pet will see or smell them before anyone else. They may begin to behave strangely, whining or barking at the walls or underneath furniture. Pets may also pick up on high-pitched squeaking that their owners have to strain to hear. Be sure to investigate any new areas where pets have started to take an interest.

The resident sees one or more live or dead mice in their home.

Finding a dead mouse in the house—or, heaven forbid, seeing a live one—is a sure sign that you have a problem. Whiffing a dead mouse smell is one thing, but seeing a mouse out and about during the daytime can indicate a particularly heavy infestation, one that might require the services of a trained pest control professional to eradicate.

While it may be tempting to simply put out a few traps to save on exterminator costs, this usually isn’t enough to fully eradicate all mice from the home. Mice reproduce quickly, so if the problem isn’t tackled effectively, you could be dealing with a larger infestation than you bargained for. It’s also important to get rid of rats, mice, and other rodents as soon as possible because they pose a very real health risk—contaminated urine, feces, or saliva can carry harmful diseases such as hantavirus. Pest control specialists are experts both in how to get rid of mice and also mouse proofing to keep the rodents from coming back. For established or heavy infestations, mice exterminator costs may be well worth it to take back your home.

How To: Catch a Mouse

How Much Does a Mice Exterminator Cost?