Convenient to use, this blender can achieve a puree that’s crucial to a good smoothie. 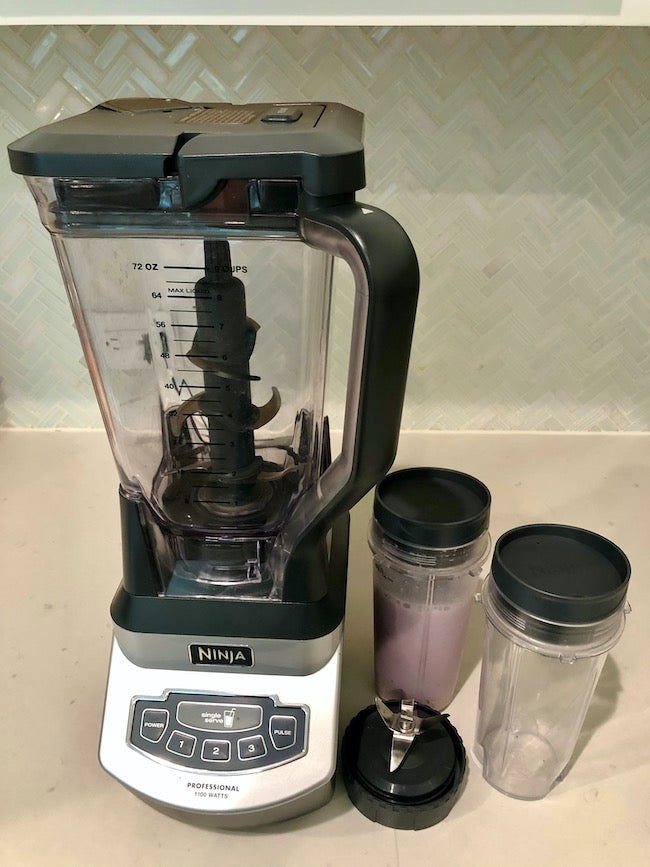 When the old blender finally gave up in spectacular fashion, I knew that my attempt to repair the cracked base with superglue had failed. The base separated from the container mid-blend, spewing a semi-mashed morass of milk, strawberries, protein powder, and banana throughout the kitchen and onto my shocked face.

It was time to invest in a new blender.

Looking for an Upgrade

My relationship with our old blender was love-hate. While it did an admirable job of chopping up fruit, vegetables, and other foods, it left much to be desired when it came to making smoothies. Even after extended blending cycles, there always seemed to be a few stubborn chunks of strawberry or banana that had somehow managed to evade its whirring blade.

I also needed to premix the protein powder with the milk prior to blending it. If not, at least a little of the dry mix would cling relentlessly to the side of the container, despite my best efforts to force it loose by increasing the blender to max speed. In the end, I was usually forced to use a rubber spatula to scrape the powder free from the side and reblend. I wanted a blender that would easily help me achieve puree.

Having been through several budget-priced blenders that did a marginal job of blending and always ended up leaking (or exploding), my wife and I decided we needed to expand the budget for a new blender. And while we love a good breakfast smoothie as much as anyone, we weren’t willing to throw down $300 to $400 to liquefy fruit. We felt a mid-tier blender in the $100 to $150 range would help us achieve that smoothie consistency we longed for.

Our Choice has Options

Our pick came down to expert advice (my mom’s) and design. While Mom’s high opinion of her Ninja’s blending power was a strong motivating factor in our decision, the Ninja also was the only blender that used not just one but three sets of large blades to cut. (Surely my strawberries and bananas could not escape three sets of spinning blades!).

I also liked the fact that the Ninja BL660 came with an adapter and two tumblers that would allow us to blend individual smoothies. My wife likes soy milk and almond milk while I’m a connoisseur of cow milk, so making our smoothies together isn’t an option. And, at $120, the Ninja BL660 fell right in the middle of our budget.

To be honest, my first impressions of the Ninja were a bit mixed. Our last blender was about half the cost, but it had a thick glass container and metal parts that connected the motor to the mechanism that operates the blades on the container.

The Ninja BL660’s container and moving parts consisted of plastic. Would it hold up? On the flip side, the triple-blade I was so excited about didn’t disappoint. Not only were there three blades, but they were long, curved, and sharp enough to make me a little nervous about handling it. In short, it wasn’t difficult to see how the Ninja’s designers came up with the product name.

Upgrading from Chop to Puree

Those triple-blades do not disappoint. Even on its best days, our old blender would produce a smoothie that was liquid enough to drink but still had a consistency of tiny chopped-up pieces accompanied by a gritty texture from the protein powder.

The Ninja produces a smooth puree comparable to those you might buy at the local overpriced juice shop. It even makes short work of ice, frozen berries, and harder fruits like pineapple and apple.

The Ninja also has no problem thoroughly mixing the protein powder into the smoothie so that it’s unnoticeable. However, you still need to add the protein powder last to prevent it from potentially gumming up around the base of the container.

As much as I love the triple blades of the larger container, we actually use the individual smoothie containers and the smaller adapter that fits with them more often. While adding convenience, the smaller adapter’s two sets of smaller blades work just as well with the tumblers as the triple blades do in the container. I can make two smoothies in separate drinkable containers for my wife and me in the morning, saving me the work of cleaning a large container in between smoothies.

We’ve had the blender for almost 6 months and it’s seen almost daily use. In fact, we’ve even used it for grinding our own hamburger, something we never did with our old blenders. My fears regarding its plastic construction appear to be unfounded. The plastic locking design used for the base and the lid both feel sturdier than our previous blender.

My only real gripe, and it’s a small one, is with the controls for the tumbler adapter for the individual containers. When blending with the tumbler, you must hold the button in manually for the blender to run, which means I have to stand there for the 20 seconds or so it takes to blend the smoothie.

Aside from that minor complaint, the Ninja is an excellent blender at an affordable price point that can make smoothies that are actually smooth.

Get the Ninja BL660 Professional Countertop Blender at Amazon for $109.99.

The Best Blenders for Ice Crushing

The Best NutriBullets for Your Lifestyle

The Best Immersion Blenders for the Kitchen