Turning a Frown Upside Down: Repurposing Bricks to Make a Walkway

No one likes cleaning up after a storm. But when the storm causes structural damage to your home, the cleanup process is even more distressing. Sometimes, however, you can find a silver lining in those dark clouds.

A case in point came several years ago, when we found ourselves in the unfortunate position of having to replace a brick wall that had been ruined by a hurricane. Once we repaired the wall, we were left with a large supply of used bricks. Rather than pay to have them hauled away, we decided to repurpose the bricks and construct a decorative walkway between a flower bed and the front lawn.

The project began with digging—lots and lots of digging. In hindsight, it might have been a good idea to rent a small excavator, but at the time we didn’t realize it would be such a time-consuming and back-breaking process to dig out a small patch of lawn. Trust me, if I had to do this again, I would definitely rent an excavator!

We marked off the proposed walkway area with small bamboo stakes and string and proceeded to dig out a trench roughly 18 inches deep by 36 inches wide, running for 25 feet across the front of our house, with another six feet on the side of the house to make the walkway join up with our driveway. Once we had a nice trench, we went to the local garden center and discussed the best substrate for a walkway. We didn’t want something as coarse as gravel or stone; the veterans at the garden center recommended crusher dust, which has a fine, powdery texture. 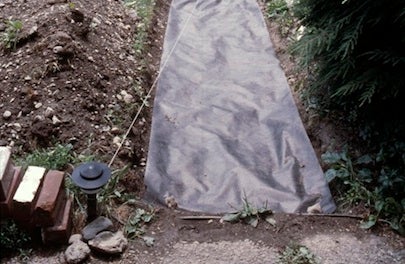 First we lined the trench with a mesh barrier fabric to cut down on weed growth, and then we had a dump-truck-load of crusher dust delivered. Luckily, they were able to dump most of the crusher dust into the trench, thereby saving a lot more shoveling on our part. We did a loose rake on the crusher dust, mounding it in the middle of the trench and leaving room on either side for our bricks.

We took the bricks that had formerly been part of the wall and carefully knocked off the old mortar. We lined the trench with a row of bricks on each side, with the “raw,” red sides facing upward to create a rustic appearance.

Once we had our border framework of bricks in place, we raked out the crusher dust evenly across the width of the walkway and tamped it down. We then filled in between the two rows of bricks with a surface layer of irregularly shaped pieces of slate, in various shades of gray, green and red, creating a smooth and level walkway surface. So now, instead of having a pile of old bricks in the back yard, we have a front yard walkway that is both functional and attractive.

For more on driveways and walkways, consider:

On the Edge: 16 Garden Borders You Can Make
Advertisement

How To: Make a Stone Walkway

15 Affordable Landscaping Projects You Can DIY in a Day

How To: Plant a Vegetable Garden