Chores can be a real drag. But what if we lived in a world where housework was fun and we raced home to get it done? Well, the future is now—and this surprisingly simple DIY will clean your floors while you sit back and watch from the couch! 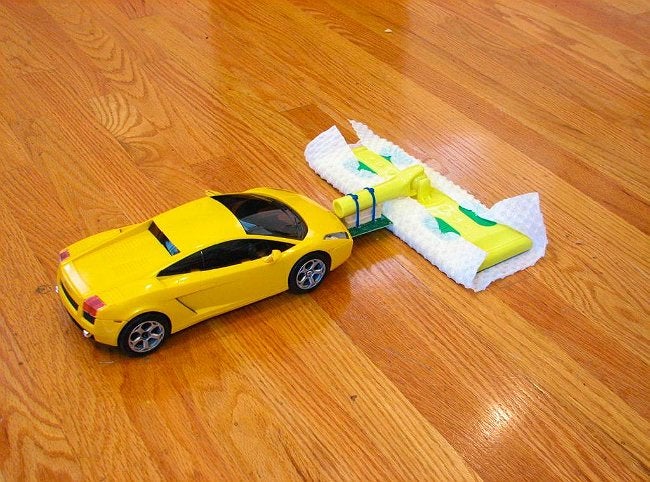 Who says you can’t still be a kid if you’re paying down a mortgage? Whether you’re just starting out on your own, or settled in a two-story house, you can enjoy much of the same stuff you did when you were young—sports games, cool toys, and fistfuls of candy—as long as you can afford it. But part of growing up means accepting at least a few responsibilities, like housework. Keeping everyone’s inner child in mind, Windell Oskay, former physicist and co-founder of the electronics blog Evil Mad Scientist, set out to make everyday cleaning less of a chore. With little more than a remote control car from the toy store and a Swiffer mop head, Oskay designed a fun alternative to the broom: a battery-operated floor sweeper.

He outfitted a scaled-down Lamborghini for the job just by taking the body apart with a screwdriver and attaching a mount for the duster directly to the car frame at the front bumper. If you’re as lucky as Oskay, there may even already be screw holes in the car’s frame for easy attachment.

For a stiff plank, Oskay repurposed a circuit board on its way into the garbage, but you can use almost any material as the connecting board—scrap wood, metal, or plastic—as long as it’s sturdy enough to support the mop. Then he aligned it with the existing screw holes and reassembled the car using screws to secure the board to the frame. Adding the final piece—the mop head—was as simple as binding its handle to the board with a few cable or zip ties.

If you’re trying to recreate the magic at home, know that every remote control car will require a slightly different strategy to attach the board. If you want to emulate Windell’s crazy idea but don’t have a remote control car, head over to CarBibles’ review on RC cars to learn more.

When your car mop starts picking up dust, you’re on the right track. Need to make an adjustment? Drill additional holes for screws, super-glue your heart out, or use workshop scraps to help hold the mop’s handle steady. Don’t be afraid to be flexible, either—remember, we’re not talking about an 11 o’clock curfew here!

8 Dirty Secrets Your Carpet May Be Keeping from You

7 Unusual Tricks for Your Cleanest Floors Ever