ThermoPro TP20 Meat Thermometer: Is It Worth It?

With this BBQ thermometer probe, monitor what’s cooking outside while you’re inside preparing other food in the kitchen or watching the big game. 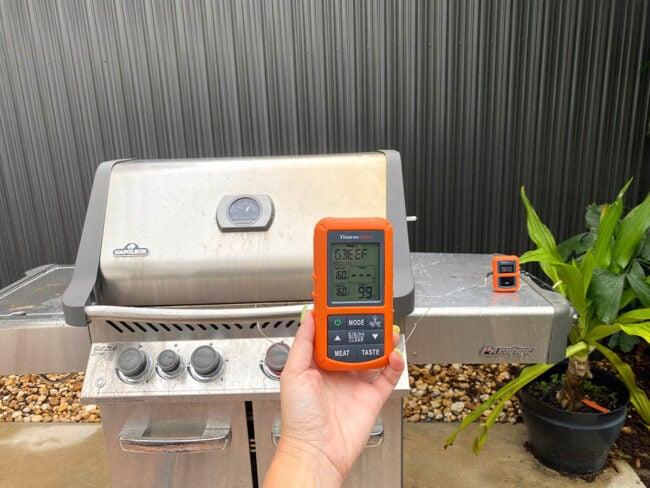 Living in Miami, my husband and I have two kitchen setups that we use year-round. One setup is outdoors with a grill and a smoker, and the other is indoors with a gas stove, a rotisserie, and a convection oven. Sometimes we have several of these devices going simultaneously, making multiple dishes for entertaining. We can cook meats or fish on the fire outside and prepare starches in the air fryer and steam vegetables inside.

No matter the combination of cooking devices used, the back kitchen and patio doors are frequently opening and closing, letting out expensive air conditioning along with an occasional pet that’s too curious for its own good. We needed a solution for keeping an eye on our food cooking outdoors while tending to what’s cooking indoors, and vice versa.

We found a solution that works in the ThermoPro TP20, a wireless dual probe meat and barbecue thermometer. The 300-foot range between transmitter and receiver allowed us to stay in one place to monitor both areas. We also could put a steak for two on the grill and watch the game inside instead of having to watch the meat. This probe let us know when the food reached the preset temperature, and its alarm let us know when the food was ready to put on our plates.

ThermoPro TP20: At a Glance

Get the ThermoPro TP20 at:

What Is the ThermoPro TP20?

The ThermoPro TP20 is a dual-probe wireless thermometer for your barbecue, smoker, or oven. The probes measure with an accuracy of ±1.8 degrees Fahrenheit (±1°C) and can withstand heat up to 716 degrees Fahrenheit.

An orange rubber-coated transmitter and receiver offer large LCD displays that are easy to read in natural and artificial light, and a backlight helps when low-light conditions such as dusk, nightfall, or clouds appear. I found this backlight display helpful in changeable weather conditions, which happen frequently where I live. We can start cooking burgers in bright sunshine and finish them in a thunderstorm, as we did many times. It’s helpful to be able to see the display in the shade or while inside.

The transmitter sends signals to a comfortable handheld receiver over a 300-foot range. This is a lot farther than many other models. It has a wire clip on the back that’s not very useful on a smoker or grill but does hang well from an oven handle. You can also hang the receiver on a belt loop. However, the plastic clip could snap off with frequent use or if you hook it with too much force. For that reason, I prefer standing it up on my counter.

Unlike other wireless models that require an app, I like that I don’t have to download an app to use the nine preset USDA-approved doneness settings, count up/countdown timer, and alarm. Along with a built-in grip that prevents the user from dropping it when things get slippery, the receiver features buttons that are large enough for big fingers. A simple wipe with a sponge takes care of splatters.

How Easy Is the ThermoPro TP20 to Put Together?

The ThermoPro TP20 is powered by four AAA batteries, two for each unit. Unlike some other wireless dual-probe thermometers that require adapters and chargers, the battery covers come off easily with a simple flick of the thumb.

Once the batteries are in, simply turn on both the transmitter and the receiver. They come pre-synced from the factory. Plug the probes in the side of the transmitter, choose between Farenheit and Celsius, and set the probes. If you want to test for ambient temperature, use the clip that comes with the set to tack one of the probes to the rack of the grill, smoker, or oven.

Having tested several probe-style meat thermometers and grill thermometers, I found this one of the easiest to set up. However, if you’ve never used a probe thermometer before, you might be puzzled about what to do with the clip.

Is the ThermoPro TP20 Easy to Use?

For those new to probe thermometers, the ThermoPro TP20 is one of the easier thermometers to use. There’s no app to download, which means your phone can stay away from what is often a greasy or heated situation when you’re grilling or roasting. The buttons are user-friendly and easy to figure out for anyone who’s operated anything as simple as a calculator or stopwatch.

Choose among timed cooking, counting up or down, or from nine USDA-approved doneness preset temperatures, ranging from pork to chicken to veal. There are two settings for beef and poultry: one for boneless and bone-in, and one for ground. You can also set your temperature goals for two proteins, or choose one probe to take an internal temperature and the other to take ambient temperature.

The overall design is sleek, splash-proof, comfortable to carry with grips on the side of the receiver, and handy with holders on the backs of both transmitter and receiver. The holders may prove to be possible design weak points with enough use, depending upon how rough you are with them. While the transmitter can technically hang on a handle and the receiver is made to either hang on a belt or stand on a counter, the metal and plastic parts are respectively a bit flimsy.

Its long, straight probes can be a little trickier for novices. Long and thin with a sharp point, they pierce dense meats easily. But the back end is too heavily weighted and the probe itself is too straight and long for grilling small bone-in cuts like chicken wings, thighs, legs, and even some smaller steaks and chops. The probes will still work to take the temperature at the end of cooking; it’s just a little slower than an instant-read thermometer.

It’s also difficult keeping the probes properly grounded in burgers, sausages, and anything where the tips poke through. If they get too close to the grill rack, they’ll pick up ambient heat and the readings will be off. I had this problem when I was smoking a meatloaf. The probe tips touching the sides of the pan created inaccurate readings.

The same thing can happen by moving the probes into different parts of the meat. If they touch bone or are too close to the surface, you’ll get different readings than expected. While this is half user error and half the construction of the probes, it does take a little practice and experience with different meats to know what works best.

The mesh wires that connect to the probes are thin enough to hang out of ovens, grills, and smokers without causing a draft or an opening that impedes the heating process. Since both probes and wires get very hot, use gloves or a towel to remove the probes.

Where the probes perform best is in the oven, smoker, or rotisserie in large birds, hams, roasts, loins, and shoulders. You can also use them on the grill for whole fish and steak as long as they’re on the bigger side.

Is the ThermoPro TP20 Worth the Money?

Originally priced at $59.99, the ThermoPro TP20 is $3 off at Amazon, Bed Bath & Beyond, and at the company’s online store, so it costs $56.99 at all three retailers. Even with a discount, the ThermoPro20 TP20 is at the higher end for a wireless dual-probe thermometer. However, it’s comparable in price to some of the best infrared thermometers, and it’s about half the cost of a high-quality smart thermometer.

On the upside, this is rugged culinary equipment encased in plastic and rubber that won’t shatter if dropped. It can withstand everything from soot to marinades to rainwater. While not waterproof, it’s easily wiped clean by a soapy sponge. The stainless steel probes also clean up easily, no matter how long they’ve been percolating in a piece of meat and a smoker. I gently washed them after they spent a few hours in chicken legs over hickory chips and they looked new. However, don’t rinse the mesh wires, as it will ruin them; simply wipe them clean.

If the probes are jammed too close to a grill, oven, or smoking grates time and again, they can become damaged and they will stop picking up readings. Wires can also get kinked if you store them willy nilly. Replacement probes are available, but you shouldn’t need to get new ones if you treat the originals carefully and according to the manufacturer’s directions.

Is the ThermoPro TP20 Right for You?

If you’re an avid smoker or griller, love to entertain and cook for a lot of people, or have a bit of the workaholic or perfectionist in you, I think it’s worth investing in the ThermoPro TP20. The user-friendly wireless transmitter and receiver allow you to monitor two places at once, so you can mingle with your guests or prepare other dishes.

Other, less expensive probe thermometer options like the NutriChef Wireless Bluetooth BBQ Digital Thermometer require downloading an app, but not everyone wants to spend more time using a screen. Even though the ThermoPro TP20 has only two straight probes, while the more expensive Inkbird WiFi Grill Meat Thermometer IBBQ-4T has four color-coded curved probes that work better with bone-in cuts (by avoiding touching the bones), the ThermoPro is a capable introductory piece of equipment that is expected to last a long time.

Where to Buy the ThermoPro TP20

Get the ThermoPro TP20 at:

The Best Meat Thermometers of 2022

The Best Grill Thermometers of 2022