Finally, a dimmer for all bulb types that automatically turns on for you when you enter a room. Now that's progress! 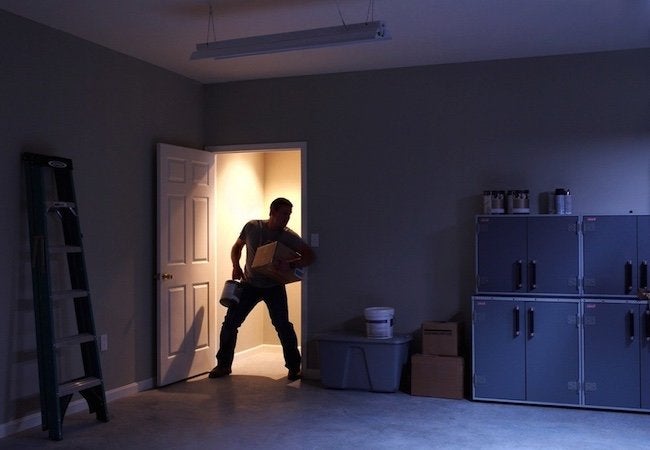 If you’ve bought new light bulbs anytime in the last few years, you know the selection has changed dramatically for the better, with traditional incandescents having been mostly replaced by newer CFLs and LEDs. The transition to more energy-efficient bulbs, however, has not been without its share of hiccups. For example, some people initially struggled to find a next-generation bulb whose output resembles the warm incandescent glow that had become so familiar over past decades. In addition, many homeowners discovered that their old dimmers were not compatible with the latest lighting. Industry leader Lutron has solved that problem by creating a line of cutting-edge dimmers specially designed for use with dimmable CFLs and LEDs. But the company didn’t stop there. With its Maestro C.L Dimmer Sensor, Lutron now offers a dimmer that’s even more fully featured and convenient for today’s homeowner. Leveraging innovative motion-sensor technology, the product actually turns the lights on and off for you, automating your home while saving you time and energy.

Smooth, Reliable Operation
Though dimmers perform a seemingly straightforward role, they are in fact sophisticated electrical components whose proper functioning depends on a variety of factors. When a homeowner uses CFLs or LEDs in combination with a conventional dimmer, the two may work fine in concert, more or less, but the pairing isn’t UL-listed. That means it has not been determined to meet nationally recognized safety standards. Performance issues may also be evident, including:

• dropout: when lights turn off before the slider on the dimmer reaches its lowest setting

• pop-on: when lights do not turn on at a low level, abd the slider must be raised for the lights to turn on

• flickering: when dimmed CFLs or LEDs flicker excessively or turn off when household devices turn on

Lutron eliminates these problems with the company’s advanced, patented technology that provides improved, safe dimmer performance with dimmable LEDs and CFLs. And though the Lutron C•L line works reliably with the latest bulbs, it also boasts compatibility with incandescents and halogens.

Motion-Sensing Technology
Besides smooth and reliable dimming, the Maestro Dimmer Sensor includes a motion sensor. By configuring the simple press-and-hold settings, you can set the dimmer to turn on the lights when you enter the room, turn off the lights when you exit, or both. For laundry rooms and storage rooms—spaces you are likely to enter with your arms full—automatic lighting provides a high level of convenience. You no longer need to set down your load, hit the light switch, and then carry on with what you were doing. The lights go on for you.

The Maestro Dimmer Sensor employs passive infrared technology (PIR) with Lutron’s XCT sensing technology to sense true human movement. It also uses patented technology to detect fine motion, such as turning a page. In tests comparing the performance of Maestro sensors with the sensors from three other major companies, researchers concluded the Maestro sensors were two to three times better at detecting fine motion. That level of precision helps to ensure that you’re not left in the dark when, for instance, you are working on the computer at night.

The Maestro can save even more energy by sensing the amount of ambient light in the room. When in “Ambient Light Detection” mode, the dimmer turns on the lights only if there’s not enough ambient light, whether from the windows or a table or floor lamp. You like even more light? Hit the switch and, over time, the sensor learns your preferred light level and adjusts.

Lastly, don’t worry about the Maestro compromising your decor. Sleek and unobtrusive, the dimmer comes in 27 colors to match or complement any scheme.

This post has been brought to you by Lutron. Its facts and opinions are those of BobVila.com.